You are here: Home / disney / How {I Got} To Spend the Night in Cinderella’s Castle!

So, it was 4:00pm on the second day of the Disney Social Media Moms Celebration (see day 1 & 2 recaps before you go on!). I have my bag packed and am standing in the lobby of the Grand Floridian Conference Center with Andrea, Toni, Crystal, Amy and Briana waiting for OUR PRIVATE CAR TO TAKE US TO CINDERELLA’S CASTLE*! 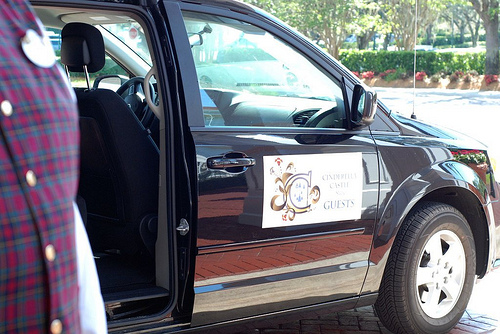 We were whisked away by Sean (our driver, tour guide & recipient of many squeals) to meet our VIP Tour Guide, Steve BACKSTAGE at Magic Kingdom. I’ll tell you, “backstage” is not very magical. It’s just a parking lot. With trash cans. But when you are being driven in a private car (ok, mini van) to meet your VIP Tour Guide because you are spending the night at Cindrella’s Castle–well, it’s pretty darn cool. In fact, we were screaming pretty much the whole time. 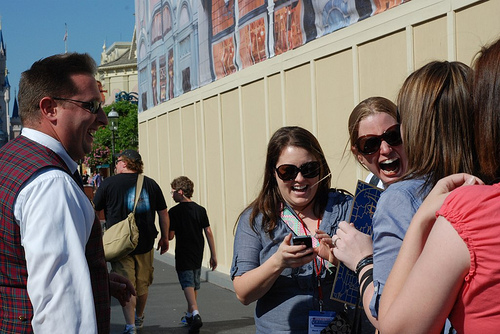 Briana & Amy screaming. You can’t see it but Andrea & Toni are screaming, too. See Steve there? He’s laughing at us.

As we began to walk to our room (IN CINDERELLA’S CASTLE!) Steve gave us commentary along the way. And this would be just the preface to our evening. We were all mesmerized by his Disney-knowledge. He’s like an encyclopedia, or a savant, or google! We took a left and walked through the entrance of Liberty Square and right by Sleepy Hollow (oooh, funnel cakes!) to come along the backside of the castle. We went this way so we could SEE OUR ROOM IN CINDERELLA’S CASTLE! 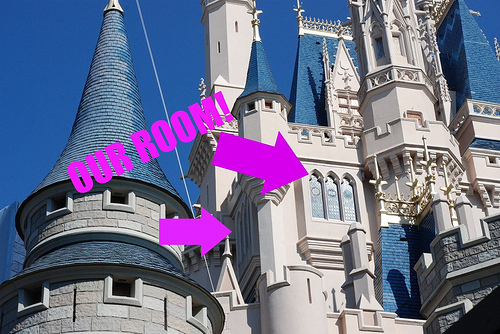 Then we walked in through the castle hallway (what do you call that?) to the last door on the left (or the first on the right if you’re coming from the front) and walked into our lobby. (OUR LOBBY!) Really all it held was a desk for OUR CONCIERGE. Our own private Cinderella’s Castle Concierge!

{{You have no idea how hard it is to portray the squealing, excitement and fast-talking I want to add in this post!}}

Me taking a picture of myself in one of the mirrors downstairs.

Andrea pointing to the clock–always 11:59! 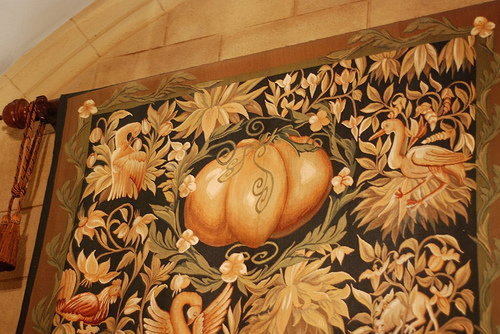 The Fairy Godmother gave this to Cinderella so the pumpkin would remind her of her humble beginnings.

Now, the whole time they are giving us the tour of this tiny office and the elevator (ie. “carriage”) they are acting like we were actually IN the REAL LIVE Cinderella’s Castle and the REAL TRUE Fairy Godmother had given her these pumpkin gifts. And somehow that magic rubbed off on us because…well, just wait…you’ll see. So, we ride the “carriage” up to the suite and in the foyer we find more beautiful decor (from Cinderella and the Fairy Godmother herself)… 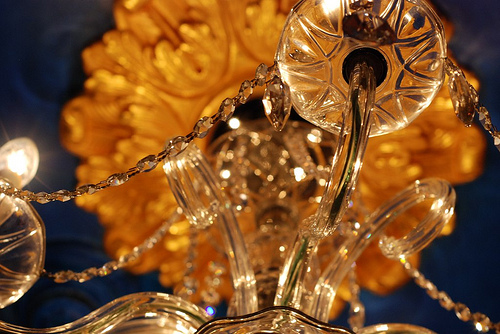 The ceiling was even breathtaking! 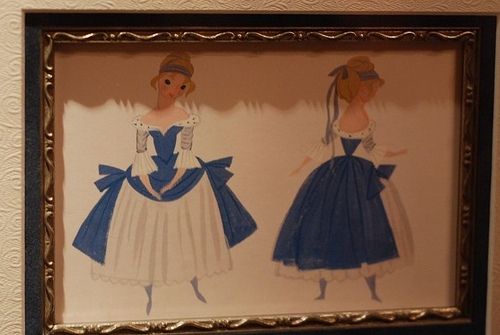 One of many paintings by Mary Blair who designed Small World

Two pumpkins given to Cinderella by the Fairy Godmother. 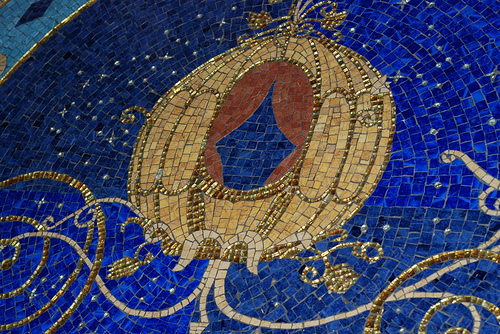 The mosaic floor of the foyer. Stunning.

Can I just stop you here for a sec? WE HAVE NOT EVEN STEPPED FOOT INTO THE ROOM YET! It is just unbelievable!

Finally we get our own Cinderella’s Castle Suite keys and enter the suite. Are you ready for this? 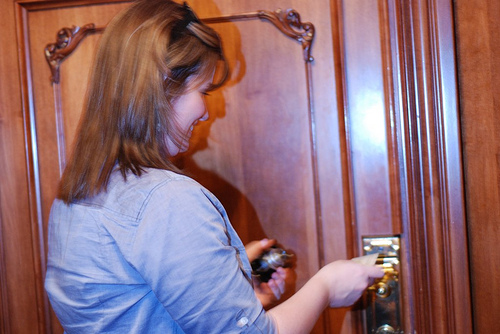 We let Princess Andrea do the honors! 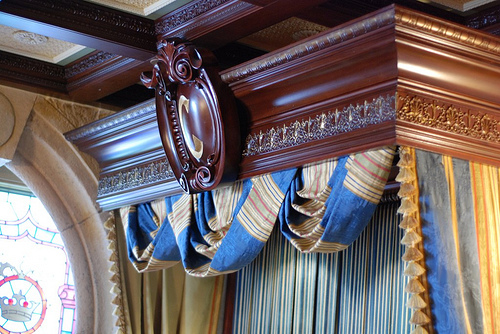 The first room is 2 rooms and a fireplace. Each bed is marked by a “C” for Cinderella and Charming. 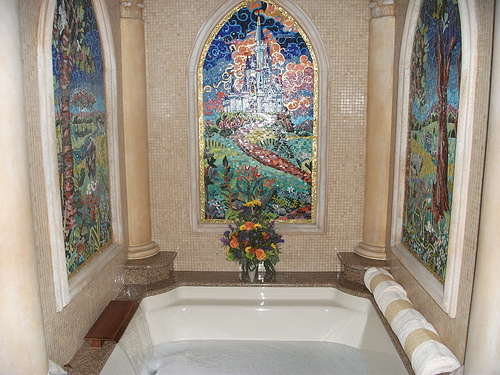 We oohed and aahed. We walked around taking pictures. We tweeted and twitpic-ed. But I certainly did NOT crawl up on the windowsill to get a picture of the new Fantasyland expansion from the highest point in Magic Kingdom! 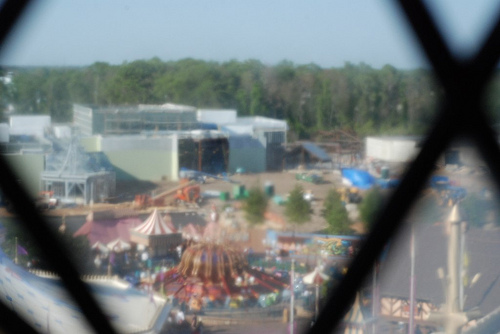 After a few short minutes in the castle, we decided to take Steve out for a road trip. Because Steve was now our personal tour guide for the next eight hours! And we planned to get as much info out of him as we could (Amy had her pen and paper out taking notes!). We hit up Philharmagic, Pirates and Haunted Mansion before we had to get back to our Disney Junior dinner. And the entire time Steve is telling us the stories behind each ride, who did the voices, which Imagineer put an inside joke in the queue and where the Hidden Mickeys were. And that is speaking my Disney-love-language! I LOVE knowing the behind-the-scenes stories.

Steve picked us up from our Disney Junior dinner (Bye, Les! Have fun at the Grand Floridian without me!) and then we headed back to the Magic Kingdom for VIP seating at Wishes and the Electrical Parade. And I think I’m going to have to stop there for now…we’ll do part 2 next week. PROMISE. But before I end this, here’s a picture of us SQUEEEEEing with Steve! 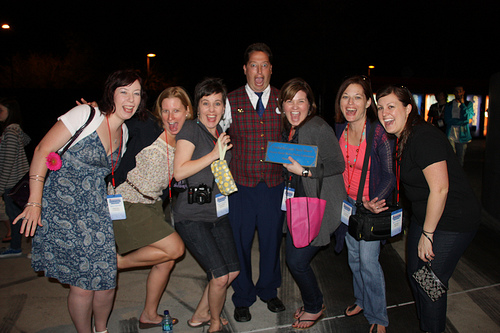 Read the rest of the Castle Girls’ posts:

You Can Be a Disney VIP, too! by Amy at Mom’s Travel Tales

{all photos by me except the bathtub & squeeing pictures are Crystal’s!}

{Part 2 of my Night in the Castle}

*Technically the castle is called Cinderella Castle (which always shows if you’re a Disney newb if you call it the wrong thing). But, can I just tell you that once you’ve been there and breathed in that pixie dust, you KNOW that it’s actually Cinderella’s Castle the same way you’d say, “My best friend’s house” BECAUSE IT IS!!