You are here: Home / disney / I SLEPT IN CINDERELLA’S CASTLE (Part 2)

Finally! We are driving away from our private Disney Junior dinner to watch The Magic, Memories & You (a super cool multi-media show ON the Castle) and Wishes (the fireworks show). But as guests of Cinderella herself we don’t have to stand with sweaty vacationers breathing down our necks–oh no!

Steve waltzed us right in the middle of the only green space in front of the castle! He just opened up a gate in the middle of the sidewalk and in we walked. We were literally LAYING IN THE GRASS as we watched the shows. Not only that we were snacking away on buckets of popcorn, Mickey Mouse Ice Cream bars and bottled water. If I had been on the outside looking in, I would have been tweeting pictures of us to see if anyone could figure out why we were famous. It was that cool. 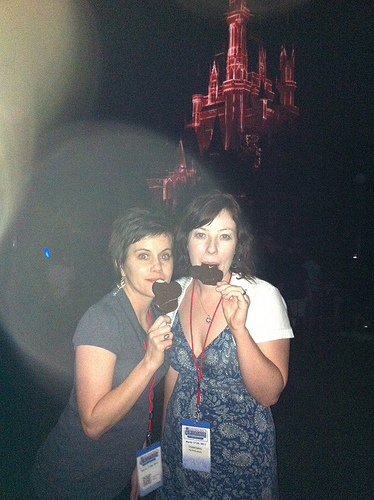 Me & Crystal on the lawn waiting for Wishes!

After the show, we ran up to our room (IN CINDERELLA’S CASTLE!) to change clothes and dump our cameras. For some reason we were too excited to take pictures. Plus it was dark. Then we headed down to our private viewing area to watch the Main Street Electrical Parade. Of course, some of us couldn’t watch it without asking Steve some more questions about security, the scheduling of performers and kidnapping. You know, the usual Disney questions.

All this time, Les had been an honorary member of the House of Hills. But after the parade, Steve let him pal around with us. We hit up the new AMAZING queue at The Many Adventures of Winnie The Pooh (did you know the new movie is coming out July 15?), rode Space Mountain, Buzz Lightyear (where Steve told us how to score BIG!) went shopping and got a tour of the new Fantasyland expansion. (Gotcha! He didn’t give us a tour, just explained it all in massive detail while looking at the map.)

Then Les had to leave because we were going down to the Utilidors! Never heard of that particular attraction? That’s the underground world of the Magic Kingdom! The place where Cast Members can fix plumbing, dump trash, get away from the Small World song and can travel through the Kingdom without being seen! HOW COOL IS THAT?

This is a very top secret place and no cameras are allowed. We even had to have special nametags to get in! But at this point it was like 2am, so I don’t think anyone cared anyway. Not that the Magic Kingdom was quiet. Oh no! The parks are being cleaned, fixed and readied 24 hours a day. It never closes.

While we were in the Utitlidors, Steve told me my new favorite story…

When Walt Disney died in 1966, they were in the middle of planning “the Florida project” or the Magic Kingdom of Disney World as we know it. Walt’s brother, Roy postponed his own retirement to head up the project and make sure that his brother’s dream would become a reality. And he did it–the Magic Kingdom was ready a full month early AND under-budget! Can you imagine?

The day of the opening ceremony, Roy Disney was supposed to speak and open the park to the public and media. Well, he apparently got emotional about his brother’s passing and said, “I’m not going up there without my brother.” The PR guys and others around him were like, “Well, there’s nothing we can do about that! It starts in FIVE minutes! You have to go out there.” Roy crossed his arms and leaned back in his chair and said, “I’m not going without my brother.” For the next few minutes there was mild chaos as they tried to figure out who could give the speech. Finally, an insightful Cast Member walked up holding Mickey Mouse’s hand and led him to Roy. Roy stood up, took Mickey’s hand and walked out to give his speech. 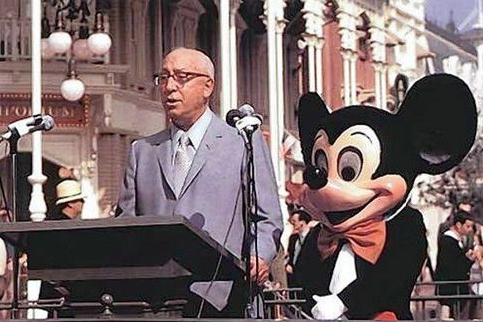 {i totally stole this pic off the Orlando Sentinel site…}

And as he gave his speech, he wanted everyone to know that this new theme park was not part of their family legacy. It wasn’t about his dad. Or him. It was about Walt. It was Walt’s dream, his baby, his love. So he changed the name then and there to WALT DISNEY WORLD. Not Disney World in the vein of Disneyland. But WALT Disney World so everyone would know it was Walt’s dream come true…

Walt Disney World is a tribute to the philosophy and life of Walter Elias Disney… and to the talents, the dedication, and the loyalty of the entire Disney organization that made Walt Disney’s dream come true. May Walt Disney World bring Joy and Inspiration and New Knowledge to all who come to this happy place… a Magic Kingdom where the young at heart of all ages can laugh and play and learn — together. ~Roy Disney October 25, 1971

But the really romantic part of the story is that Roy died just two months later. What an amazing story of devotion, loyalty and making others’ dreams come true! We all had tears in our eyes as he told the story!

We finally left the utilidors and walked through a vacant Magic Kingdom to our room (IN THE CASTLE!). But before we went to bed we had to put on our Cinderella’s Castle Suite ROBES and pose for a picture in front of the castle. WHO GETS TO DO THAT?!! 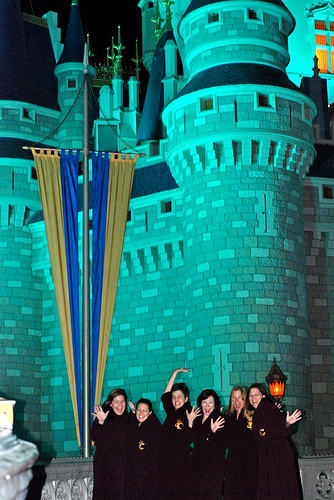 The next morning I got up first (well, after Amy who was doing #b90days in the foyer) and after I got dressed (in my new Cinderella shirt), I went outside to see the park all by myself. But I got out there about 5 minutes too late and the park had JUST opened. Anyway, there was a Photo Pass girl in front of the castle and we had a little impromptu photo shoot just for me! 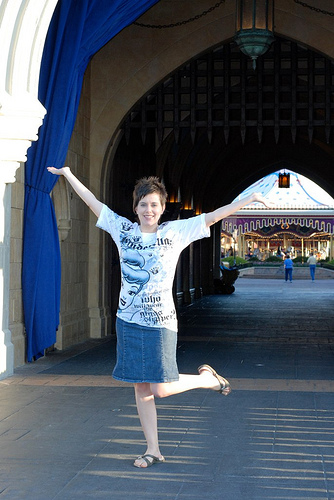 Then we were off to the races! Steve had of course retired after our all-nighter. But never fear, we had another amazing guide to hang on to–Michael! He took us to Cinderella’s Royal Table for breakfast where I had the most amazing stuffed french toast I’ve ever seen in my life…

are you kidding me?!

And this is where we realized we had been breathing Pixie Dust for a little too long. When you arrive at Cinderella’s Royal Table, the first thing you do is get your picture taken with Cinderella. Well, when we saw her, we were gushing about staying in her suite. We told her thank you and gave her hugs and cheek kisses. We thought she was really THE CINDERELLA. And that SHE really set up the suite for us. That she REALLY knew we had just come from HER HOUSE!

But it gets worse. When Snow White came to our table, we jumped to our feet (a table of SIX women with no kids at Disney World!) and told her we slept in the suite. She said (in her most wonderfully sweet and precious Snow White voice), “Oh, are you the b-loggers?” As if she was trying out a new word she’d never heard before! 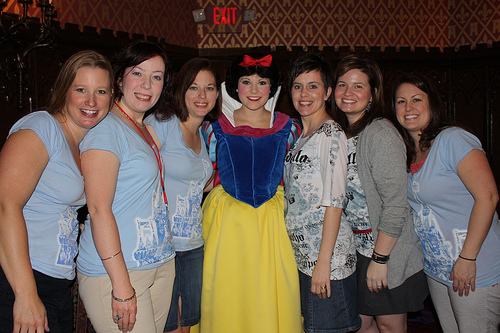 Snow White and the B-loggers

We laughed hysterically and then proceeded to make fools of ourselves explaining blogging and why we got to sleep in the Castle. And with each additional Princess (Belle, Jasmine and Ariel) we continued to talk, to explain our blogs and thank them for their hospitality–AS IF THEY WERE REALLY THE REAL PRINCESSES!

Amy explaining the internet to Belle

We knew we were crazy but we couldn’t help ourselves. The magic had fully penetrated our being. There were no kids to play act in front of. We were just six twiterpated women who were having Princess dreams come true. I’m pretty sure if they had offered us Princess dresses to wear the rest of the day we would have donned them in a nano-second! 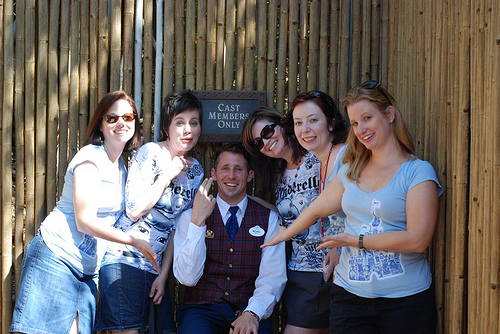 Finally, Michael drove us to our park of choice–The Animal Kingdom and got us set up on the Kilimanjaro Safari. After that we were on our own to enjoy the parks as peasants. It was tough coming down from the royal heights, I have to admit.

The coolest part about talking to Michael, Steve and our other Castle Cast Members is that they kept saying, “WE”. Even if it was in reference to something that took place before they were born…”When we built Magic Kingdom” or “when WE started Epcot”. I asked them about it and they said it’s just part of their vocabulary–not because they were trained to say it but because they really feel that they are part of a big family. A group of people who are making dreams come true. For families, kids and even b-loggers! 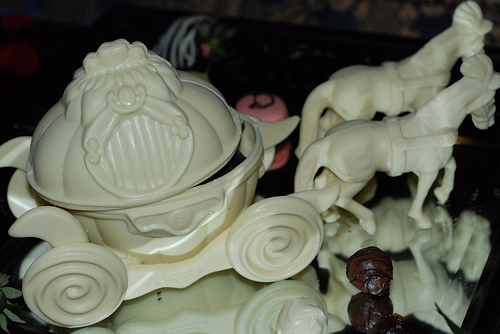 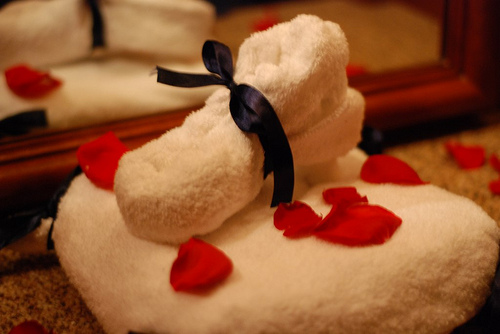 Glass Slipper Towel in our bathroom 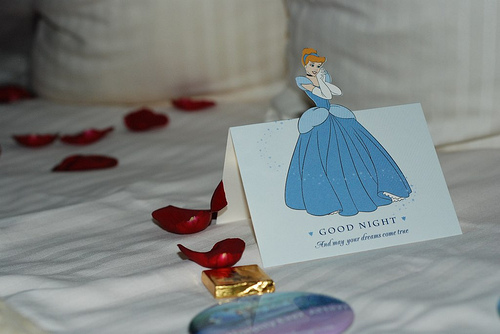 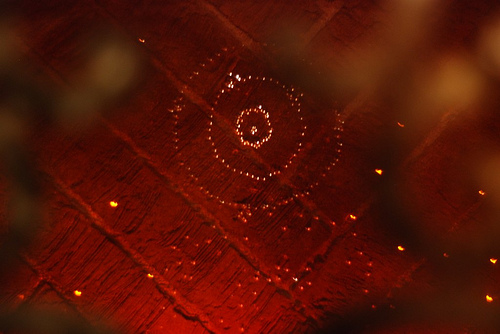 This is hard to see–the inside of the fireplace had fireworks–one was a hidden Mickey! 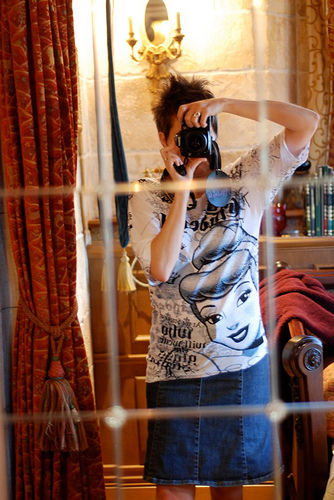 Mirror, Mirror on the Wall…

And one final picture of me… 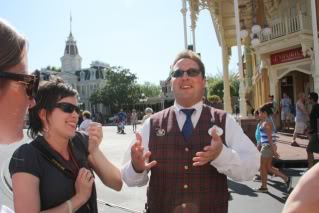 This whole experience has secured my dream of being a VIP Tour Guide at Disney when I retire. One day it will be ME leading crazy groups of people through the parks! Only I’ll look like Tour Guide Barbie. Ahem.

Most pictures by me. Some by Crystal and Amy. Don’t steal ’em regardless, ok?

I am not a Disney employee.  The postings on this site are my own and do not necessarily represent Disney’s positions or opinions