{in case you missed Day 1, you better catch up first!}

I woke up bright and early in my cozy bed at the Grand Floridian. After trying on about 4 outfits (I never know what to pack when I’m going somewhere with different weather) I headed out to Citrico’s for breakfast. I love walking around resorts by myself–especially early in the morning. So, I was enjoying my short walk when suddenly I saw this: 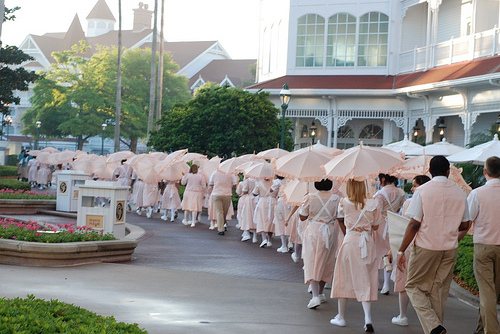 The entire housekeeping staff complete with parasols doing a mini-parade through the resort! I literally snapped about 50 pictures of them because it was just so adorable! This is what I love about Disney--there is absolutely NO reason for them to do this. It just adds to the story of the Grand Floridian and I think it adds to the magic of the housekeepers’ job–that even a little parade could be a once-in-a-lifetime memory for a guest. It certainly was for me!

The breakfast as Citrico’s was superb–I of course didn’t take a picture of it at all because I was…well, eating. But I did get to sit with my friend Sarah and meet Jodi and talk about…hmmm…I don’t think we talked about blogging. Anywhoo. It was fun. And apparently so much like real breakfast with friends I didn’t even snap a picture!

After breakfast we headed down to our conference room where I met up with Kathy, Jen and Stephanie! We sat smack dab in the middle of the room (which included a castle for the backdrop AND a castle as our centerpiece). We got our computers set up for massive tweeting and then when it began who walked out to host the day? My in real life, good friend, Carol! 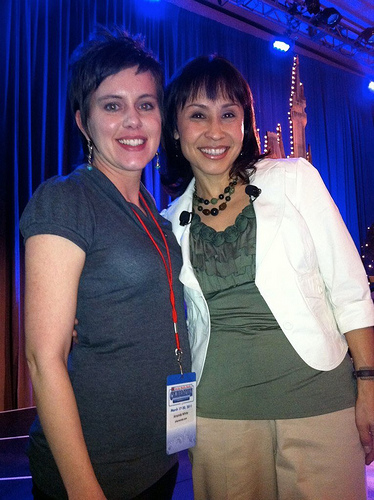 When my husband and I helped start the church in Florida, Carol and her family moved there about halfway through. When we left, they continued on and Carol became uber famous at Disney. She’s an American Idol Experience judge and even had a part in the movie Letters to God. Plus, she’s the most adorable person on the planet. It almost made me cry seeing her. We went through a lot of STUFF at that church and even though it’s been years since we lived in the same town, those months of serving together and loving each other made for a real and permanent relationship. It made the day that much more fun to see her on stage!

Now it was time for the real deal–we heard from so many outstanding people this day. Really, it was non-stop. (And might I mention, always on time? And totally lacking dead air? And always totally professional?) Let’s see…first we heard from Meg Crofton, the President of the Walt Disney World Resort. She is lovely. But since I had already met her AND had my picture taken with her at my Moms Panel training, it was old hat to see her. (You sense the sarcasm and name dropping, yes?)

Next up was Matt Jacobsen. What? You’ve never heard of him? Well, he’s only the 8th guy to be hired at FACEBOOK. Seriously. That means he was like in the movie. Well, he didn’t say that but he had to be right? One of those guys jumping off the roof into the pool?

He basically gave us a good explanation of facebook…there’s just something about hearing someone explain something they are passionate about. Then he answered questions for us and I think we were asking some good ones. He finally said, “The stuff you guys are asking is stuff no one else does or even thinks about!” See? Mommy Bloggers are on the cutting edge! Rawr! 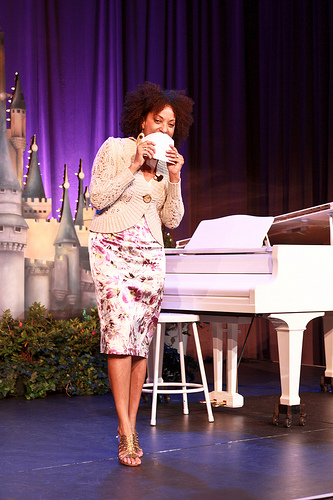 Next up was Rene Syler. This woman is a dynamo. She worked on the Early Show for awhile, had a preventative masectomy, wrote a book called Good-Enough Mother

And in all that she was as normal and real as any mom I know. And she was inspiring. Everyone was taken by her–we even got her name trending on twitter! Her whole goal is to help moms take the load off–by giving them permission to not be perfect. I just loved her whole outlook–that being a mom is SO important, but freaking out about it is not. It’s OK to take yourself off the bottom of the TO DO list and start paying attention to the whole self, the whole family, etc.  She was just great. MORE than “good enough”!

Right after the standing ovation for Rene, my friend Carol came out to give some prizes…a Mickey Mouse Dooney & Bourke purse, a Disney watch and a Disney Junior gift basket. But then. THEN. The Fairy Godmother herself came out to help giveaway a prize. But not just any prize–a NIGHT in Cinderella’s Castle! Some of the 2009 Disney Moms got this opportunity and it is once-in-a-lifetime. Is it possible I could win, too? I mean, Carol is up there! She could pick my number! We could hug and it would be magical, right?

My number wasn’t even close. But guess who won? My friend (and sponsor of ohAmanda) Andrea from Savings Lifestyle! She jumped up and down (like a bunny) and screamed and yelled and danced to the front of the stage to claim her ticket! She was going to sleep in Cinderella’s Castle! And as a mom to 3 boys, this was a magical, girly, princessy dream come true!

I was highly jealous and tweeted so. A few minutes later Andrea stops by my chair and says, “Did you get my direct message?” And I said, “No.” (trying not to hope it said what I hoped it said!) She said, “Wanna be a princess tonight? I can invite 5 friends to go with me to the Castle.”

ARE YOU KIDDING ME?!

Andrea invited me! Out of all her blogging buds and famous friends, she picked me! So, of course I said yes! Poor Les was gonna have to rough it alone at the Grand Floridian but I was sleeping in Cinderella’s Castle!

I still get excited just saying that!

We had to get our luggage together by 4:00 to be escorted by our private car and driver to the castle! EEEEEEEEKKK!

Let’s get back to the real world for a second…we broke for lunch. I sat with Kathy and my new bestie Sami Cone. Then ran to the room to kiss Les and pack my bag. Les went to lunch with another of our church-planting friends while I went back to the conference.

Next up was Chris Brogan. I was the most excited to hear him because he’s a real and true social media guy. He had lots to say—mostly about crap and God-lovers. But whatevs. I liked him because of his focus. He said, “I don’t want an audience. I want a community.” That’s such a good way to look at blogging. If you’re in it to have an audience and be famous–well, good luck with that. But a community? That’s where the real fulfillment comes. I want a community. 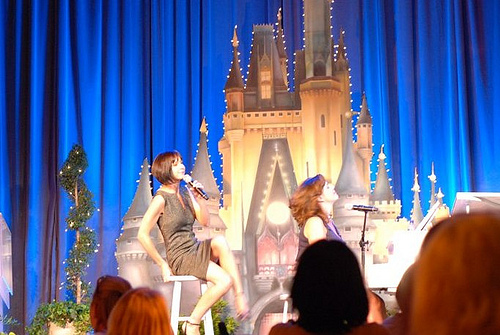 Then two ladies came to the stage–one at a piano and one on a stool. And they began to sing. And at first I thought, “Ho-hum. I don’t really want to listen to any singers. I mean, I *am* spending the night in Cindrella’s Castle! I don’t have time for this!” But the more they sang and the more they talk the more I fell in love with them! Susan Egan and Georgia Stitt are famous and fabulous performers–but also mothers. Susan was the voice of Meg in Hercules so she sang Meg’s song complete with animation. She was also the original Belle on Broadway’s Beauty and the Beast. So, she sang a gorgeous medley of Belle’s songs. I cried. It was lovely. I honestly felt like we were friends when it was over–they were so open and real about juggling motherhood and work. LOVED.

Finally! Finally! It’s time! Time to get to Cinderella’s Castle! But wait…I think the castle needs its own post, don’t you? Let’s skip ahead to dinner–we had to leave the lofty heights of the Castle and mingle with the peasants rest once again at our amazing private dinner at Hollywood Studios!

It was located at the Lights Motors & Action! attraction in Hollywood Studios. But the host? Disney Junior! And this was the first real time I felt bad for not bringing the kids with me. Lydia would have thought the party was just for her. There was a DJ, costume characters and lots of yummy food. As usual. {The best food was the chocolate covered Rice Krispies Mickey heads. I stole 3 off the kids’ table for me and Andrea!} 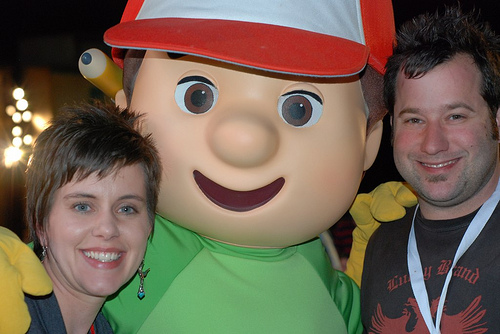 We had to get a pic with Asa’s favorite! 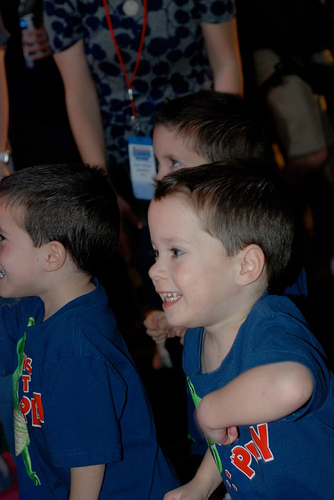 Dancing with 3 of Jen‘s quads! 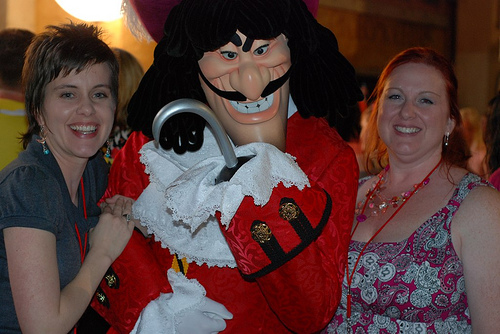 Suzannah and I are like kids hunting down all the characters for a photo! 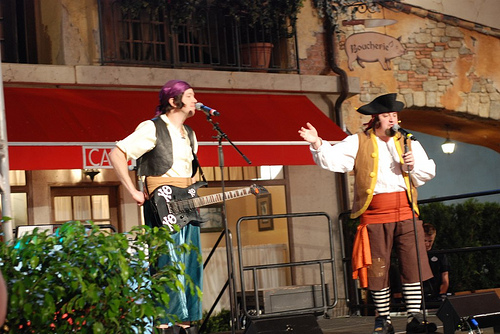 Sharkey & Bones from the Neverland Pirate Band! Did you know they are a real band from Portland? A pirate rock band?! 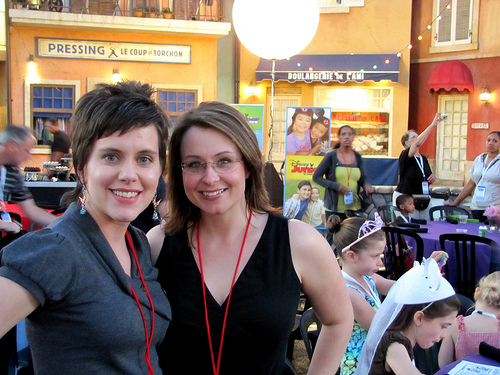 One of my favorite friends, Sarah from Real Life Blog! 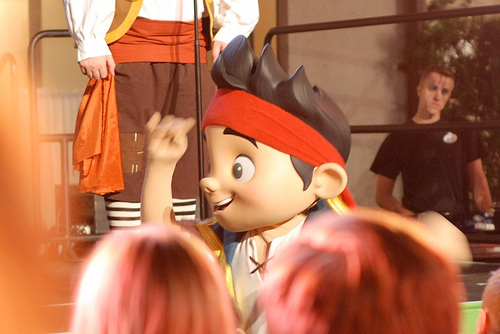 And look! Even Jake from the Neverland Pirates was there! I think it may have been his debut!

And now! FINALLY! It is time for our night in Cinderella’s Castle!