You are here: Home / party / It’s a Small World After All

I really wanted Lydia’s Small World party to be a colorful, whimsical world like Mary Blair created. I imagined big murals and balloons and fun cut-outs and streamers. Alas, my dreams are always bigger than my abilities and we went for the whole flags-around-the-world-and-do-kids-really-look-at-decorations feel. <insert sheepish grin>

When the kids arrived they passed my favorite part of the decor, our front table complete with giant map, vintage Small World album, ornaments and some knick-knacks from around the world. We still have this up because I kinda love it. 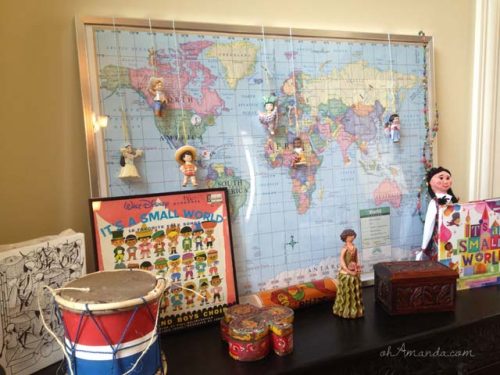 Then, they signed Lydia’s book and were ready for their passports. I scoured (and I do mean, scoured) the internet for a cool printable passport. We ended up using this one but can I tell you it’s probably not a good idea as it used “surname” and “given name” and the kids thought this was SCHOOL and not of them could do it alone. Sheesh. 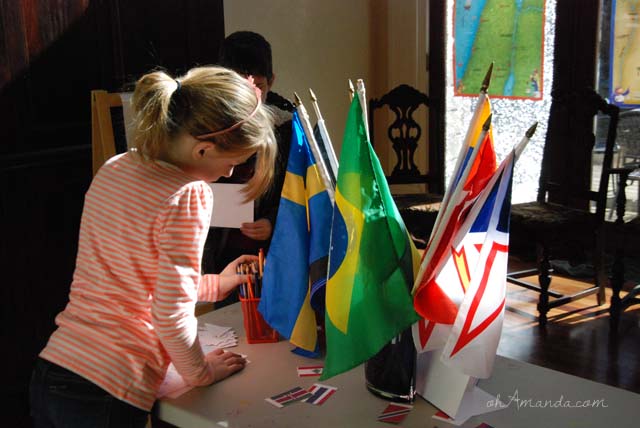 After they received their passport, they made their way to Mexico to make a maraca. It’s a basic craft (it’s actually in my Sense of the Resurrection book!) with easy supplies–plastic spoons, a plastic Easter egg, beans and my favorite, DUCT TAPE. 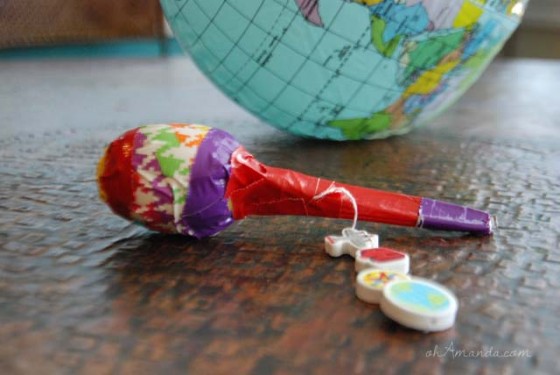 Just fill the egg with beans, place it between two spoons and tape it up! We also added some foam beads  leftover from Asa’s Flying Ace party because they were travel-appropriate. 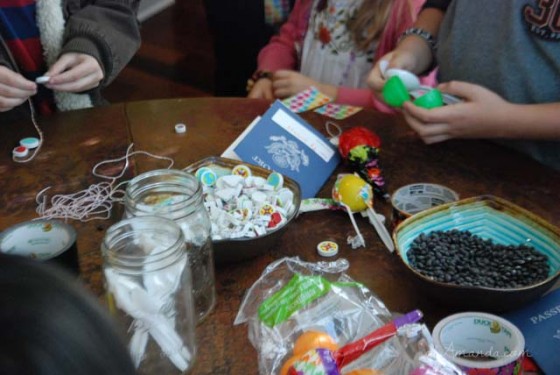 After a little maraca action, it was time for the big-time travel. We gathered at the…uhm…(trying to think of a good travel word)…uh, front door and I divided them all into groups of four and then sent them off to a far away country! These countries were really just sections of our house with small stations set up (similar to Lydia’s Winter Fairy Party). 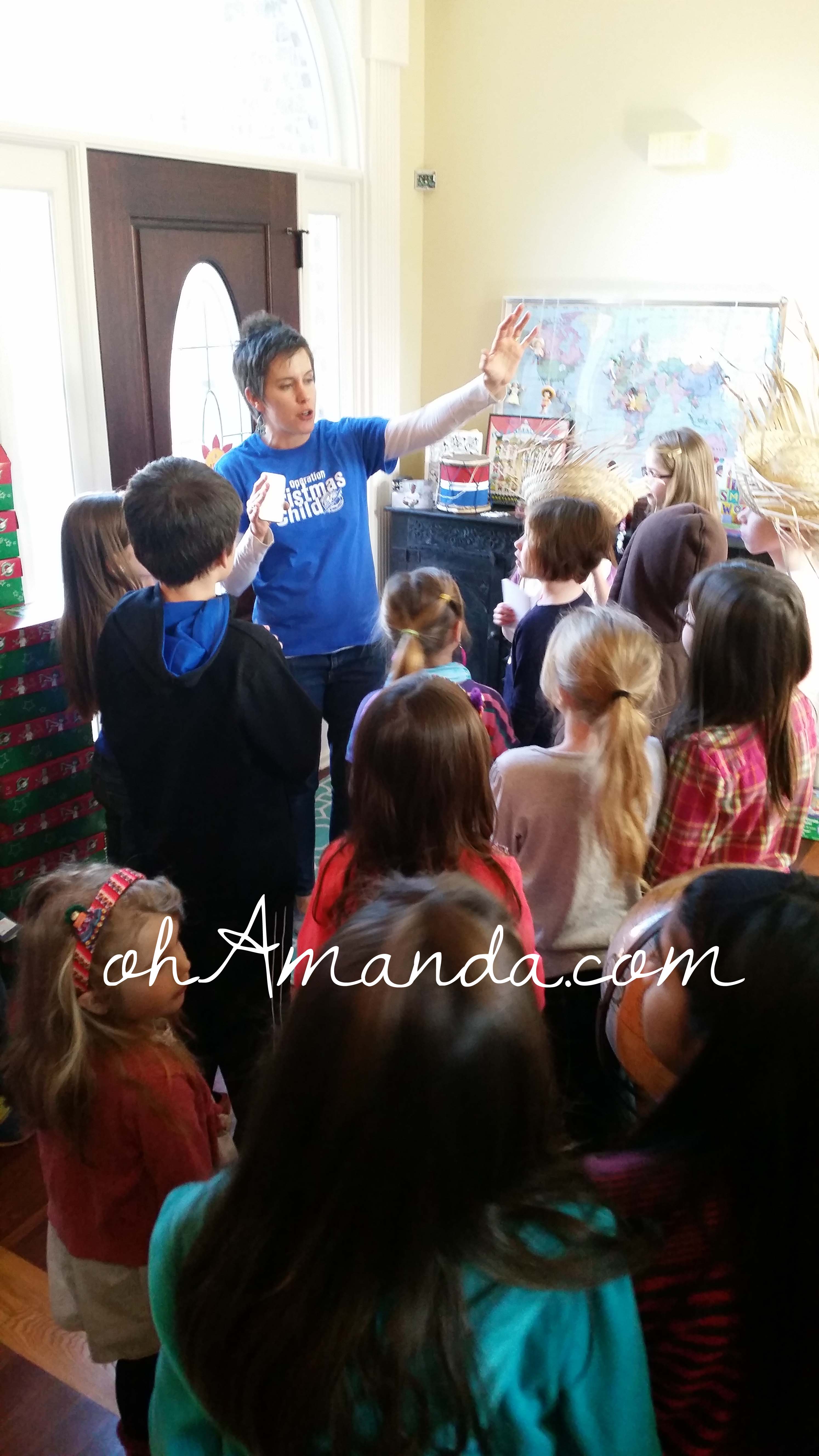 I was so hoping that each of these country games would be authentic games or activities kids play on their birthdays. Alas, the library did not give us a lot of interesting help in this area, so we improvised!

In Hong Kong, I gathered some authentic Chinese take-out containers, chopsticks and puffballs. (Y’all, we love puffballs around here!) The kids played a few relay games (hopping, over-under, etc.) to fill up their container with puffballs only using the chopsticks. 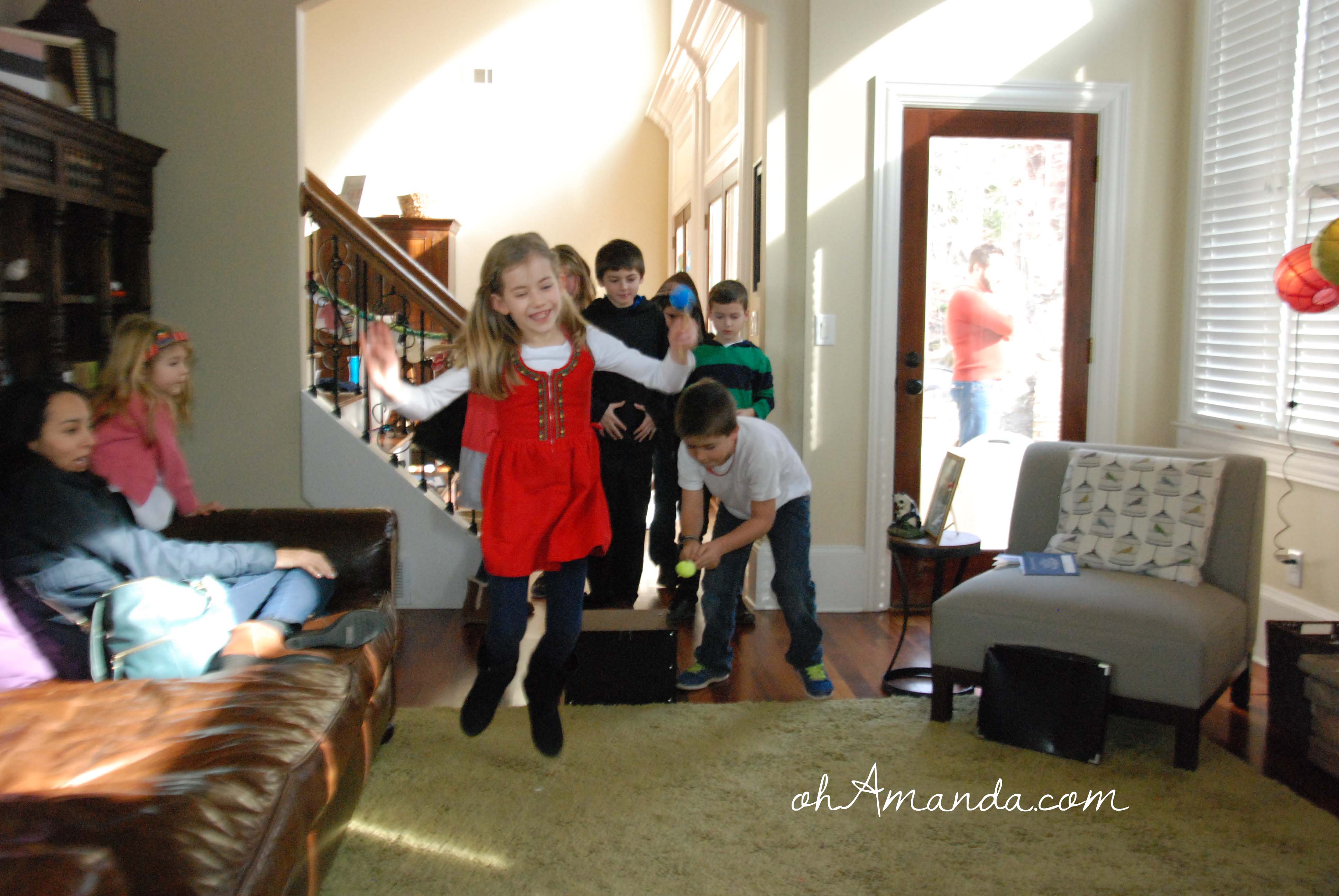 It doesn’t sound very fun but can I tell you that the kids thought it was amazing. We played for 5 minutes (as timed by my phone) and then I sounded the alarm (I wanted a train whistle but used my voice instead) for all the kids to rotate to the next stop.

But before they left, they got their own stamp in their passport. (Which was really a sticker I made. You can download them by clicking the graphic below and then print off on full sticker paper. It’s got Lydia’s birthday date on it, but really, who’s gonna pay attention to that?) 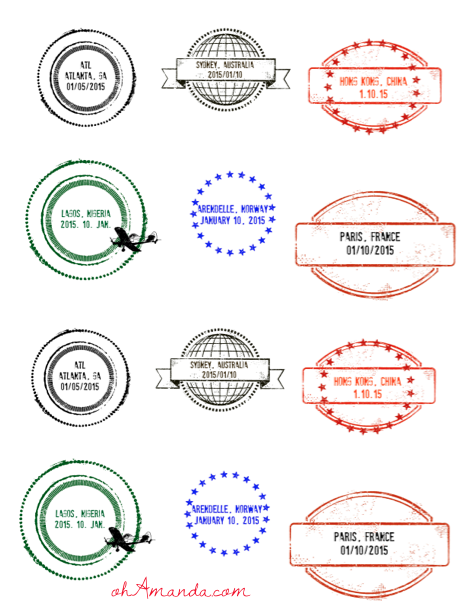 OK, our next country was Lagos, Nigeria! I chose Lagos because it’s supposed to be where Anna Hibiscus lives. We actually did find a Nigerian tradition where kids play pass-the-gift in a circle and when the music stops, they begin to unwrap it.

However, the package has been wrapped several times so they can’t get to the gift right away. Once the music begins again, they have to pass the gift on, no matter what stage of unwrap it’s in! Finally, when it’s unwrapped they receive the gift. We put jungle animal hats inside and every kid got a prize! 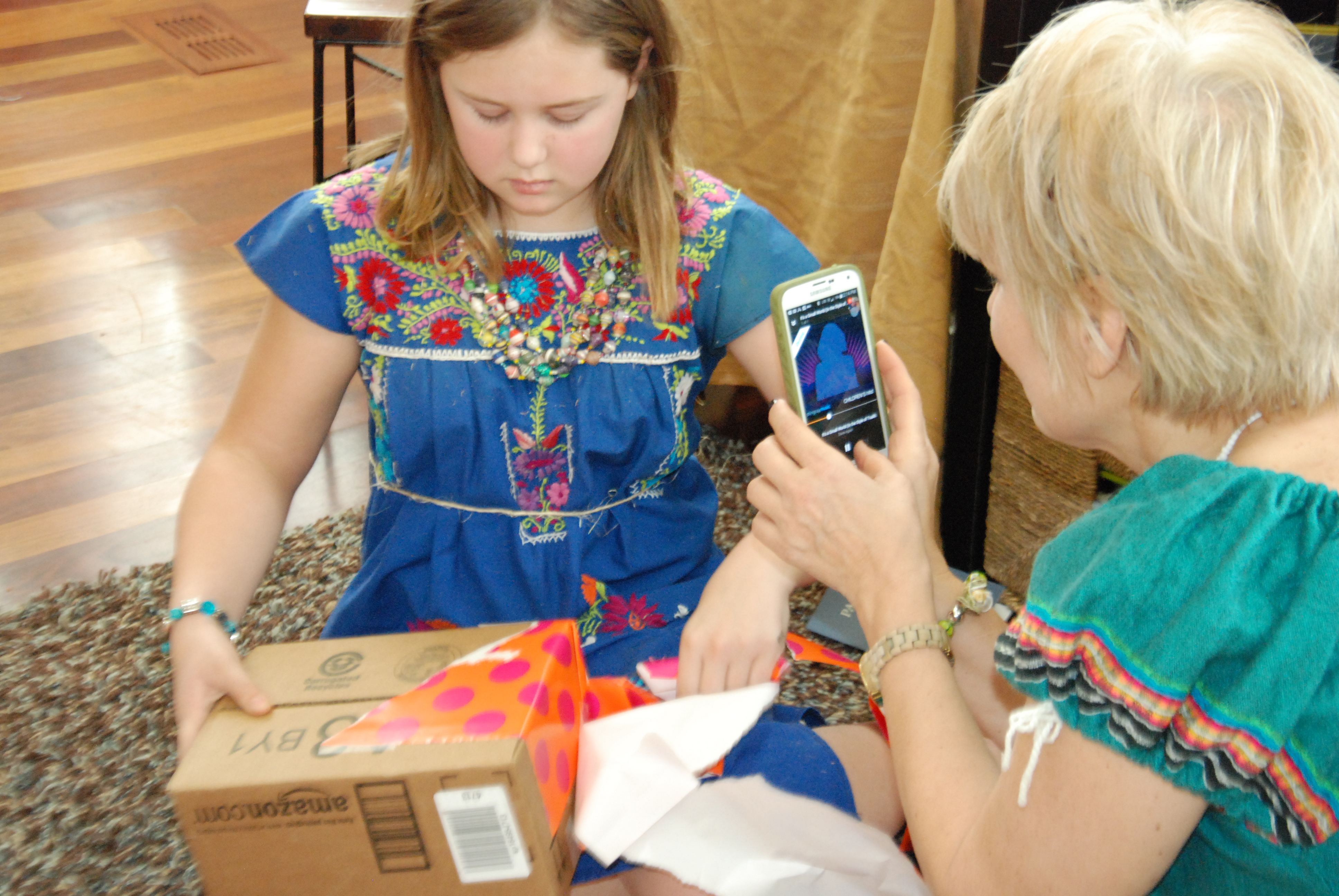 Lydia was adamant that Paris, France be one of our countries. She loooooves Paris! So, we had the kids build an Eiffel Tower out of cups! This is one of those games where you just have to wing it based on who is playing.

You can either say, “Hey, kids, let’s all build this together!” and everyone joins in and likes it. Or you may have everyone make their own smaller tower, or have a race and see who can build it the fastest, or tell them they are competing against the other teams and make it the tallest. Thankfully, my BFF, Staci ran this game and knew what to do! 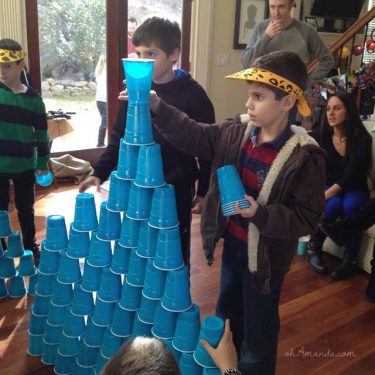 Apparently, the boys were the best at this!

Our only outdoor station was the arctic tundra of…Australia! I borrowed some burlap bags from my mom (she has EVERYTHING) and we did a little kangaroo race. 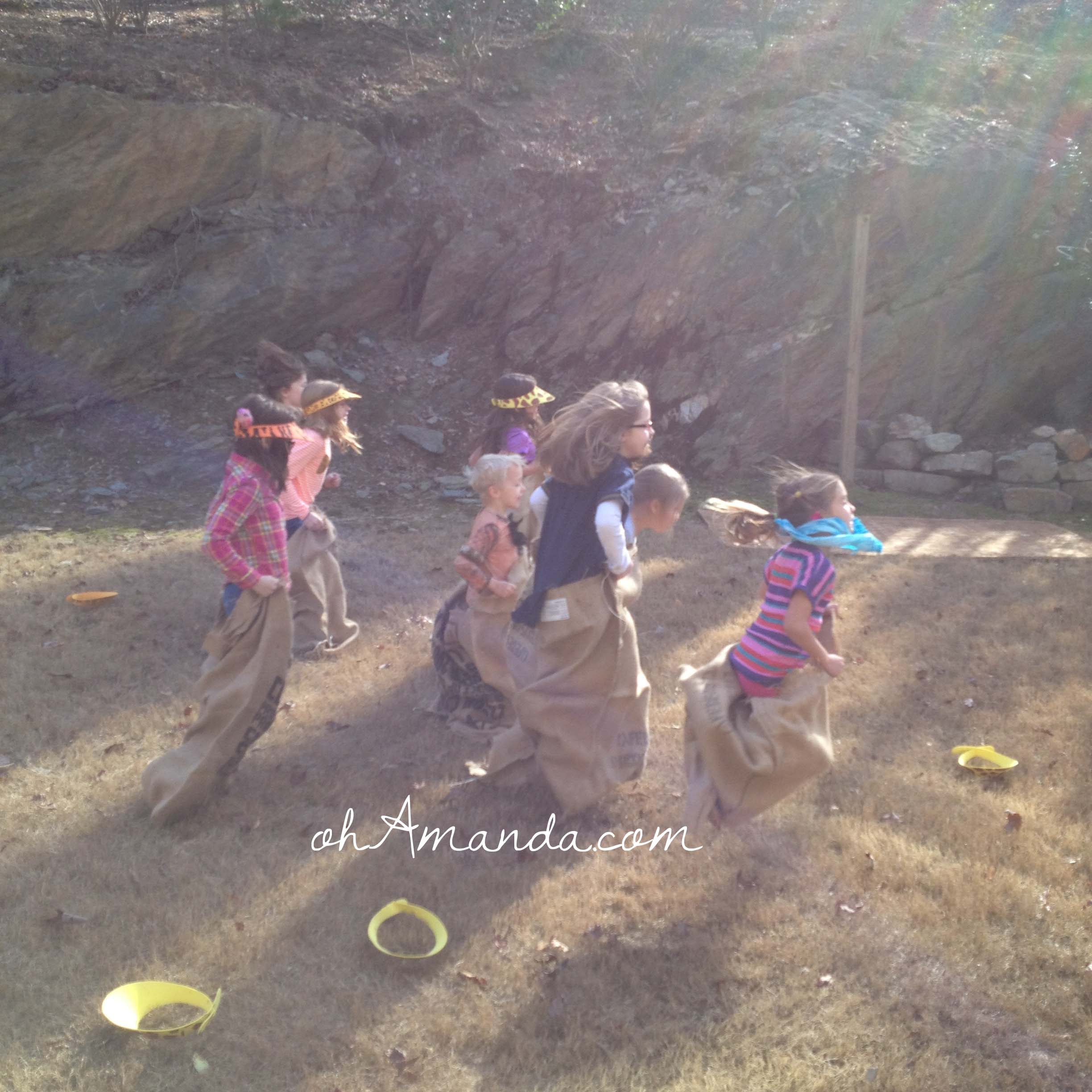 My girl loved it… 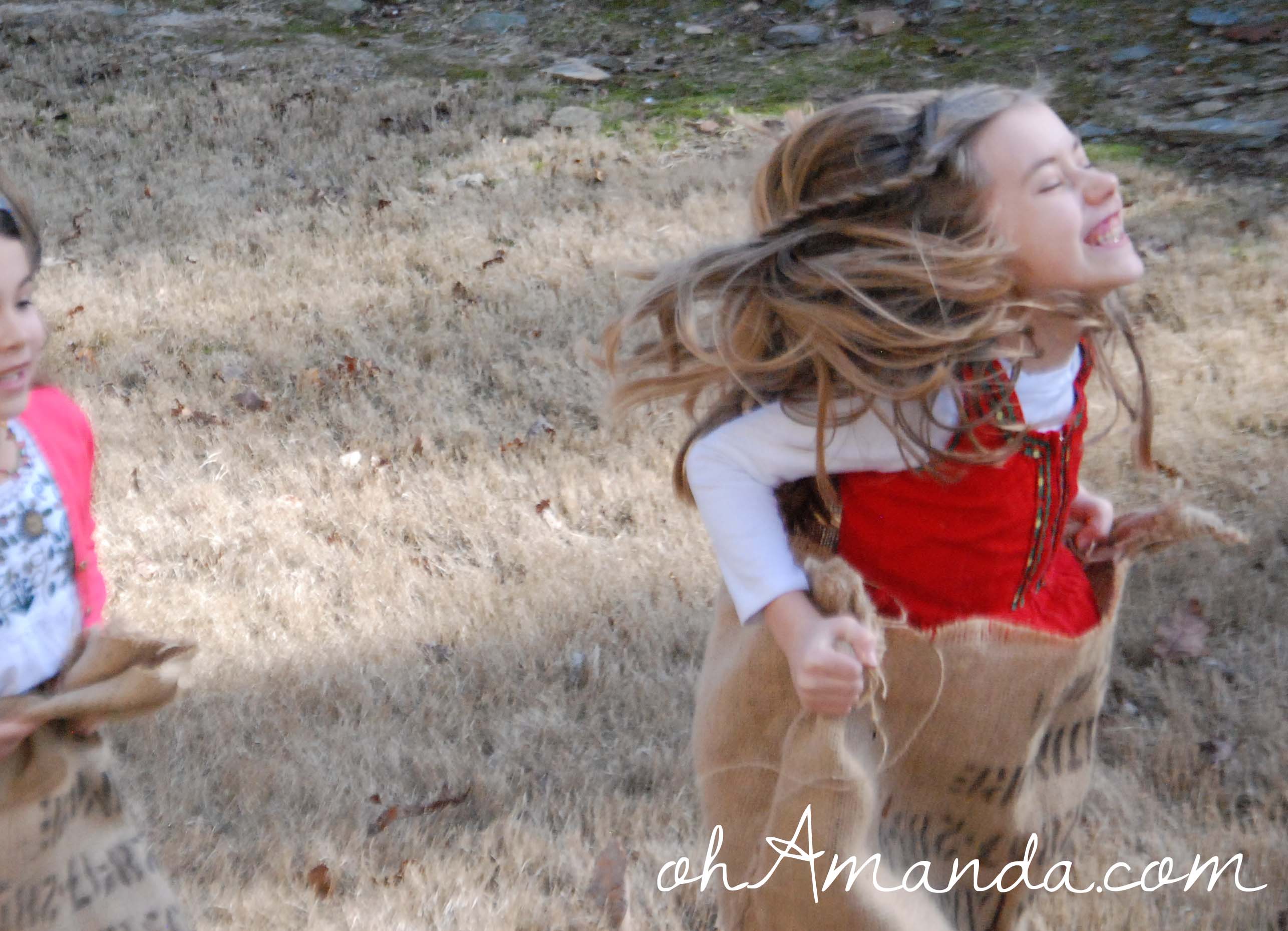 Our final country was Norway where kids will fish off their balconies for ice cream on their birthday! How fun, right? Instead of ice cream, we fished for giant puzzle pieces which the kids then put together to form this fun around-the-world picture. 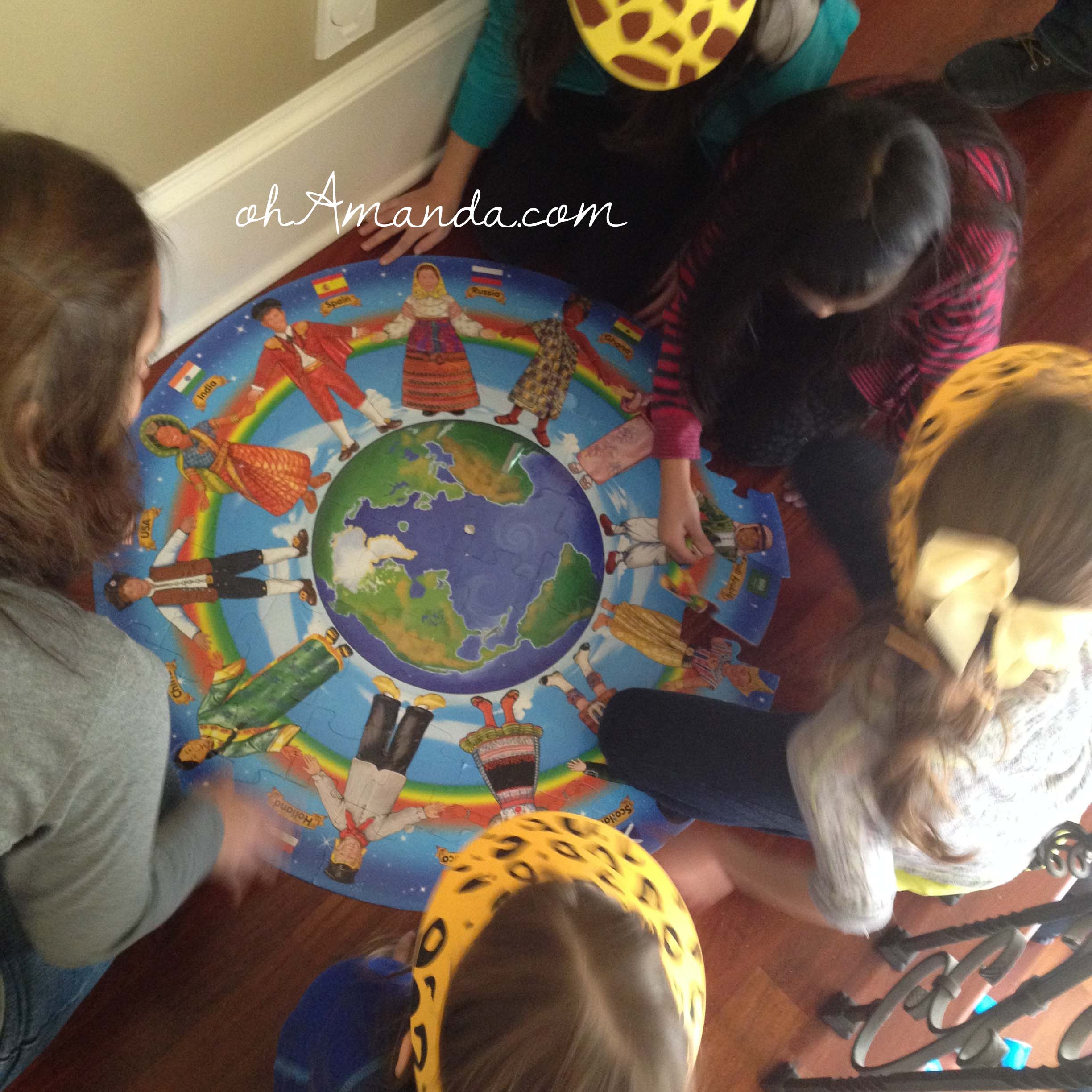 My brother manned this station and had all the kids singing Frozen songs as they fished. They loved it! (He’s dressed as a Canadian. Heh.) 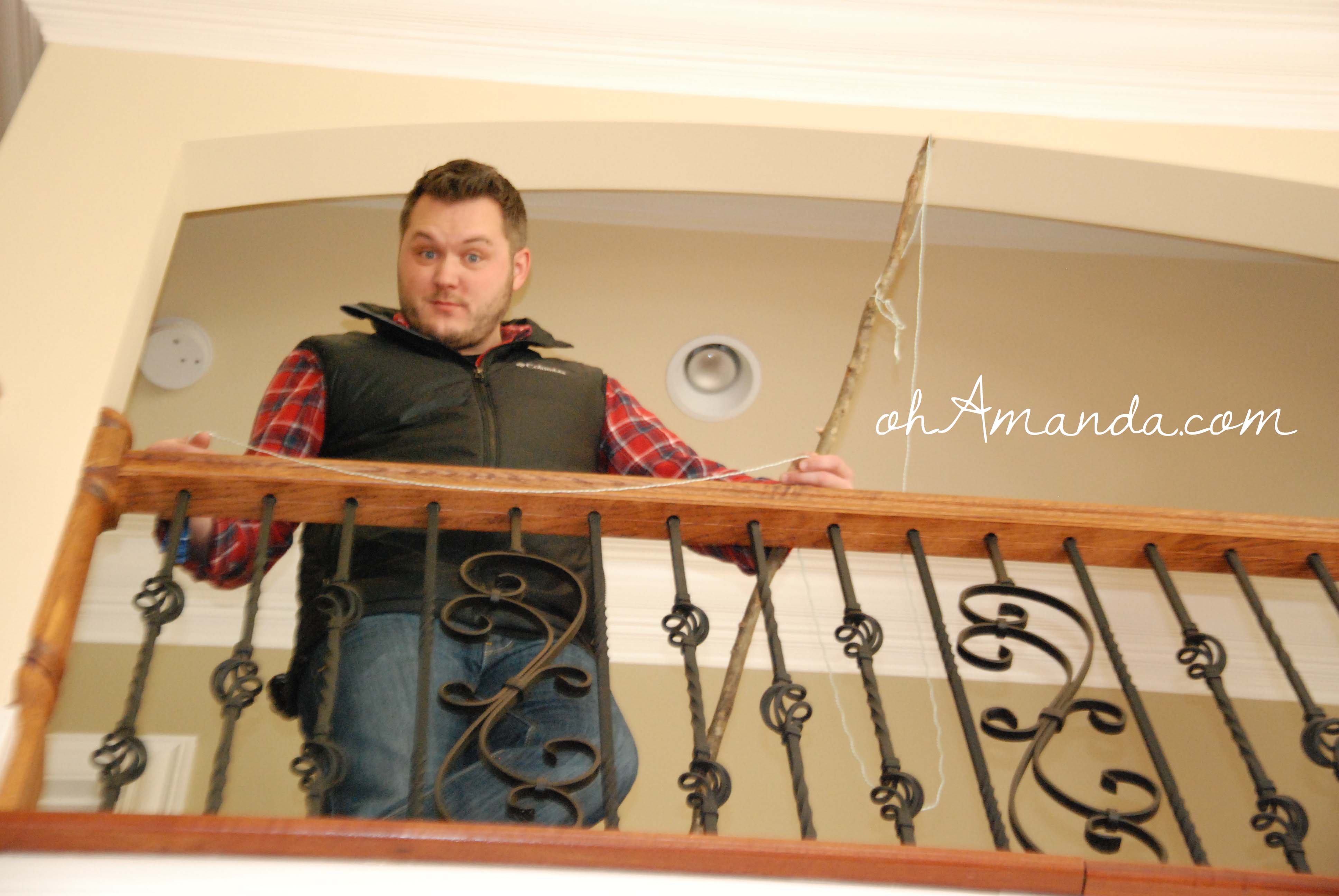 The final part of all this is that Lydia and I made these AWESOME signs for each station. I printed off pictures of local geography or people, pictures of the flag, etc. and then we made a little display with other items to match the decor. And somehow we got NOT ONE PICTURE OF THESE. This is one half-done display so you can see the idea…but they all turned out so much cuter than we had planned! (Our Norway sign had a picture of Arendelle and some Anna and Elsa Itty Bittys!) 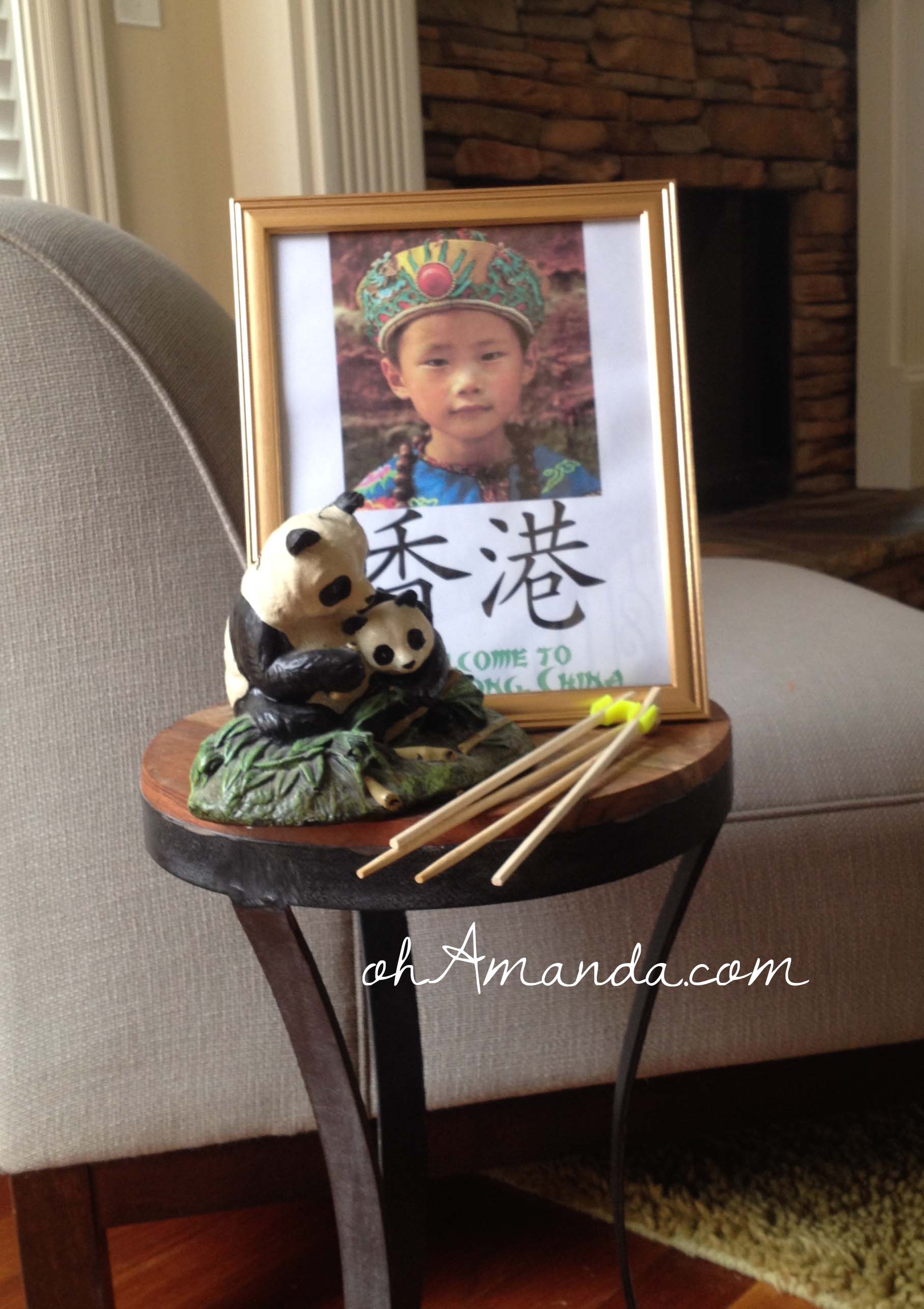 Whew! Are you jet-lagged yet? I am! Click over here to see all the fun food, goody bags and not-unwrapping-presents from the rest of the day! Look at the widget below for more links to some of the fun stuff we used at the party! 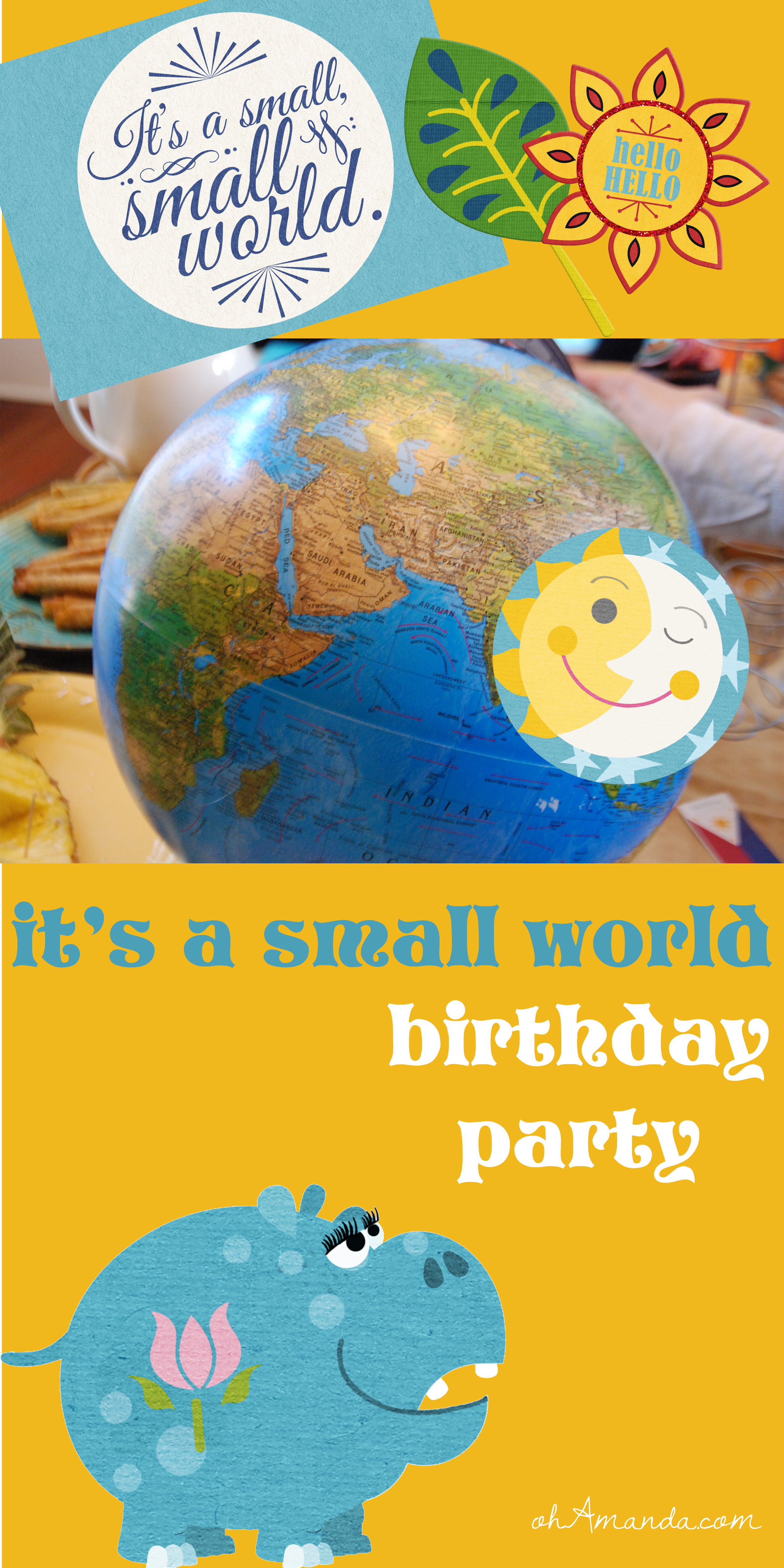