You are here: Home / party / The Flying Ace Party 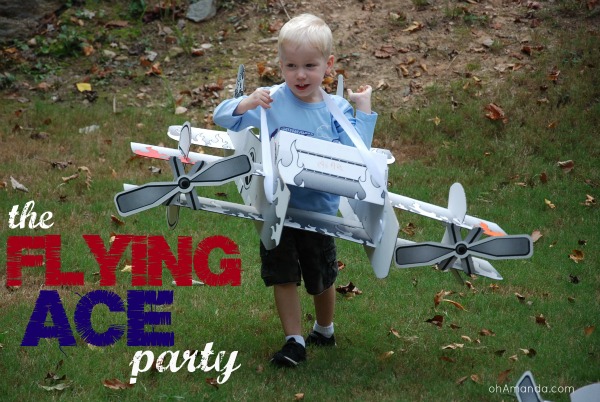 The Flying Ace party is finally here! I feel like I’ve been teasing you for weeks about this. (Geez, I hope I can live up to my own hype!)

We’ve been calling Asa, “Ace” since he was little (hence, the Vintage Ace party when he turned one). I decided a Flying Ace party would be another perfect pun for a birthday. 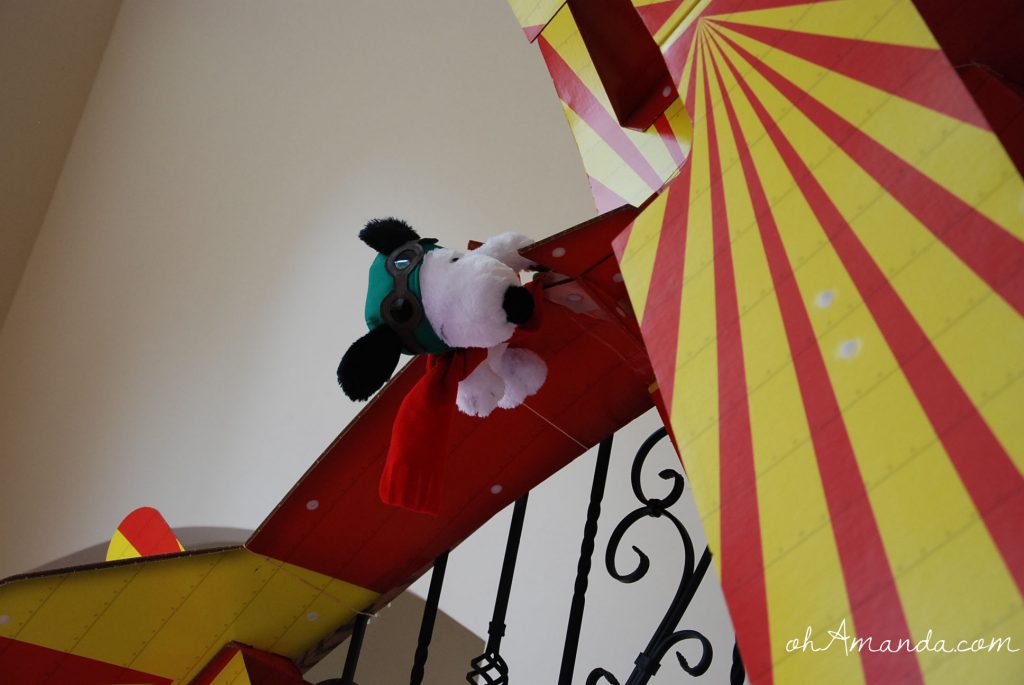 Plus, we could pull in Snoopy, the Flying Ace and his red doghouse. It’s a perfect little boy party! (Why, yes, that is a giant red and yellow plane flown by Snoopy on my stairwell.) 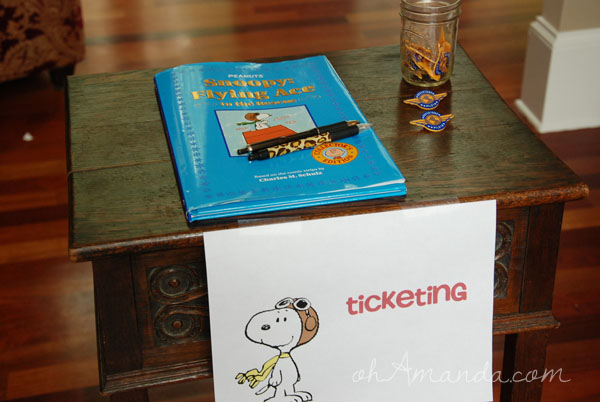 First, we set up a Ticketing booth. Well, not so much a booth as a piece of furniture with a sign taped to it. Anywhoo, I set up Snoopy’s Flying Ace book (<–can’t find a link for it on Amazon. It was a thrift store find.) for everyone to sign as they entered. Plus, some pilot wings for the kids. 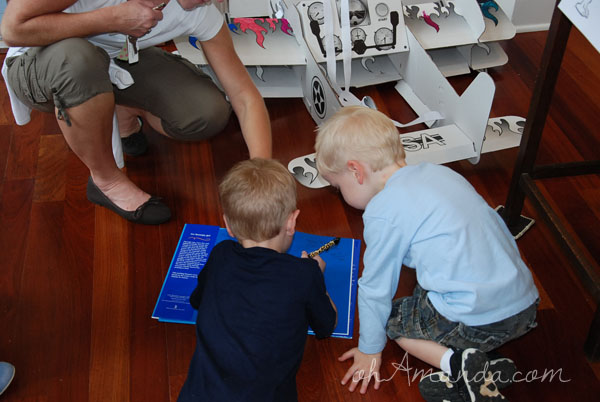 I always have guests sign a book at each birthday party. It’s a fun memory and one I hope the kids cherish in the years to come. Plus, it’s cute to see little kid handwriting inside the book. 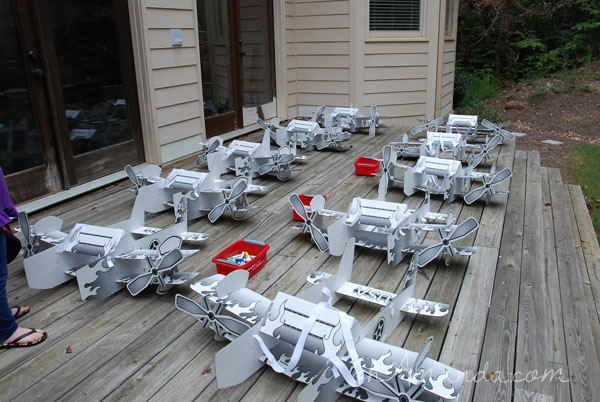 I know I’ve already showed you our airplane costumes from Wearables. But, how cool do they look all lined up on the porch?! Like an runway, huh? I don’t think I could love it more.

These airplanes came in a box completely UN-put-together. I opened them up and said, “What have I gotten myself into?” They were actually really easy to put together. They are also surprisingly sturdy. My awesome husband stayed up late the night before to put all of them together. He said he got so good at them he was doing them in less than ten minutes each! 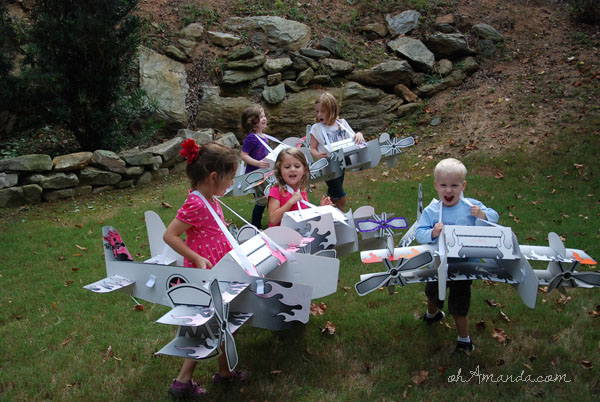 When the kids walked out onto the porch, they were kind of starry-eyed like, “What is all this awesomeness?”. Then they sat right down and colored for at least 45 minutes. FOURTY-FIVE MINUTES!! No one even ate when the party first started (well, I did, of course) because no one would budge from their planes!

These airplanes were the absolute hit of the party. The kids loooved coloring them and then flying around in them. The rest of the activities and crafts were just an afterthought after the coolness of the Wearables planes! 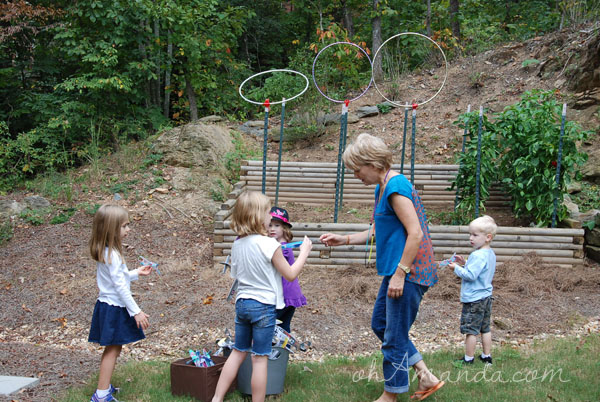 We bought some cheap airplane gliders from Amazon. I duct-taped some hula hoops to the stakes in our garden. The kids tried to throw their airplanes through the hoops–and although I don’t think one of them (or even one of the adults) made it, it was cute and who doesn’t like throwing an airplane around? 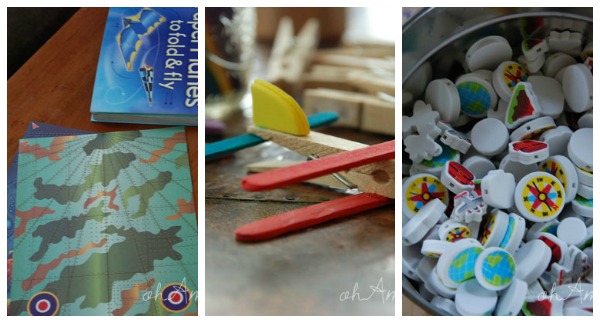 For crafts, I got the coolest book from Usborne with awesome paper airplane paper & instructions. I want to make all the airplanes myself. It is super cool. We also made clothespin airplanes with colored clothespins and leftover pieces of craft foam. We even made travel bracelets with these cute foam beads I got from Oriental Trading—the Group VBS this year was an airplane theme and every year Oriental Trading does their own version of crafts and prizes based on that theme. So, I got these VBS-spin-off beads for 50% off. Score! 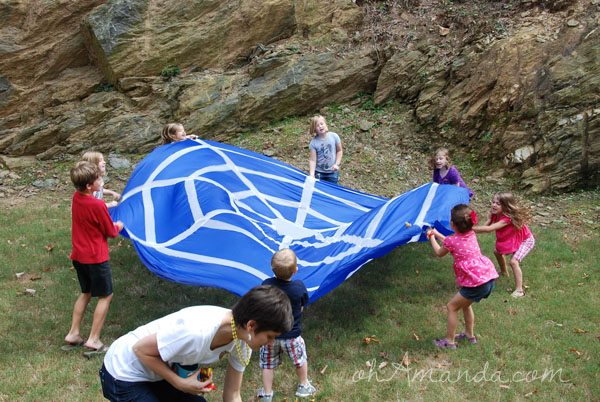 Then, there was the parachute. Oh, man. Parachutes are so fun. Even when you don’t really know all the games, you just make the kids shake it up and down and run in and out and you’re famous. It was super fun. My mom had a parachute for her summer camp, so we borrowed that. (Thank goodness because they are like $40!)

And now, for my favorite part. THE FOOD! 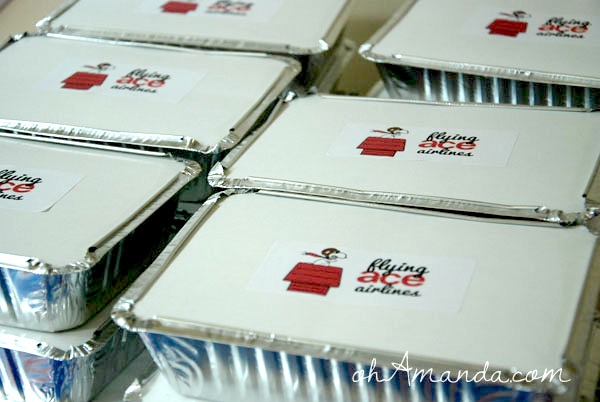 From the very beginning, I wanted to do airplane food. Like in a box. So, I found these tin boxes at the Dollar Tree, three for a dollar. Then I printed off a cute picture of Snoopy and slapped those on top. Inside was a resealable bag of pretzels, peanuts, one Biscoff cookie and three pinwheel sandwiches. Let’s all stop and recognize how clever that is. 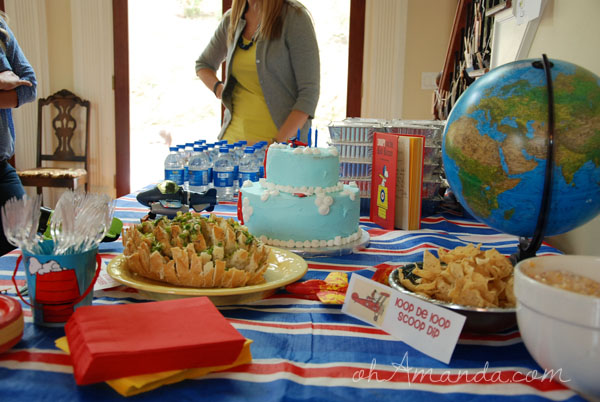 Because I knew that food isn’t the most delicious thing on the planet, I added my own favorite foods on the table: The Bloomin’ Onion Bread and The Magically Delicious Corn Dip from Vanderbilt Wife.

And isn’t the table cute? I got the tablecloth at the Dollar Tree,  grabbed the globe from the play/school room and found that cute Snoopy bucket at the Target Dollar Stop. Also, do you like the sign for the Magically Delicious Dip? Loop de Loop Scoop Dip. *shrugs* I thought it was creative.

Now, the cake. Isn’t it lovely? Staci always does the kids’ cakes. And she always makes something beautiful! Thank you, Stace for loving my kids!

And how ’bout this cake picture? We should be on a commercial, huh? (Oh, and did you see my shirt? And Lydia’s? Cuteness.) 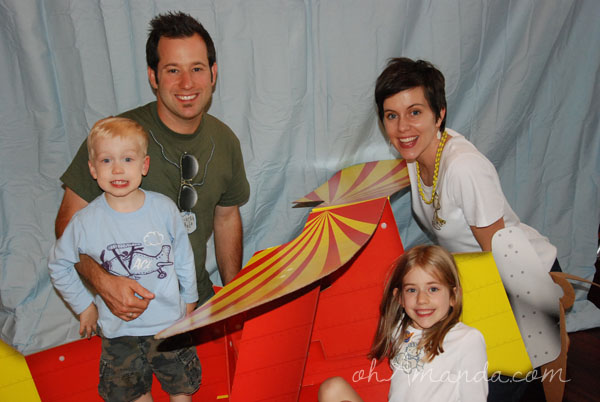 We also had a photo opp set up. That red and yellow thing is a plane (also from an old VBS) but it didn’t quite stand up like we’d hoped. I wish you could see the Sisterchick picture we took–but it’s on my Sony Handycam and I still can’t figure out how to get those pictures off onto my Mac. Anywhoo. We had a hairdryer next to the plane so you could make your hair fly back. It was pretty awesome.

(Oh, and my husband’s shirt? And Asa’s? I couldn’t have planned those better myself!) 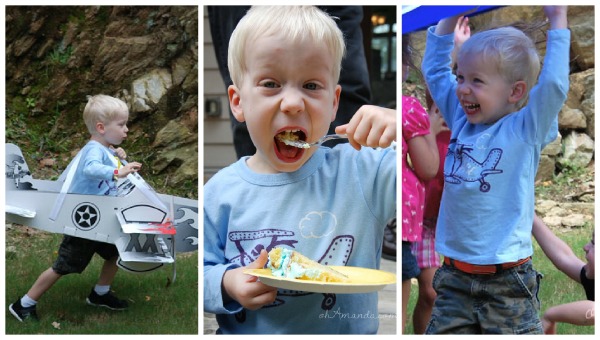 My Flying Ace had such a fun time. He was into everything and laughed and played with everyone. I can’t believe he’s 4. Too big. But at the same time, the best age ever.

I didn’t know the Flying Ace party would be such a big deal to me personally, but since the party and having the blog relaunched and redesigned, it’s been cool to see the airplane motif show up. It’s a reminder to help my son and my daughter soar into life. A gentle reminder that my goal as a mom is to let my kids go one day. I’m so glad I get to grow with them and they can stretch their wings at age-appropriate levels.

So. There it is. The Flying Ace party. How did you like it?

Thanks again to Wearables from KC Constructions for providing the costumes for my guests! Check out their fun costumes—perfect for a crafty Halloween! (Just look at this Princess Carriage!)

Have you downloaded my new ebook, Praying God’s Word for Your Kids? Subscribe to get it for free!

❮ ❮ Have You Made The Switch?
Free Printable Scripture Art ❯ ❯