You are here: Home / books / The Circle Maker for Kids {& a crafty craft!}

You know I like to read a book with my kids and then do a craft to help them reinforce the lesson of the story. Well, I got the new The Circle Maker for Kids by Mark Batterson this week and it totally inspired me to make a craft–only this time the craft was for me.

I have written about Batterson’s books (and even interviewed him!) because I think these books are not only inspiring but also a breath of fresh air–a reminder that “Hey, God really does desire to answer my prayers!” The whole concept of “making circles” when you pray isn’t a weird new-age-y thing, it’s based on an old story about Honi the Circle Maker.

Apparently, the Israelites had been in a drought for a year. They felt as if their prayers were hitting the ceiling and for sure, nothing was coming down to them. Then they remembered Honi who had prayed for rain before and God had answered his prayer. They called for Honi and when he arrived, Honi did something very unusual.

He took his staff and drew a circle in the sand around himself. While standing in this circle he knelt and prayed to God, “Lord, I will not move from this circle until you send rain.” Suddenly, it began to sprinkle.

The people were unimpressed. But Honi stayed in his scircle and prayed, “God, not for such rain have I prayed! But rain that will fill cisterns and jars!” Then, the rain turned into a storm that people were afraid and ran to take cover. 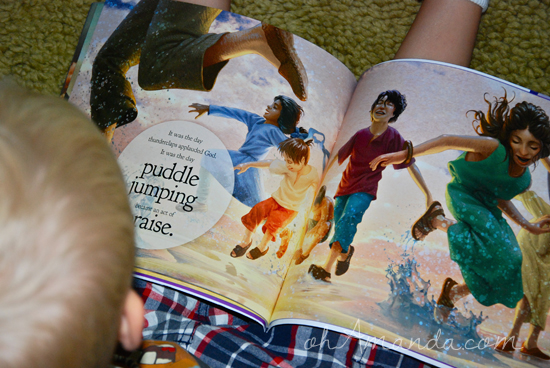 Again, Honi stays in his circle and prays, “Oh, God, not for such rain have I prayed. We need the rain of your favor and blessing.” A gentle, nourishing rain began to fall and the people of Israel rejoiced.

Isn’t that lovely? This picture book tells the same story (but a lot better, of course!) and I love the simple device of all the text in circles, too. All the important words are bolded and honestly, you could almost just read them and get the point of the story. 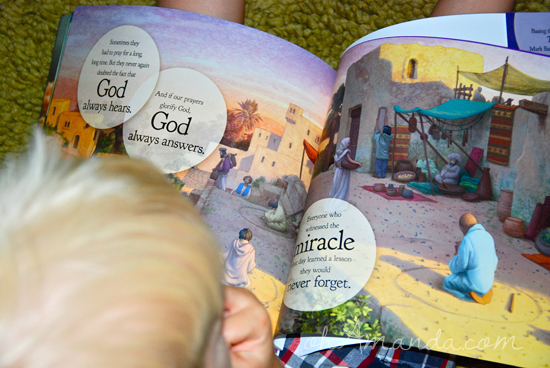 Plus, the pictures are gorgeous and somehow show the heart change of the people who saw Honi’s faith. I, of course, cried as I read the book to Lydia and Asa. How I want them to know and live big bold prayers! 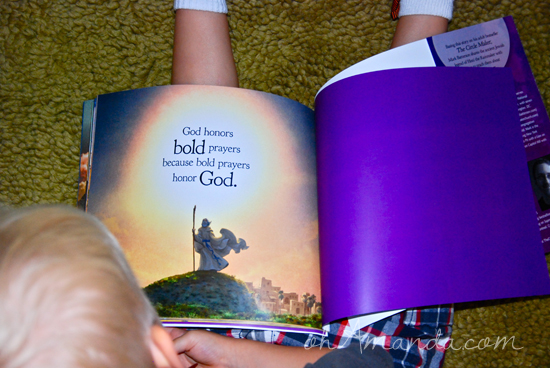 Now, onto the craft. I wanted an actual circle in the sand to use as a reminder to stay-in-the-circle and pray for my children.

So, I grabbed a little canvas I had at home (this one is 5×5, I think), some alphabet stickers, mod podge and some colored sand. 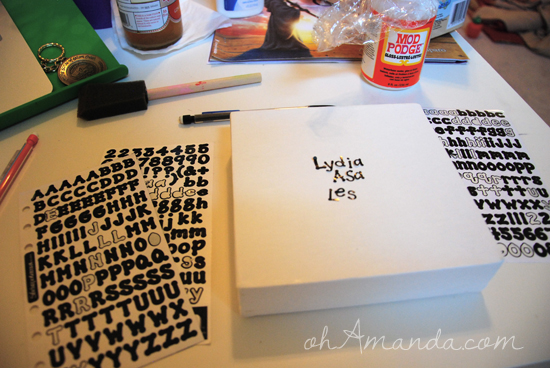 I mod podged the stickers to the middle of my canvas. I was just going to write my kids’ names and then realized, hello–I want to pray circles around my husband, too. So, I added his name. And yes, I realize he’s not my kid. 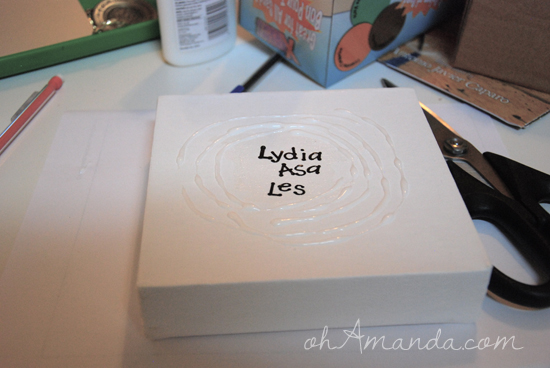 Now I grabbed a new bottle of glue (yay back-to-school prices!) and drew circles around their names. I wanted it to look like the front of the original Circle Maker book–kind of like hand drawn, not-really-connected lines. 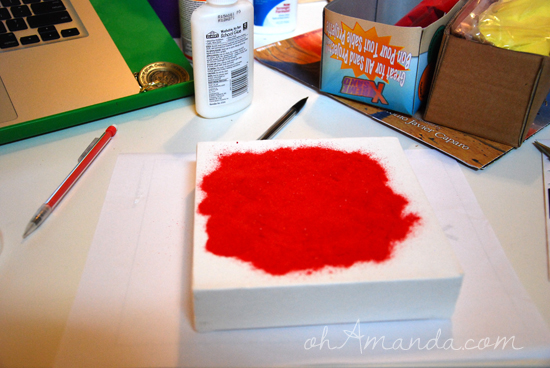 Then I poured colored sand on top of the glue and let it dry for a bit so the glue wouldn’t run. After a few minutes, I dropped the sand off and voila–

All the sand stuck to where I had mod podged the silly stickers! Bah! So, I dipped my finger in the sand again and rubbed it all over the white parts of the canvas. It kinda made it look a little more congruent.

Then after the glue completely dried, I modpged the entire thing again. I have to admit, it’s not exactly what I wanted. Maybe the red and white is too stark? (Oh, how lovely purple would have been!) But now that it’s sitting up on a shelf, it’s growing on me. I’m working on getting a desk for myself (I just do the whole tote-the-laptop-around thing) and I want to put this on my desk to remind me of what my real job is–being a wife and mom, one that is led by and leaning on the God who answers prayers.

I want to try to make this same kind of craft with the kids. Maybe a I’ll paint the whole thing with chalkboard paint first so we can write prayer requests inside? Or maybe use stickers to put a Scripture inside instead of names?
Let me know if you make one because I’m sure it will be cuter and I’d love to see more fun ideas that help us keep prayer at the forefront of our days!

This book was provided to me for a review. The craft in all it’s glory (and my thoughts on the book) were my own idea. Affiliate links may be included. If you buy something via one of those links, it won’t cost you any more but it will support this site. Thanksomuch!