You are here: Home / books / 5 Tips on Prayerful Parenting from Mark Batterson 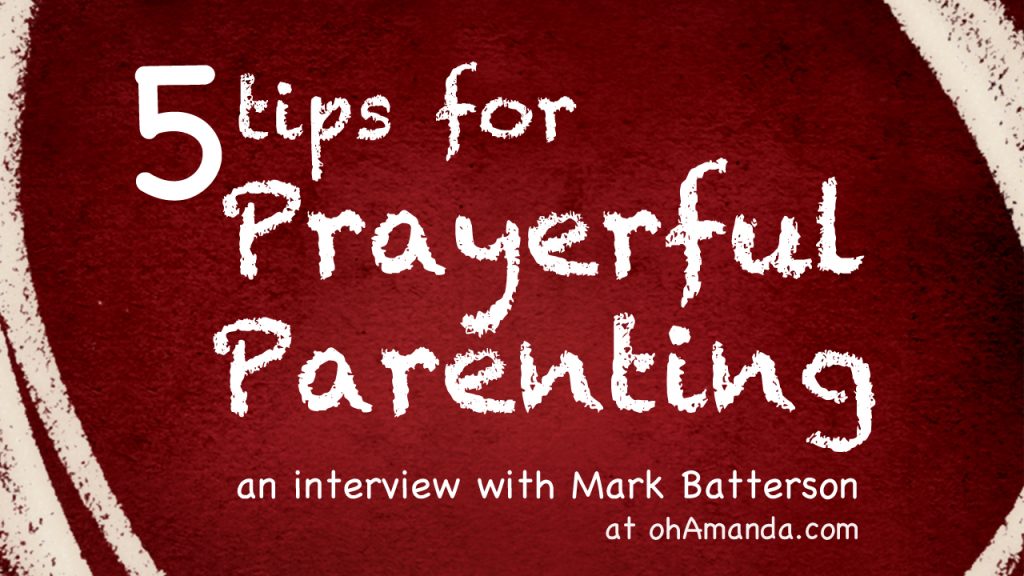 Yesterday, I interviewed Mark Batterson, pastor and author of The Circle Maker. I had already underlined 3/4 of his book and then took about two pages of notes during our conversation so to say that I’ve got a lot to say is an understatement!

I read The Circle Maker a few months ago because I had just recently read the parent’s version, Praying Circles Around Your Children and pretty much fell in love with it. This small 100 page booklet gave me two pieces of information that drastically changed the way I see prayer. Here’s the first:

Mark (can I call him Mark?) speaks so much about leaving a legacy of prayer or having a prayer genealogy. When I asked him about this (you know, as I do, chatting with authors and whatnot) he said, “I wrote a book on prayer. My father-in-law wrote THE book on prayer.” His father-in-law, grandparents and parents spent time on their knees and Mark believes those prayers are being answered for years to come in his own life. He believes “our prayers are genesis moments that create and change our genealogy.”

THIS is why I pray for my kids today. Not just so we’ll make it through today without too many meltdowns or arguments. I pray for my kids because I want a to place a foundation of prayer that will be answered in their life when they are adults, parents and yes, even grandparents. I want my grandchildren to know the power of a praying grandparent. I want God to work in the generations after me and I want to begin praying for it now!

The second thing I learned from these books is that “God doesn’t answer vague prayers”. In The Circle Maker Mark shares a life goal list–more than 100 items he’d like to do one day. We’re not talking about “be a good dad”, “have lots of people in my church”. These are specific (super cool) goals like “dedicte my great-grandchildren to the Lord”, “build an orphanage in Ethiopia”, “go to a cowboy camp with my boys”, “live off 10% and give 90% by the time we retire”, “visit the monasteries of Meteora in Greece”.

Do you know what it would take to have any of these things happen? Planning. Purposeful steps toward each one. This is an example of how our prayers should be–big, audacious goals we want God to do in our lives. Mark explains in the book that “the Aramaic word for prayer means ‘to set a trap.’ Prayer is the way we take thoughts and dreams and ideas captive.” What God-sized dreams do you need to set a trap for? What God-sized dreams do you need to write down and ask God about specifically?

When I interviewed Mark (you know, on my cellphone), I asked him about his goal list (and the similar one his son Parker shares in the Student edition of The Circle Maker) and he said it was very vulnerable putting that list out there–like all your secret dreams for everyone to see. He also said he was proud of his son for doing the same thing. It must be hard as a 16 year old to let everyone see what your dreams and goals are.

I also asked Mark about writing the Student Edition of the Circle Maker with his 16 year old. How does this happen? And omg, I want to write a book with my kids one day! Don’t you feel like you’ve arrived in parenting when you write a book on prayer with your son?! 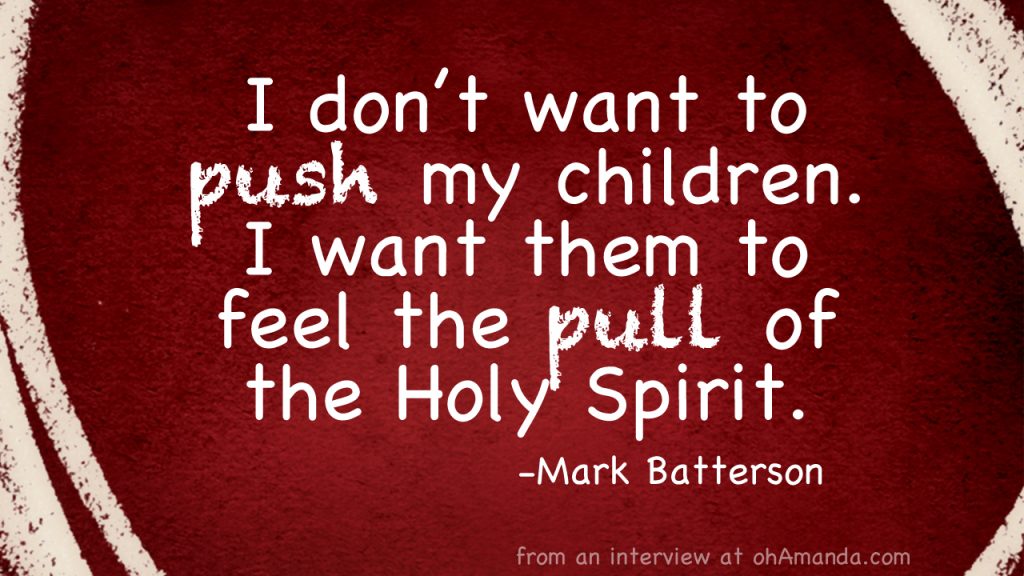 So, as I read the books and talked to Mark yesterday (did I mention, I got to talk to him? called him on the phone and everything?) what I really wanted to know was more about praying for your kids and raising them to serve the Lord.

Here’s a few things he told me…

1. Model it. If you model it, they’ll get it. When you are living out the gospel in your home–with authenticity and being quick to admit failure, your kids will follow your journey with the Lord.

2. We will fall short. But we have a Heavenly Father who will compensate for our parenting failures.

{How ’bout you read that again and just rest there for a minute? *sigh*}

3. Prayer modeling. (I mean, how do you model such a private discipline?) Texting the kids a “I’m praying for you today…”, kneeling in prayer as a family and (I love this one) asking the kids to pray for a specific need you have.

4. Discipleship Covenant. Mark talks about this in his book and it is an amazing thing he did with his son the year he was 12 turning 13. I can’t explain all of it but it’s where the life goal list came from. He said he got the idea from Raising a Modern Day Knights and it was very significant for him and his son.

5. Mantras. Mark discusses “prayer mantras” in his book. Mantras meaning Scriptures you’ve discovered, prayed about and written down then pray continually for a specific subject. For example, he prays Luke 2:52 for his kids. He said his kids have heard him pray that so often, it’s ingrained into them. He’s praying that Scripture as a circle around them–that they will grow in wisdom and stature and in favor with God and man. Their hearts hear it, he hears it and God hears it. He told me, “When we pray, we become prophets.” God’s Word is alive and God commands us to use it!

Are you inspired yet? There are so many other re-tweetable comments and insights I’d love to share with you but I think it would probably be better if you just read the book. The Circle Maker is an amazing resource that will encourage you and challenge you to pray circles around your life and those around you.

If you are a parent, you need to (as in do it RIGHT NOW) get Praying Circles Around Your Children which is a small booklet based on The Circle Maker. It’s only $1.99 for Kindle. (It’s only $2.99 in the softcover and if you have Amazon Prime, there’s free shipping and you are good to go! Oh, Amazon Prime, how do I love thee?!)

If you’ve got a student in your life, grab the new Student Edition of The Circle Maker (which just came out a month ago!)–it’s been teenager-ized by Parker and has some very insightful questions at the end of each chapter.

Ohh! I didn’t even TELL you about the story behind The Circle Maker! Gah! That’s the coolest part! Got a sec? I’ll tell you the short ohAmanda version…

Israel was in a drought. They called for Honi, an old sage. He put his staff in the ground and drew a circle in the sand around himself. He looked up to heaven and said, “Lord of the universe, I swear before your great name, I will not move from this circle until you have shown mercy upon your children .”

And what do you know? It began to rain. But only sprinkles and small drops.

Honi was not done. He turned to heaven again and said, “NOT FOR SUCH RAIN HAVE I PRAYED, but for rains that will fill cisterns, pits and caverns.” (emphasis mine)

And it began to pour. It poured so heavily, people were afraid.

Honi prayed again, “Not for such rain have I prayed, but for rain of Your favor, blessing and graciousness.”

Then a satisfying rain came down, answering Honi’s prayers.

HOW MUCH DO YOU LOVE THAT?

Oooh, I forgot to tell you! There’s going to be a kids’ picture book of Honi and his prayer coming out later this year! Talk about teaching your kids to pray!

If you’d like to hear Mark tell this story (and the story of his big prayer circle), take the kids’ naptime and watch this video. You will be inspired.

Have you read The Circle Maker? Do you have a big prayer circle to make?

I was not compensated for this post. I did receive the Student Version of the book in order to facilitate this review and interview. But I only accepted as I had already bought the other books and was sufficiently in love with them. All quotes from Mark Batterson and his books. Circle Maker background from TheCircleMaker.com, text by me.