You are here: Home / Purposeful Parenting / My Kids Are Cute, A Bible Story & A Book 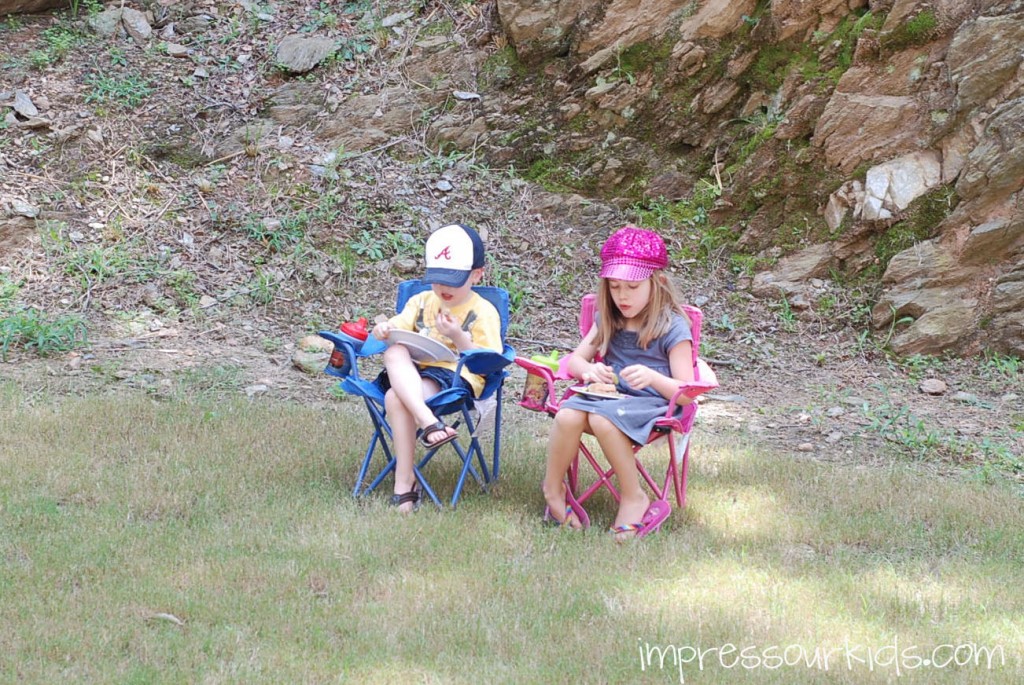 This is my kids at lunch today. They asked if they could get their fold up chairs out of the basement and have a picnic outside. They are also eating peanutbutter-and-jelly sandwiches with brussel sprouts. That’s gotta be the most incongruous meal ever.

I just love how they love hanging out with each other and making up their own little games and adventures. *sigh* I could eat them with a spoon.

And now the Bible story…

On the way home from Trader Joe’s/Target/WalMart today we were discussing Asa’s birthday party coming up in September. This led us to me telling the kids Asa’s birth story. (It was kinda exciting if you wanna read it!) Then I told them that we hadn’t picked Asa’s middle name until after he was born. I remember writing a list of possible names on some of the paperwork from the hospital!

So, I told them the story of the man who’s name we finally did choose as Asa’s middle: Nathanael. At the beginning of Jesus’ earthy ministry, he is going around recruiting his disciples. He talks to Phillip who gets so excited he runs to his friend Nathanael and says, “We found him! The one the prophets told us about! His name is Jesus from Nazareth!”

Nathanael replies, “Nazareth? What good can come from Nazareth?”

Phillip tells Nathanael to come and see for himself. So Nathanael does. The second he sees Nathanael Jesus says, “Now here is a genuine son of Israel—a man of complete integrity.” (John 1:47) Nathanael is shocked, “How do you know me?”

I can picture Jesus laughing here, the way a grown-up laughs at the naivete of a child, “I saw you under the fig tree before Phillip even came to you.” he tells Nathanael.

This impresses Nathanael so much he immediately exclaims, “Rabbi, you are the Son of God—the King of Israel!” Again Jesus laughs (in my imagination) and says, “You believe I’m the Son of God just because I told you I saw you under the fig tree? Brother, you better hang on, because you ain’t seen nothin’ yet!” (<–clearly my translation)

I love this conversation with Nathanael. It’s not a big teachable moment. There’s no sermon-on-the-mount sound bytes. Yet, this first conversation is recorded for a reason.

He scoffed at Nazareth, questioned Jesus’ compliment but once Jesus says, “I saw you” Nathanael (figuratively) drops to his knees to recognize Jesus’ true identity.

And this is what I want for my son. I want him to be a man who is full of integrity, open with his heart, his mind and actions. A man who would hear Jesus’ words and immediately bow his knee to what was spoken.

And now the book…

I got excited about Asa’s name all over again after reading Nathanael’s story today. It also reminded me of the book I just finished, Praying Circles Around Your Children by Mark Batterson. It’s a little 100-page mini book with some really practical and very inspiring truths about prayer for your kids.

One of Batterson’s ideas is “prayer mantras” which apparently got some people riled up because that sounds so magic-y. But this is far from magic words–this is about finding a verse (or verses) that the Lord would have you pray and speak over your child’s life. And then use those prayers often in your child’s hearing so it will be an anchor, a tether and a plumbline for your kids’ life.

This is one reason my husband and I were so insistent on good names for our kids. Not because of how they sounded, but what they  meant. I want my kids’ names to be a prayer on my lips. And today, I’m excited to pray that my son would be a man of complete integrity who believes in Jesus’ words immediately!

Do you have a special verse you pray for your kids?