You are here: Home / me / The Pirate’s Arrival

And here’s the birth story…finally…oh, and it’s kinda long, so get comfy…

Saturday morning when Lydia woke up at 4:30, I had already been up since 2:30. I felt sure that Asa was sitting on my bladder. Then I couldn’t go back to sleep because I was listening to Lydia flail about in the bed (calling for Nora) and I was just plain old uncomfortable.

When Les finally picked Lydia up and brought her to our bed, I snuggled in with her and noticed the same heavy bladder feeling. But then I was enough awake to realize it was feeling a little more like a cramp. As I lay there breathing in my little girl, I wondered if this was the start to a new life…and the last time it would be just me and her. I enjoyed the secret of the contractions while hugging my daughter for the last time as an only child.

That morning we were helping out at a puppetry festival (explanation here, because I know, it needs one). Our team was going to perform a creative ministry piece (sans puppets) about “testimonies”. During the song, several people held up cardboard signs (a la “will work for food”) with miracles God had done in their lives. When I heard they were doing this, I wanted to do it because God has done so much for us. Here’s the signs Les, Lydia and I held. 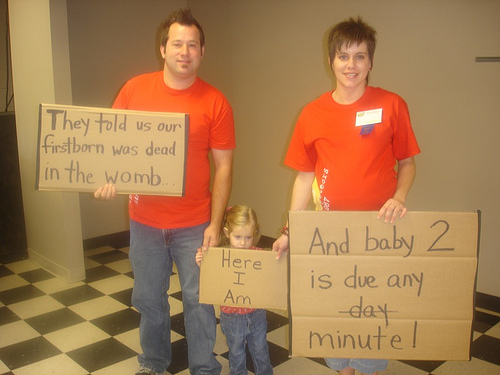 (for dramatic effect, imagine Les’ as the only one showing.
Then Lydia flips hers to show the words.
Then I flip mine while revealing my very large stomach!)

The best part about this is the contractions started getting stronger by the time we performed. At first I wasn’t sure if I was in labor or not but by this time, I was fairly certain. So, here I am on the stage talking about God’s miracle of birth, when in fact, I am in labor!

We left the festival about 1 and Les began cleaning the house (I know.) while I…labored. I was in the living room. In the kitchen. In the bedroom. In Lydia’s room. Dancing, crouching, kneeling, child’s pose and breathing out veeeerrrry loudly. Les did a good job keeping Lydia “out of my way” when I needed to be alone. But sometimes she’d come in and “do exercises” with me or talk to me. She was not concerned or upset. It was getting consistently worse and by 3:00, I said, “Weneedtocallthedoctorweneedtocallthedoctor.”

I had been timing the contractions (via a cool website) at the beginning and they were about a minute long and anywhere from 2-3 minutes apart. When they started getting bad, I wasn’t recording them anymore. But we called the nurse anyway before heading to the hospital. Because it was Saturday the nurse had to CALL US BACK. And when we missed her call because I WAS IN PAIN, I started getting aggravated.

We called the il’s to spend the night with Lydia, Les went to find gas (he went to 5 gas stations. no such luck.) and I waited around for the dumb nurse. When she finally calls I’m in the middle of a contraction but she continues to ask me stupid questions. I wanted to say, “Do you not hear me?! I’m in LABOR!”

As soon as Les’ parents got to the house, I kissed Lydia good-bye and hopped cautiously crawled into the truck (because it had gas). We finally got to the hospital around 6. I started crying when I got into the lobby b/c I saw another mom leaving with her new baby. It was just getting overwhelming at this point. A totally new and unique experience. One that was coming to a close—quickly!

At this point I was really in pain. I was leaning over the chairs squatting and moaning and any other embarrassing thing you can think of in the waiting area. But I did not care!

We got to our delivery room and I heard the nurses say who the midwife would be (it could have been any midwife in our insurance group, not necessarily anyone I knew) and I recognized her name. It was the same midwife I talked to about doing natural childbirth! She stayed with me the entire time and I never even saw the doctor. And he never saw me. The nurse that was with us was also fantastic. She had been a labor and delivery nurse at a hospital in Michigan for 12 years that ONLY did natural childbirth. She said so many things that helped me visualize what I should be doing. (I’ll just leave it at that.)

Les thinks by the time all this happened and my iv was in it was about 7pm. They put me on the iv for my group strep b, put a monitor on me and checked me—I was dilated 8cm! I knew that if I had only been like 4cm, I may have caved & got the epidural! But 8cm was SO encouraging. The midwife said, “You can get it, but there’s no reason. Look what you’ve done. You don’t need it.”

After this, I had lots of big contractions and knew it was getting to the end. They didn’t make me stay in the bed so I got to move how I wanted. But my water still had not broken. Sometime during this my mom got there. Part of the time we chatted between contractions. Finally about 8:30, the midwife said, “I can break your water and you’ll go quicker but maybe more painful. Or you can keep with this and it will be longer.” I said, “Break it.” She did and the next contraction was the worst thing ever. I was like the women on tv who are screaming during labor. I literally almost fell off the bed, in the corner b/w the bars and was hanging on to Les for dear life. Anyway, after that contraction, the midwife said, “Just tell me when it’s time to push.” And I said, “Will I know?” She said, “Yes.” Sure enough, a few minutes later, I did. And I think I pushed for 45 minutes before he was born.

The first few pushes did nothing. I could see it in the mw/nurse’s faces. Finally, when he actually started moving, I felt him. I can’t describe it, but I did. It was the first movement of “delivery” I felt.

Then once his head came out a little, they said, “Do you want to touch him?” The thought of his head hanging out of me and me touching it wanted to gag. I said, NO! Then, I pushed a few more times and he was here. I know this is gross, but when he was in the canal and his head was out, I swear he felt like he was the size of a quarter. So, when his whole head, shoulders and then all came out, it was just so strange that he was SO BIG. The MOST surreal and unbelievable feeling ever. I remember when Lydia came out (the pressure versus no pressure) but with this, it was even weirder. The midwife picked him straight up and put him in my arms—all slimy w/his cord attached. I could feel the cord laying across my leg. 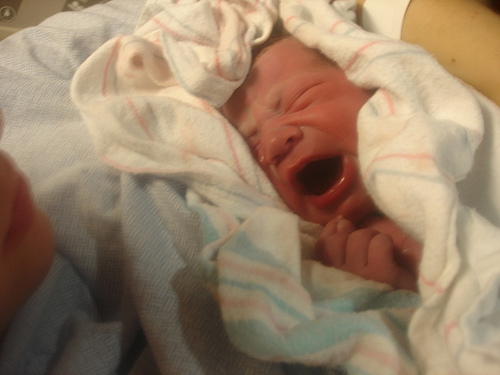 I don’t know what I was said as Les and I looked at him but it was basically, “I can’t believe it!” I had the same feeling with Lydia—here is this own singular person. I mean, he’s my son, who lived in my womb for 9 months, but really, he’s just his own person!

I think they put him in a blanket and semi-cleaned him while Les cut the cord. Asa came out with his arm around his neck like draped over, so his elbow was up. And he reopened my episiotomy scar (just part of it), so I had to be stitched up. I continued to hold him while the midwife did this. YIKES. That part may have been worth an epidural. *shudder*

Overall, it was the exactly what I prayed for. It was the delivery I wanted. I had a midwife and nurses that wanted to do what I wanted to do. I didn’t feel rushed or pitied or ignored. I felt involved and in control.

When Lydia was born, it seemed like the doctors just handed her to me, but I delivered Asa. An amazing experience. 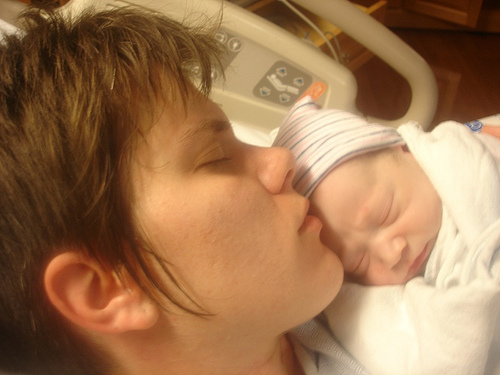