You are here: Home / me / The Most Amazing Day of My Life

On my playgroup/messageboard for Lydia, Jodi started a thread about posting a link to our kids’ birth stories. Some of these girls have been on this messageboard since they found out they were pregnant. So, today I’ve been reading the birth stories of all the sweet little babies I’ve *known* for the past two years (I joined the group when Lydia was about 3 months old). I didn’t have a link to post, but decided that having Lydia’s birth story in a digital format was a good idea!

I did write it down originally in Lydia’s journal. It’s a journal I keep to just write my thoughts to her. I’ll give it to her one day. Maybe when she has her first child. It took me 3 separate occasions to get the whole thing written and because I was half out of it, I’m pretty sure the time line doesn’t add up, but it’s what I remember. It’s not altogether the best thing I’ve ever written, but as a new mom loving on her newborn, this was the best I could do!

So, if you’d like to read Lydia’s birth story, read on…

When I was pregnant with you I was so proud! I loved seeing my belly grow and feeling you move. Sometimes my stomach looked like the waves of the ocean because you were moving so much! Two days before you were born, you started slowing down. Then on Wednesday (January 4), I had a doctor’s appointment. When she found out you weren’t moving she sent us to get an ultrasound to make sure you were ok. The tech said, “Are you ready to have this baby?” because she thought you were ready! She told us you probably weighed 8lbs and 8 oz! Then Dr. Favor did another test where they tracked your movement and heartbeat. When she saw those results she said, “Are you ready to have this baby?” So, they sent us down to the Labor & Delivery part of the hospital and we checked in. I just walked up to the nurse behind the counter and handed her the paper from Dr. Favor and said, “We’re going to have a baby. What do we do?”

She brought us to a room, put me in an ugly hospital gown and made me get in the bed. We knew you wouldn’t be born that night because Dr. Favor just wanted to monitor you (b/c you weren’t moving, the amniotic fluid was low) then she was going to break my water and start inducing in the morning. So, your Daddy & I called everyone. Grandmama and Papa hopped in their car as soon as church was done to see you! Daddy had to get Wednesday night church together–we ordered pizza for the kids to celebrate you. Then Daddy went to Applebee’s to get us some dinner! We ate and then went to bed early to get ready for you the next day. 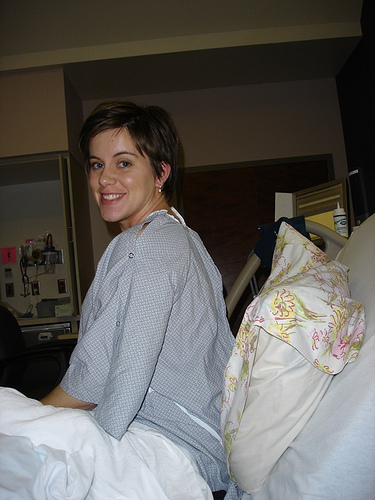 About 10:20, as we were going to bed, I heard a pop inside me and my water broke! Then my contractions started. We still tried to sleep but my contractions got worse and worse. So, I called the nurse about midnight and she gave me some pain medicine. It made me “loopy” (her words). So even thought I felt the contractions, I didn’t really know what was going on. I felt like I was in a wave! (Daddy didn’t like the medicine because it affected you, too. Your heart rate got really low.)

By about 2am, I was coming out of that medicine and my contractions started getting bad! I made it about an hour and a half and then called the nurse. I kept watching the second hand on the clock knowing exactly when the contraction would stop so I could have a minute of relief. Daddy was getting worried because I was grabbing the rails to the bed and making weird noises. I asked the nurse if I could have more pain medicine or how close was I to getting an epidural. She measured me and said I was 5cm.

So, at 4am, we called the doctor. The doctor had to get up and come from home. It took her at least 45 minutes to get there. And my contractions were getting worse! She (it wasn’t Dr. Favor, but another doctor in the practice) got there and said the epidural guy could come. He finally came at 5ish and gave me the epidural. They made Daddy leave the room. I had to sit on the edge of the bed and lean my head against the nurse’s chest. Once I said, “Can you come closer so I can lean against you more?” It hurt SO bad! But by the time the doctor left and the nurse said, “”Did you feel that last contraction?” I said (with relief and surprise), “No!”

(Backtrack: Grandmama & Papa were coming to Bham right after church. They were going to go straight to our house and spend the night. But when I called and said my water broke, they came straight to the hospital (no idea what time this was…). Grandmama started crying as soon as she saw me. They only stayed a few minutes and promised they’d be back about 6 in the morning.)

So, Grandmama and Papa got to the hospital about 6. Daddy took a shower. Dr. Favor came in and said it was time to push! So, at 8am, the nurse, Robin and your Daddy helped me begin pushing. Before Grandmama and Papa left they prayed for me and you. 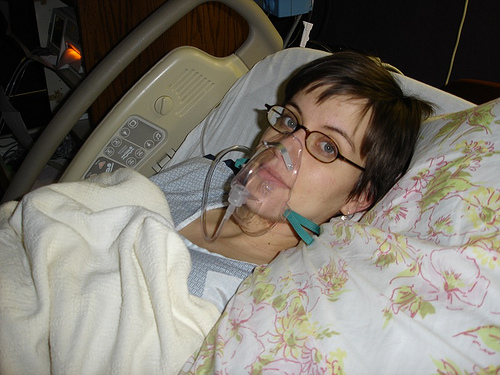 I pushed for about an hour. The nurse kept saying, “I can see her hair!” Finally Dr. Favor came back and put me up in stirrups (yuck) and had me keep pushing. After awhile she said you were getting tired. (I know I was! I was falling asleep between pushes!) So, the nurse pushed on my stomach and Dr. Favor had to use forceps on your head. She was pulling on you while I was pushing. (I wasn’t looking but could hear Dr. Favor grunting as she pulled you.)

Your dad just held my hand and prayed. (Later I found out he was praying because HE was terrified. He said he had never seen so much blood. Ew.) As soon as you were born (at 9:31am and only 7lbs 5oz!) I felt you come out and your Daddy was crying. He said, “She looks just like you!” I said, “That did not just come out of me!” (I just didn’t know you were going to be so your own person! I guess I expected a little light from heaven and a moment when we looked into each others eyes and you said, “Yes, she’s my mommy.”) Then they put you on my chest for a second but you were so bloody. They began to clean you off and do all the stuff you have to do and your Daddy got out the video camera and the digital camera going at once. Finally I said, “Put those down and touch her!” He did and started talking to you. 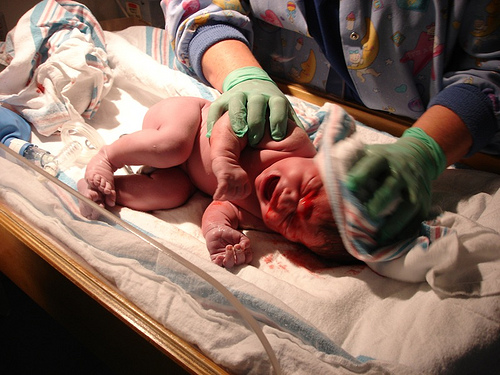 Finally, they brought you back to me and me and Daddy just looked at you and talked to you and rubbed on you. The nurse said, I don’t think those 2 would know if there was anyone else in this room.” It was true. It was a very surreal moment, looking at your for the first time. How could you have just come out of me? How could you be a piece of your Daddy and of me? How be so perfect?

I cut out a little bit and added a little bit of stuff I remembered, but there it is! My little Lydia’s birth story. What an amazing day! I can’t believe I get to do it again soon!