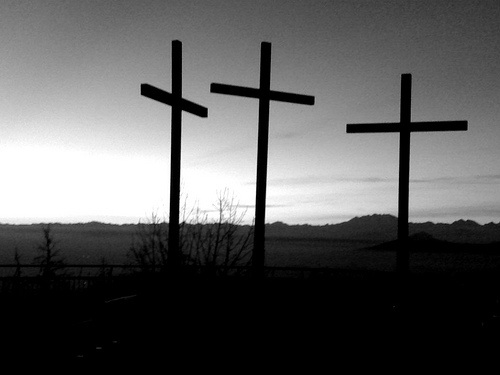 The crucifixion did not become common in art until all who had seen a real one had died off. -CS Lewis

I’ve had this post brewing in my head since last Sunday. When I got to church last week, it was already time for Asa to eat. So, I sat in the nursing mother’s room and watched the musical portion of the service. When I finally got into the adult auditorium, our pastor was already speaking. And already there was a hush in the room.

He took us through the book of Mark chapter 15, which tells the story of Jesus’ trial and crucifixion. If you live in the United States you’ve probably heard “Jesus died for you.” or something along those lines. But it’s a phrase that’s easily said and just as easily forgotten if you don’t know the actual story behind it…

Very early in the morning, the chief priests, with the elders, the teachers of the law and the whole Sanhedrin, reached a decision. They bound Jesus, led him away and handed him over to Pilate.”Are you the king of the Jews?” asked Pilate. “Yes, it is as you say,” Jesus replied. The chief priests accused him of many things. So again Pilate asked him, “Aren’t you going to answer? See how many things they are accusing you of.” But Jesus still made no reply, and Pilate was amazed. Now it was the custom at the Feast to release a prisoner whom the people requested. A man called Barabbas was in prison with the insurrectionists who had committed murder in the uprising. The crowd came up and asked Pilate to do for them what he usually did. “Do you want me to release to you the king of the Jews?” asked Pilate, knowing it was out of envy that the chief priests had handed Jesus over to him. But the chief priests stirred up the crowd to have Pilate release Barabbas instead. “What shall I do, then, with the one you call the king of the Jews?” Pilate asked them. “Crucify him!” they shouted. “Why? What crime has he committed?” asked Pilate.  But they shouted all the louder, “Crucify him!” Wanting to satisfy the crowd, Pilate released Barabbas to them.

I always wonder about Pilate in this story. He was Rome’s agent. I’m pretty sure he was a bad dude. Yet, he doesn’t seem to like the Chief Priests. In fact, he recognizes the only reason they are trying to kill Jesus is because they are jealous of him. Pilate tries everything to save Jesus. But the crowd won’t have it. The chief priests won’t have it. And if you’ll notice, neither will Jesus. He wasn’t pleading for his life. He wasn’t trying to talk Pilate into letting him live. He was so quiet that Pilate was shocked.

He had Jesus flogged, and handed him over to be crucified.The soldiers led Jesus away into the palace (that is, the Praetorium) and called together the whole company of soldiers. They put a purple robe on him, then twisted together a crown of thorns and set it on him. And they began to call out to him, “Hail, king of the Jews!” Again and again they struck him on the head with a staff and spit on him. Falling on their knees, they paid homage to him. And when they had mocked him, they took off the purple robe and put his own clothes on him.

Rome had to be a scary place to live. People were flogged and killed in public forums. Roman soldiers were more frightening than any boogeyman. When they flogged someone, it was with whips laced with bone and glass and metal. They whipped until the brink of death. The whips wrapping around the torso, the legs, the arms and yanking out bits of flesh. These soldiers continued the torture with mocking and jeers.

Then they led him out to crucify him…They brought Jesus to the place called Golgotha (which means The Place of the Skull). Then they offered him wine mixed with myrrh, but he did not take it. And they crucified him.

They. Crucified. Him. How final. How chilling. It must have been disgusting work crucifying someone. Did the soldier’s look in the victim’s faces? Was the crowd cheering with each cry of pain? Was anyone standing up for human rights back then?

The cross was a despicable way to die. The victims were nailed to the cross bar with giant nails—similar to railroad spikes—in between the two bones in the arm. If that was all that had been done, it would have been enough. Unable to lift yourself up, you would suffocate in a minute. It would be similar to hanging oneself.

But Rome apparently knew this, so they nailed the victim’s feet to the cross so they could push themselves up to heave a breath in. Heave a breath out. Imagine pushing yourself up on a nail in your foot—the nerves that would be shooting in pain. Imagine your tattered back sliding up and down on the rough cross. It would take hours and sometimes even a full day for the victim to die.

At the end of the day, the soldiers would walk by and break the legs of the victim, so they would suffocate. When they came to Jesus, he was already dead. Not because he had gone into shock. Not because his flogging or crucifixion was any worse, but because He GAVE up His life.

In a letter to the Philippians, Paul writes that Jesus humbled himself and became OBEDIENT to death on a cross. Jesus LET himself die. He wasn’t forced into it. Many men died on the cross, but Jesus CHOSE to die on the cross.

Many rebels had stirred up Rome’s anger. And they had all paid the price. But what of your rebellion? Of mine? I will never have to pay for it. I have rebelled against God. Against His plans for me. I have rebelled against His love. And still, Jesus chose to die in my place. Jesus chose to take my rebellion like it was His own. Jesus was seeing my face, my sin, my life as he breathed in and out on the cross.

This Good Friday, I pray you see the cross. As it was intended–a picture of suffering and shame.

Then I pray you see Jesus. As He intended it—with arms outspread, inviting you to accept His gift, His love, His life.

(To hear the original…and much better sermon, click here.)