I found this craft online years ago and always wanted to do it Easter Sunday at church. Alas, there aren’t usually ovens on hand during Easter Sunday church services. Now that Lydia is old enough to kinda sorta a little bit understand about Jesus’ death and resurrection, I thought it was time to finally do this one! 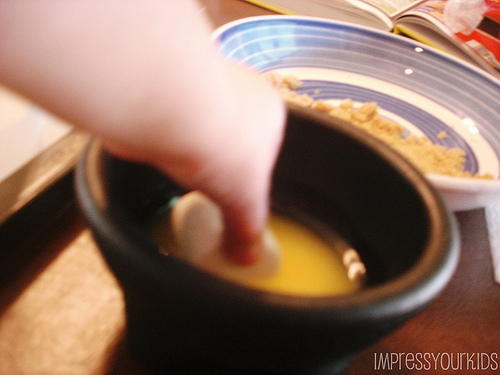 I told Lydia we were pretending the marshmallow was Jesus. (I know. Just go with it.) I explained how when Jesus was put in the tomb the women were going to rub his body with precious oils and good smelling spices. So, that’s what we were doing–dipping Jesus in the butter…er, oil. (I know, it’s weird. Keep reading.) 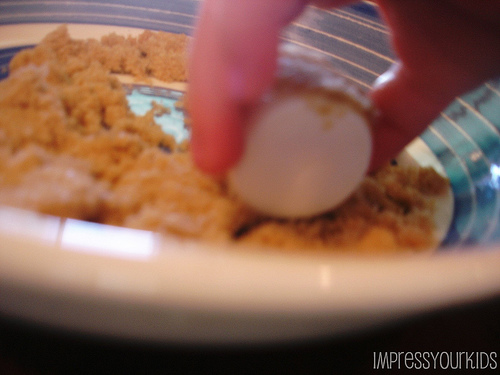 Or you know, roll Jesus in the spices. 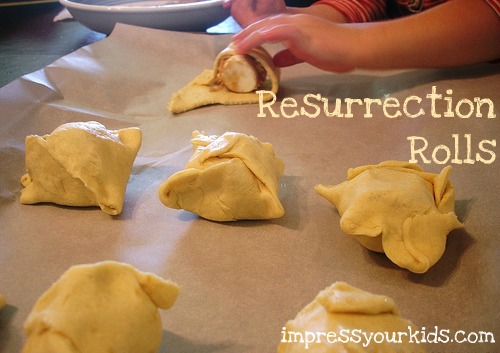 Place one marshmallow on the wide end of a crescent roll. Roll up and make sure you pinch the edges so it’s sealed tight!

Now, I explained to Lydia about the tomb and it being sealed with a rock. So we pretended the crescents were the tomb and we sealed Jesus…er, the marshmallow up in the tomb. 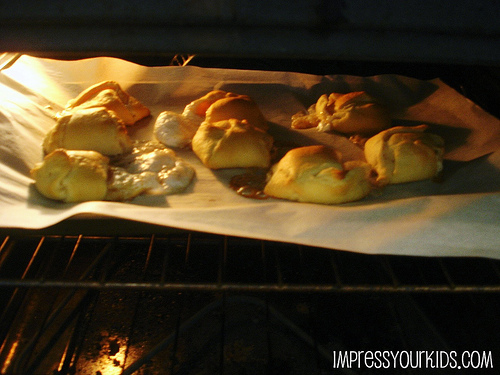 Cook for the appropriate amount of time.

If you don’t seal the crescents up tight, your marshmallows might leak out…not a pretty sight. And kinda confusing if you’re pretending they are supposed to be Jesus…

As we waited for the tomb-snacks to cook, we read a few stories about Jesus’ death and resurrection. Lydia had lots of questions to ask. Some of them were about the pictures in the book. But some were about the angel that rolled the stone away or other aspects of the story. She was definitely interested.

When the timer rang, I put one tomb-snack on Lydia’s plate. I reminded her that this snack was like Jesus in the tomb. I asked her what she thought happened to the marshmallow. Then we opened up the crescent and peeked inside. Our marshmallow was gone! It was a big empty roll! And Lydia was AMAZED. She stared at it—and was almost afraid! She said, “But where did it go?!”

I explained to her that just like we were surprised that our marshmallow was gone, Jesus’ friends were surprised, too. They didn’t expect Jesus to come back to life. But he did! And he’s alive today. 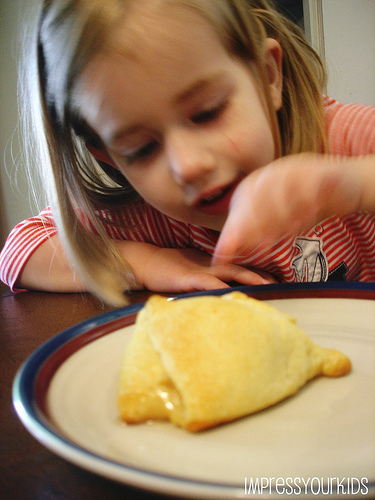 Later on that day, when my husband came home, Lydia told him all about our snack. She said, “We pretended the ma’smewwow was De-dus!” Then she described how the marshmallow was gone and said, “I was like…I was like…” but couldn’t put her finger on the emotion she felt! She was so excited and I *think* she caught the idea of the surprising and amazing miracle of Jesus resurrection!

(oh, and I *did* finally tell her the marshmallow just melted and wasn’t resurrected!)

PS: these were DELISH.

❮ ❮ Losties & Non-Losties.
What Do You Do With The Cross? ❯ ❯