When I went to Blissdom, Kat told me to find her friend (and non-blogger), Lori. We met at the Kellogg’s booth and started talking about Christian Music. She owns her own PR firm in the Christian Music biz and works with all kinds of people in Nashville. I pulled Staci over (my Christian Music partner-in-crime) Then Lori uttered the magic words, “My husband works for TobyMac.” And right then and there, we knew we’d be best friends with Lori.

The conversation then turned to the Dove Awards–which are like a smaller version of the Grammys. Only for Christian music. It was to be hosted in Atlanta for the first time ever and Lori was going to basically be IN CHARGE OF IT. That’s when the stars aligned! “PICK US! WE’LL DO IT! CAN WE WORK AT THE DOVE AWARDS WITH YOU?” 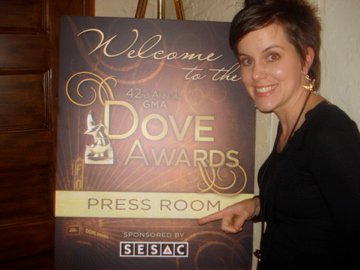 And so we did. A few weeks ago, Staci donned our shouldn’t-we-be-doing-a-black-light-number black pants & top with comfy-not-cute shoes and headed to the fabulous Fox Theatre to hobnob, mingle and otherwise stalk our famous heroes. Oh, and help Lori, too.

It’s kinda hard to describe what we did…but basically we were bouncers for the VIP interviewers like JCTV, GMC, CCM and Hear It First. When an artist would win, they’d walk back to the photo pit (for some solo pictures), the main media room and stage (for the everyday-press to address them) and then, if they were the chosen ones, to be interviewed by our VIPs.

So, we got to lead the artists and their publicists through the maze of interviews, keep them straight and make sure they all got their 15 minutes of fame (er whatever…). We were so super famous that Staci had a secret-service-ear-bud in and I…well, I just did whatever she said.

Of course, I was SO busy that night I only took one picture. But I’ll steal link to a few off flickr and facebook so you can see all the awesomeness that went down. And now, my…

TOP TEN AWESOME PEOPLE I MET (OR AT LEAST INTERACTED WITH) AT THE 2011 DOVE AWARDS!

You obviously knew this was coming. He was our first artist to arrive. I literally led him from booth to booth. He looked at me. Thank God he didn’t recognize me. And when he left, Staci and I breathed a sigh of relief, “Now that Toby’s gone, we can mess up if we want. At least we didn’t look like idiots when Toby was here.” {Also? He’s short.}

Was anyone around for early Christan rap? Well, T-bone was. And when I saw him at the Dove Awards (as an interviewer for JCTV), I couldn’t put my finger on who he was. I knew he was someone because he knew every single person that walked in and everyone was impressed to see him. (Not to mention he just lost 100 pounds!) When he was interviewing the artists, he was an absolute dynamo. A firecracker.

I never introduced myself but I talked to him eleventybillion times and brought him water while bringing the artists through is booth. Anywhoo, when I told my brother I met T-Bone, he started singing/rapping one of his songs. So, I felt justified in my starry-eyes. {Also? He’s totally Southern California. Reminded me of my family.}

I had Sandi Patty’s kids TAPE and can still sing all the songs. In fact, I might need to find the Friendship Company for the kids. There’s even a puppet on it. A puppet that is a friend of mine. (WOW. Could that paragraph be any weirder?)

Anywhoo, Sandi is Staci’s idol, she was our first picture of the night. 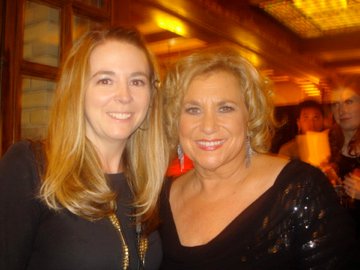 Yes, as in RUeeeebaaan Studdard! 205 represent’n! I mention him because we both lived in Birmingham. Also because he is large and in-charge. AND HE GAVE ME A HIGH FIVE. So, that makes me famous or something.

We learned a lot of lingo and inner-workings of the music industry. OK. Well, not a lot. But more than we knew before. And one cool thing was that we got to interact with the PR folks a lot. The individual publicists were in charge of more than one artist. So, we saw them several times throughout the night because they were walking from booth to booth with the artists, too. 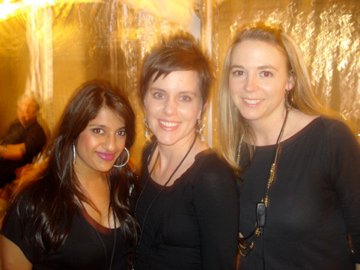 We totally decided we want HER job!

This is my dad’s favorite band. Favorite like he has a tattoo of their logo on his arm. His first tattoo. That he got at 51 years old. (That is a blog post right there. Remind me to tell you about it.) I told Kevin (lead vocalist) the whole story (the one I haven’t told you, that I need to write about). This was the only artist picture I got on my camera. So I could text it to Daddy.

Remember these guys from The Sing-Off? That a capella American Idol-ish show? Well, this is the group that won! Les and I totally watched that show and I loved it! Anywhoo, they sang in every booth. And then, when they got to T-bone, he started beat-boxing (which is apparently actually called, “mouth percussion”.) They complimented him on it and then they stopped and said, “Wait. You’re TBONE? Like TBONE TBONE?!” Then they got all excited because they liked him back in the day. It was fun.

8. CMM and Hear It First

All the VIP Interview-ers were super nice to us. Which was good because we had NO IDEA what we were doing. We instantly hit it off with the folks from CCM and Hear It First.com. I was so impressed with how awesome and professional and super fun they all were! Here’s a pic of the CCM editor and her awesome computer stand rig! Ingenious, right?

OK! You know what to do! Join in the fun by writing a list on your blog–a list of ten! Then LINK back to me in it. PASTE the url in the linky below. And start LOVIN’ on the rest of the participants by tweeting (use the hashtag #toptentues), facebook-liking, stumbling (someone stumbled my Guest Book post a few weeks ago and it has had 20k hits!!!), commenting & just plain old READING their pots! For rules and a cute button see my Top Ten {Tuesday} page!