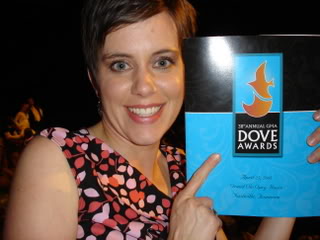 OK, so it’s not the Oscars, but still, it was pretty fun.

Staci has been wanting us to go to the Doves for years so a few months before my birthday, she hands me a wrapped present with a piece of paper inside. It was a printout of the Dove Awards. She said, “Will you go with me? It’s kind of a selfish present, because I’ve always wanted to go.” And the rest was history.

She picked me up on Wednesday morning. I put Lydia in her crib for her nap and we were off! It took us 4 hours to get there. We didn’t get lost or anything thanks to Magellen, our GPS.

We checked into our hotel room which was…uhm…2 stars at best. Then we decided to head over to the Grand Ole Opry House to scope it out & pick up our tickets. We could see people with cameras, a few people already dressed to the nines and then we saw it–“Media Room” signs! We followed those around the building and saw a few tents and a few security guards. So, we decided to wait. We just people watched for several minutes. It must have been time for the volunteers to show up because about 40 girls our age or younger  in black dresses paraded through and headed up the stairs. We almost followed them but we were too afraid. So, we didn’t see anyone picture worthy but we did realize that we were NOT going to dress up like we thought. We decided to go “business casual”!

We jumped back in the car, back to our cave of a hotel room and dolled ourselves up. Made sure we put on our sunglasses to look slightly famous and back to the Grand Ole Opry. The pre-show started at 5:30 and the official televised portion of the show wasn’t until 8pm. We decided to go in at 5:30 and if it was boring leave for dinner and come back at 8. And boy was it boring! It wasn’t produced at all–no text on the screens, no music, nothing!

But let’s see…we saw Superchic[k], Geoff Moore, Stacy & Teron of Grits, Red, Jars of Clay and even Will from Audio A out in the hall! He has a giant mohawk right now! We ended up sticking around the whole time and just people watching in the hall. Every time someone with an All Access Pass would go by, we’d say, “Who ARE they?!”

Finally the show started and it began with my crush, TobyMac! I gotta tell you I felt like those crying girls at the Beatles’ concerts. Kirk Franklin & Mandisa performed with him so that was cool. Mandisa looked hot! And Kirk had on a Virginia Tech hat and shirt. Here’s a pic. It’s Toby on the left and Mandisa in red on the right. 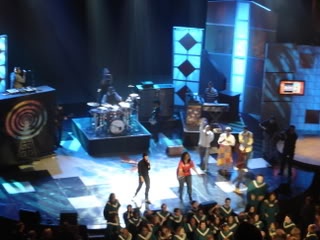 And here’s another picture I got…uhm…online… 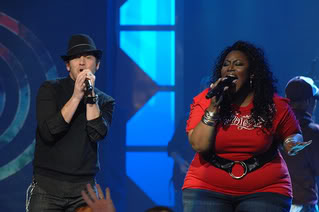 I had chills after that performance and I think I was the last person to sit down in the auditorium after it was done. *sigh*

There were some other performances and awards but after Toby I kinda had a hard time paying attention.

Kidding! I really liked Mac Powell from Third Day, Mark Shultz, Brian Littrell (from the Backstreet Boys) and Steven Curtis Chapman singing “By Your Wounds”. I mean, really. It was just amazing.

When it was done, we jetted so we could scope the hallways. There were tons of people walking around with Dove Awards in their hands, we just didn’t know who they were! So, we went back to the dungeon with zero pictures of us hugging a “famous” person.

The next morning, we drove to the famous Pancake Pantry, with no wrong turns thanks to Magellen. (For the record, I had the best french toast ever and some hashbrowns. Yumma!) And who is standing in line in front of us?

I’m telling you, my heart is beating fast as I type this! A little background- I’ve never owned a Backstreet Boys album. I don’t know one song by them. I vaguely remember hearing that one of the guys from one of the big boy bands had made a Christian album, but honestly, it didn’t interest me. So, I didn’t even know who Brian Littrell was until the Dove Awards. But I gotta tell you, I might have a little crush on him now.

He was funny, cute and sincere as the host. He hugged Bob & Larry, danced little jigs and talked to the audience during the breaks. Then he sang with some people I highly respect (Steven Curtis, for one) and then I went on his website after the show and read his bio and some magazine interviews. And I’m sold. He’s the real deal.

Ok, back to the Pancake Pantry. He’s standing in front of us with his wife (so pretty!) and his in-laws (we’re guessing) and holding his little boy (so cute!). We didn’t want to go up to him in the middle of line and say, “UH. Hey, we’re 30 years old and think you’re hot and can you set your son down so we can have a picture with you?” So, we controlled ourselves and just watched every move he made instead. They seated us about 5 tables away and we tried to inconspicuously take a picture of him but to no avail. Finally, I got up to use the restroom and when I’m coming out who ALMOST bumps into me?! Oh, yeah. Brian. Still, he was on his cell phone and I couldn’t stop him.

Staci and I leave the restaurant and sit on a bench outside to decide if we are going to stalk him or not. We see he and his family come out of the restaurant and we follow them—sorta! Our car was near theirs in the parking lot, what can I say? We are arguing with ourselves, “What should we do? Should we just walk up to him?” Finally, we get in our car, drive up to his and say, “Brian! You did great at the Dove Awards! We loved it!” and he just smiled and waved and said, “Thanks! Sorry, I don’t have my make up on today!” And we drove off! He was so nice and I feel like he would have talked longer if we weren’t so freaky. But as we drove away we were laughing so hard I was crying!

So, there it is. My brush with real fame. I yelled at Brian from a moving car. Oh yeah. You’re jealous.

OK, here’s one more of me on the main floor after it was done trying to rub elbows with the ccm-famous. Maybe Staci will update her blog soon with her pictures. (hint, hint, Staci!) 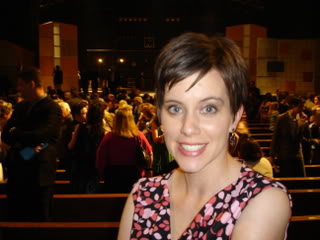 And if you want a real rundown of the whole show, click here or click here to see when it’s airing in your area. Who knows, maybe you’ll hear me screaming during Toby Mac’s performance!