I’ve discovered my favorite genre. I mean, it’s not that I didn’t know it before, it’s just that now I love it unashamedly and refuse to “spread my wings” or “broaden my horizons” and read other genres when I know what my heart wants: historical fiction. Not just any historical fiction. If it’s not late 1800’s to early 1900’s in the US, then it has to be World War II. And this year? It’s been World War II. I’ve read TEN books set during the second world war! I dunno, but that might make me an expert!

I update every book I read on Pinterest, of course, but I thought you needed to know about some of these what with summer reading happening and all that. So, without further ado, here’s my favorite World War II novels this year (and some of them maybe EVER):

Like a River From Its Course by Kelli Stuart

The thing that can happen with World War II novels (or really any of a subgenre) is that they all start to feel the same–same villains, same problems, same heroes. Like a River From Its Course is a fresh story set in Ukraine during the war. There really isn’t even a Jewish main character in all of the book. It’s part of what made me love this one–I felt the breadth of the severity of the war. I could really understand why it was a WORLD WAR, how the whole world could be affected by it. Shiver.

Anyway, this one is told from four different narrators–which I generally don’t like because I can’t keep track of them. But each of these narrators had a really true and clear voice. I fell in love with each of them (well, maybe not with one of them…) and literally could not put this book down. I carted it around for two days so I could find stolen moments to finish it.

The narrators are a German soldier, a young abused young woman, a teenage girl and her father. They tell stories I’ve never heard–of the “killing ditch” in Babi Yar, the Soviets being forcibly removed from their families to make bombs and even Germany behind-the-scenes. The author wrote all of it from fifteen years of research and interviews so although not a true story, all the stories are true. I just really loved this one–it had my crying and cheering.

Secrets of a Charmed Life by Susan Meissner

A young girl is taken from London with her sister to escape the blitz. In a moment of strong-headedness and I’m-grown-up, she makes a decision that alters her life and the rest of her family’s. It’s definitely a story about the war–but it’s really a story about the people of the war and how the worst of times change lives and alter destinies.

I thought the characters were rich, the story was compelling and it was completely heart-wrenching. If you like stories of sisters and family secrets you will love this one.

Meissner’s latest book, Stars Over Sunset Boulevard, is also set in WWII, although in Hollywood while Gone with the Wind is being filmed. It’s only $1.99 for your kindle right now and another good read.

The Girl From the Train by Irma Joubert

Written by a South African author, this was a completely intriguing story of a young Jewish girl on a train bound for a concentration camp and the young Polish man who set a bomb to stop the train. The story travels from Germany to Poland to South Africa and has such interesting insight about religion and family. Again, this was a fresh story from this era and one that will stay with me for a long time.

A Sparrow in Terezin by Kristy Cambron

Did you know the Germans had art classes for the kids in some concentration camps? I literally want to vomit just thinking about it. The duplicity in the Nazi mindset is…well, it’s unfathomable. That’s what this book is about–a half-Jewish girl taken to Terezin and made to teach the children there. It’s a heart-breaking story.

This is one of those dual-plot books and the modern day plot isn’t as exciting as the historical one and overall, it’s a lighter read than the others I mentioned, but it’s definitely worth a read. Note: the modern-day story is a part 2, so you might want to read The Butterfly and the Violin first.

Number the Stars by Lois Lowry

I don’t know how I missed this book when I was younger. Ohmyword, I loved it! It’s the story of a young girl in Denmark who discovers that her family is rescuing their Jewish neighbors from the Nazis. In fact, (spoiler) did you know Denmark saved almost every single Jew in their country?! This is a great introduction to the WWII story because it’s serious, exciting, tear-inducing without being graphic or horrific. I suggested that Lydia read it this summer and she really liked it.

These two books are both coming-of-age stories about a brother and a sister. Julien and his family move away from Nazi-held France to “unoccupied” southern France and has trouble making friends, coming to terms with his new town and new place in the world. It’s a beautiful beautiful story that I’ve read twice and want my kids to read one day. Defy the Night is about Julien’s little sister and her work with smuggling refugee children. It’s before any of them knew the horrors of Auschwitz and death camps so there is an eeriness and ominous feel to it. I sobbed through most of this one. Yet, both of the books have this hope and redemption and coming-to-God that is breathtaking.

The Nightingale by Kristin Hannah

This is the story of two sisters in occupied France and it is just horrible. Not the book, the story. Well, not the story, the situation. Oh, it’s just sad and sad and sad. Luckily, I like sad books. If you like stories of strong women who don’t feel strong, this book is for you.

I Stand at the Door and Knock by Corrie ten Boom

OK, so this isn’t a World War II book but it is written by Corrie ten Boom, a survivor of a concentration camp turned tramp for God. These are short radio sermons/devotions she gave in the Netherlands and are transcribed in the book as daily devotions. Her strength, ability to understand and extend forgiveness, her belief in God’s power and attention is just astounding and inspiring.

OK, what World War II novel should be next on my list? (I read All the Light We Cannot See and the Book Thief last year…)

Enter today by clicking the icon below, but hurry! The giveaway ends on July 18th. The winner will be announced July 19th on Kelli’s blog. 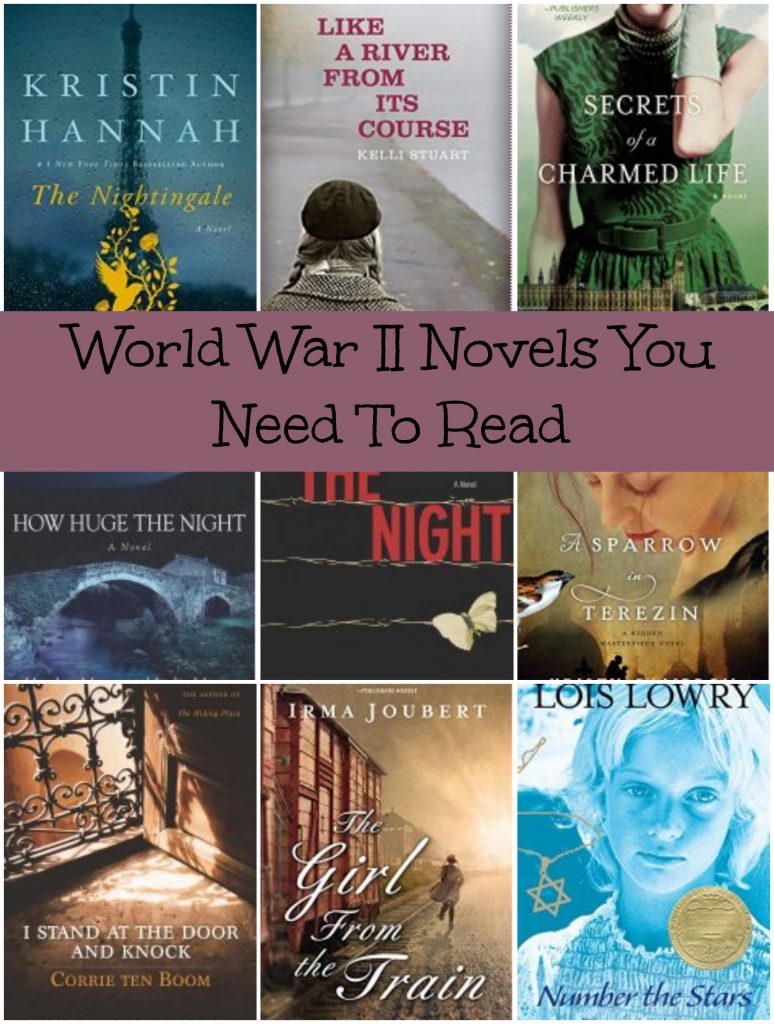 I was part of the launch team for Kelli Stuart’s Like a River From Its Course book. I applied because of my great love for WWII novels and the author. All thoughts/opinions/words mine.