Last year, when my daughter went to camp, Asa and I had our own Dragon Week. This year, Asa’s last year before he can go to camp (*sniff*), we had Treasure Hunter week! 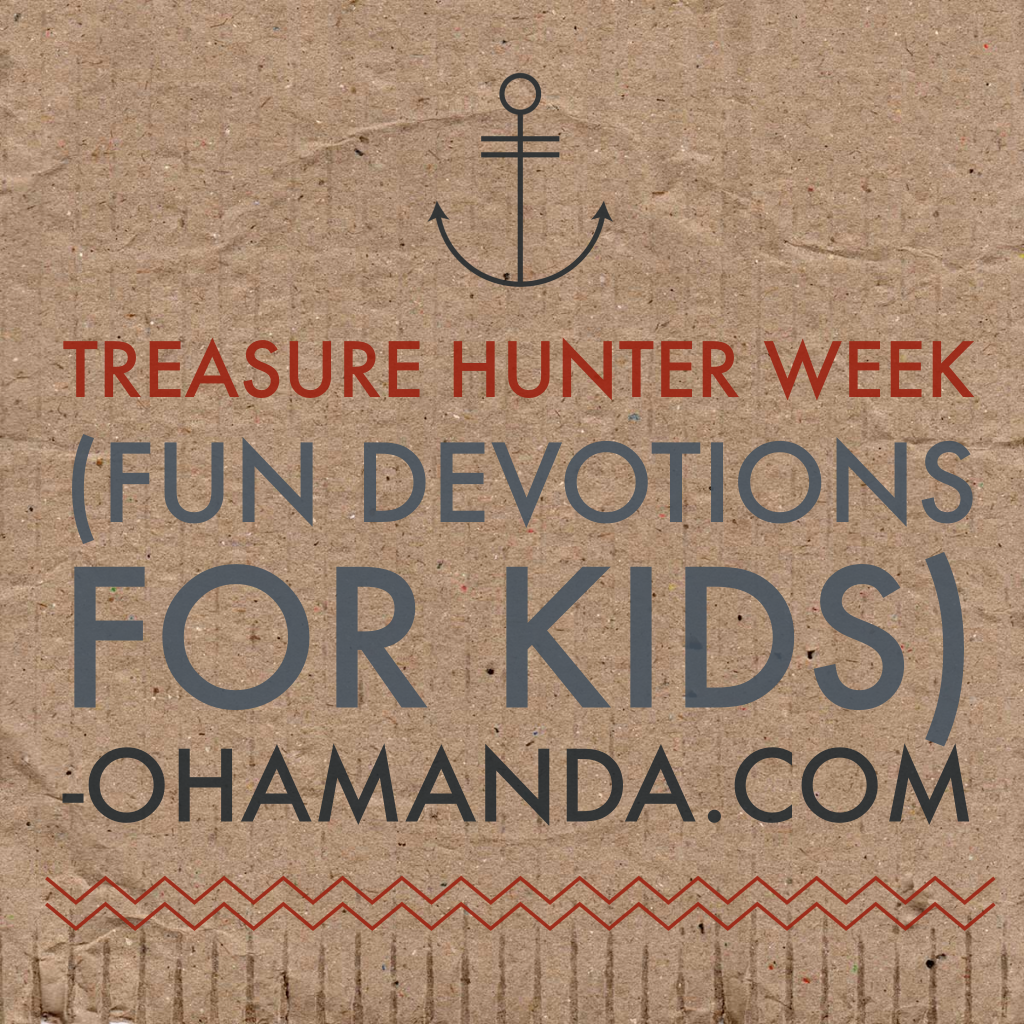 There are lots of treasure symbols and word pictures in the Bible. I didn’t necessarily want it to be about how Asa is a treasure (although he is!) because can I be honest? I think it’s a very overdone theme in Christian children’s books and movies. I wanted Asa to know that God is a treasure and His Word is more precious than rubies.

After dropping off all the kids at camp (we always take a crew of at-risk kids from a nearby apartment complex to camp along with our daughter), I set a box on Asa’s booster seat. He was delighted to find it and even more excited when inside was his own treasure box with lock and key!

Inside the treasure box was a small wooden coin decorated to say TREASURE HUNTER. I explained that all week we were going to add these coins (or gold doubloons) to his treasure chest as we had all our adventures (kinda Jake-and-the-Neverland-Pirates-ish).

Our first adventure was of course, a book. It’s an old book from the thrift store called, The Pearl That Changed a Life. It’s a fictional, rhyming retelling of Matthew 13:45-46. Yes, a story based on two verses. Simply put, a merchant finds a pearl of great value so he sells everything he owns to buy it.

I read Asa the book before bed and then asked him if he’d ever heard that story in the Bible–and then told him we’d read the real version in the morning. When we read the two verses he wasn’t very impressed. Why would someone sell everything for a pearl? As a comfortable American, I think it was hard for him to understand something of such value. What could be possibly be worth selling all his legos, stuffed animals, our home for? It almost boggles the mind.

So, what does have value beyond the price tag on our stuff? The kingdom of heaven.

Now, even to me, as an adult who’s been around the Bible a long time–this is a hard one to understand. What exactly is the kingdom of heaven? Heaven with the pearly gates? Or some spiritual-in-your-heart awareness of goodness while you’re on earth? Or a mind focused on God’s plans?

Sally Lloyd Jones says it best in The Jesus Storybook Bible, “The kingdom of God is wherever God is king.” She retells the story of Matthew  13:44 (just one verse!) about a man who finds a treasure in a field, buries it again, sells everything he has and then buys the field so he can have the treasure. Again, what could be so valuable? How can God’s kingdom, the kingdom of heaven be worth giving up everything for? Selling all your possessions? 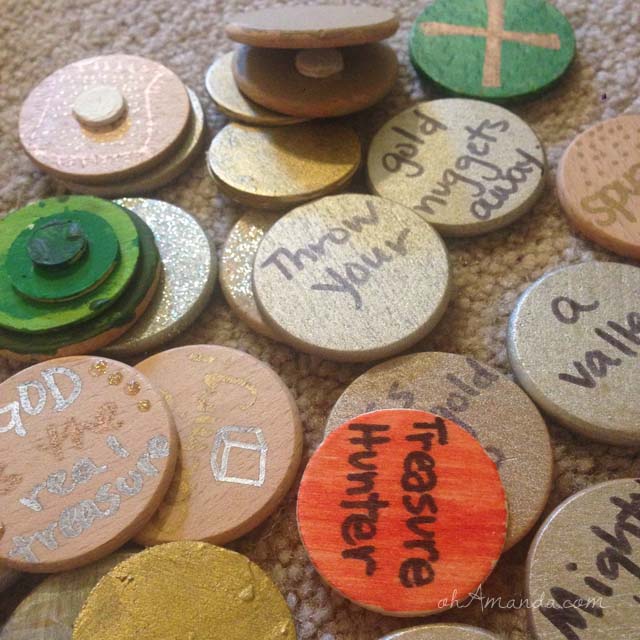 So, we set about making gold doubloons to go with our story. We pulled out our gold sharpies and glittery paint and a glue gun to make our wooden coins a reminder of this simple and huge truth.

Asa absolutely loved decorating these. It was complete free form crafting and I loved seeing what he came up with on each little coin. (100 of these bad boys were only $9–totally worth it!)

We also made gold doubloons that reminded us of our activities–our first of which was geocaching! Now, if you’ve been around here for a few years, you might remember my first interaction with geocaching. If you don’t want to click over and read the story let me just say this: it was pre-smart-phones-with-apps and it did not go well. 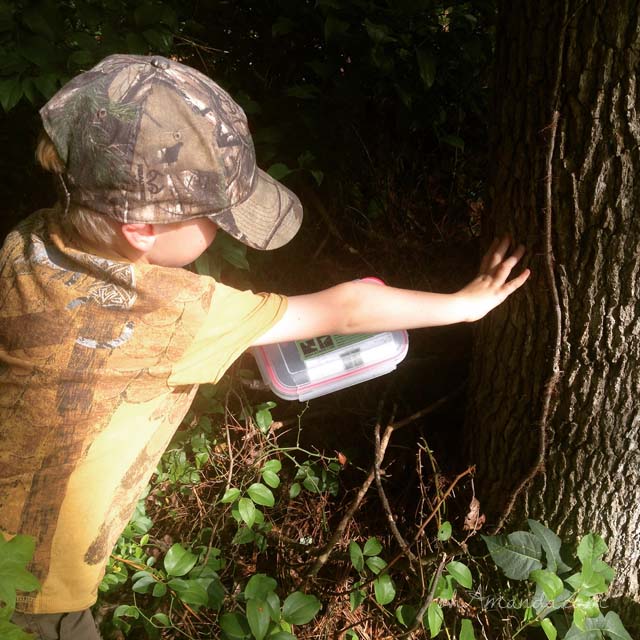 This time, however, we had the time of our lives! 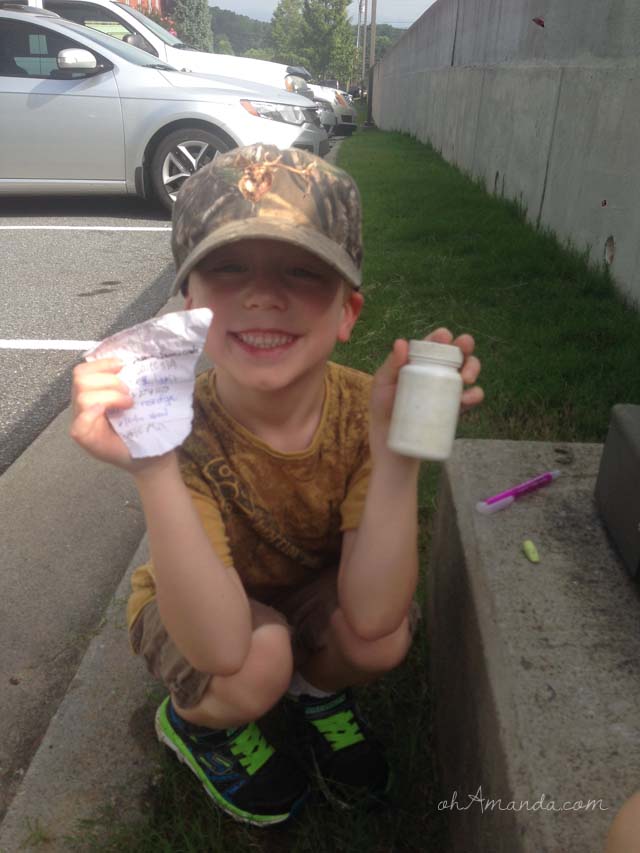 When we found three little treasures hidden within two miles of our house, my Ace felt like a real treasure hunter. Over the next few days, we found about 10 caches!

We also watched Disney’s Treasure Planet which I sincerely liked! I saw it when it came out in theaters, I guess but couldn’t remember most of it.

I thought it was creative and really kinda beautiful. Asa thought it was exciting and there was just so much treasure! It also made for great conversation about what it means to be a “bad guy” or a “good guy”–as it follows the story of Treasure Island and Jim Hawkins’ relationship with the fickle Long John Silver.

My favorite part of our Bible connection was our memory verse. I had a few I liked and read them all to Asa. He picked Job 22:24-25. Mainly because it says “gold nuggets” in it. We paraphrased a bit from the New International Reader’s Version. (I wrote verse 22-23 below! Oops!) 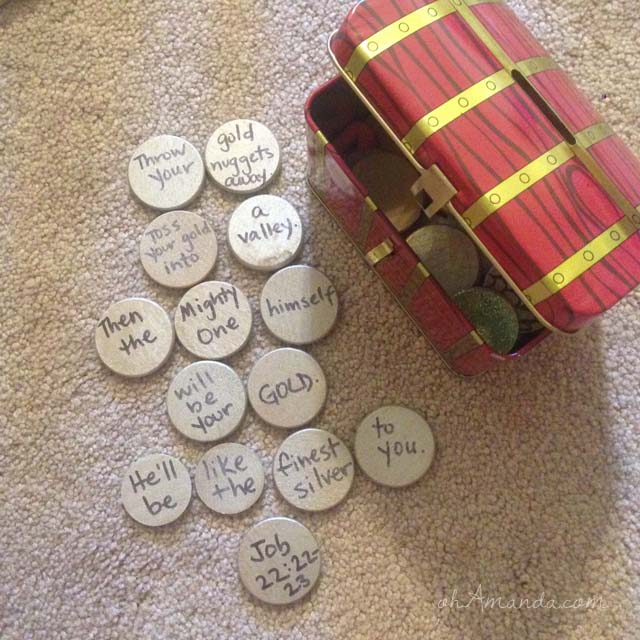 We made up motions and said it in our best pirate voices (ok, I said it in my best pirate voice) and then made gold doubloons to help us remember it. Quoting from Job is always weird because so much of it God laughs at but I think the idea is good–God is a treasure and even gold nuggets are like dirt in comparison to Him!

It was really a very low-key week and not crazy full of crafts and games and activities–but as always, I’m amazed at what a small Bible activity can do for a child’s heart. Many times that week and over the last few weeks, Asa will pick up on a treasure theme from another book or Bible story. His eyes will be wide and he’ll say, “Treasure Hunter!”

As he continues to grow in his relationship with God, I pray he sees God as the ultimate treasure–not himself, his future plan, God’s blessings or even God’s “will”, but God Himself.

UPDATE: Download your own PDF with all these activities and more for your own Treasure Hunter week!