You are here: Home / movies / Pixar’s Inside Out Family Movie Moms Review 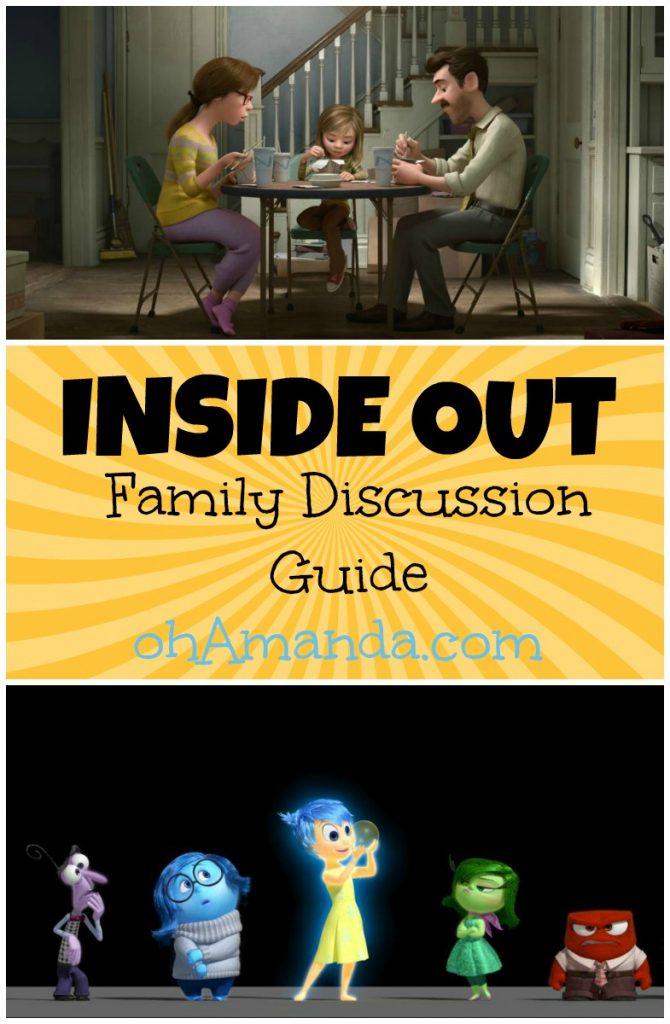 If you haven’t been here for one of my movie reviews you should know that I’m not going to talk about cinematography or acting. I want to help parents discover how they can use movies to bring up eternal conversations with their kids. I also want to help parents know if they should avoid a movie–not because it’s lame but because of themes that hit closer to home like family relationships, worldview, etc. (See my Brave review for more!)

Let’s begin with a mini, spoiler-free synopsis, shall we?

An 11 year old girl named Riley has five emotions in her head–Joy, Anger, Sadness, Fear and Disgust. These emotions navigate her through a life-changing event. Much chaos ensues.

11 year old Riley has super-fun parents who play hockey with her, make jokes and spend lots of time with her. When they decide to move across the country, Riley puts on a brave face but the transition is hard and she eventually takes drastic moves to get her old life back.

Meanwhile, we get a peek into her emotions when we meet Joy, Anger, Sadness, Fear and Disgust—five little emotional characters who man “headquarters” in Riley’s head. They watch what’s going on in Riley’s life and use their special abilities to control and steer Riley’s responses.

When Sadness keeps touching (and permanently changing) the joyful “core memories” in Riley’s memory and eventually dislodges all the awesome core memories that make up who she is, disaster strikes. Joy and Sadness are swept away to the recesses of Riley’s memories while Disgust, Fear and Anger have to navigate Riley through the big move.

Joy and Sadness travel through dream land, imagination and more to get back to headquarters. But it’s harder than they think and of course, learn big lessons along the way.

Now. Let’s talk about what you’re going to want to talk about after you see the movie with your kids. Because if you see this movie and do NOT have conversation about it afterwards, you are missing out on such a big opportunity!

WHAT PARENTS WILL LEARN FROM INSIDE OUT

1. Kids don’t need happy-happy-joy-joy, perfect days every single day of their life. HUGE SPOILER: Joy finally learns that Riley needs Sadness, too. She sees that when there’s sadness, there’s others around to help and comfort. Sadness can often lead to joy.

It is not our job to make our kids happy. It is our job to lead our kids through life so they can be amazing adults. They need to know their car will break down, they might not get the job and they don’t give participation awards in college. We don’t need to snowplow the roads of life for our kids. Let them have sadness, disappointment and rejection.

2. As your kids get older, they do not have to hate you.

Riley is only 11 in this movie but she loves her parents. Her core memories are of amazing times spent with her parents. Everything about who she is on the inside is because of her parents. Be encouraged, moms and dads–your kids need your hugs, they need your kisses goodnight, they need your protection and love no matter how old they are!

WHAT TWEENS WILL LEARN FROM INSIDE OUT 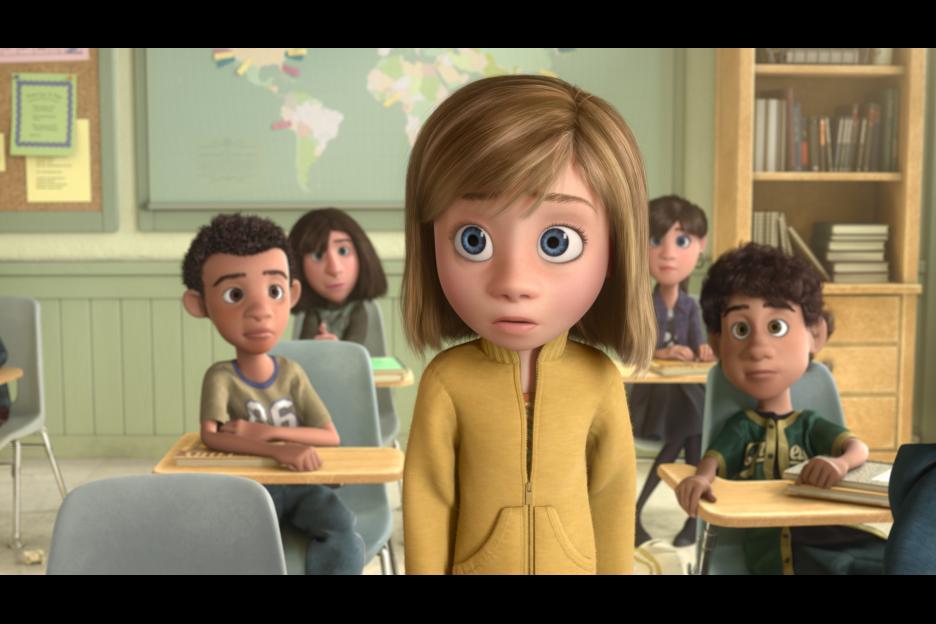 Talk to your tweens about how emotions can change. Explain that as they grow into this new almost-adult season of their life, that inexplicably, an emotion might pop up at the exact wrong time.

Disgust, Fear and Anger were controlling Riley through all her big mistakes during the movie. As tweens, they might feel those emotions rising up in them–but unlike Riley, they can control their emotions. Let your kids know they don’t have to give into being controlled by their emotions. They can choose to lead and act on any emotion–not just the one yelling the loudest.

Read Romans 8:5-6 (or even the whole chapter) and talk about how we can be controlled by the Holy Spirit and not our flesh.

WHAT LITTLE KIDS WILL LEARN FROM INSIDE OUT

Besides the controlling of emotions (which is appropriate to all ages at one level), there’s a really meaningful, long character arc about Riley’s imaginary friend Bing Bong. <<SPOILER ALERT>> As he helps Joy and Sadness get back to Headquarters, he ends up sacrificing himself–leaving Riley’s memory forever. He put Riley’s future happiness before his own desires.

It was one of the most beautiful parts of the story to me. Talk to your kids about how Bing Bong put Riley first even after he’d been ignored and forgotten for years. Ask them to think of a time when someone sacrificed what they wanted for them. Encourage them to put others first even when they really want to do things their own way.

Read Mark 10:44. Talk about choosing to be a servant and slave to others.

1. If you are a parent, this movie will make you cry and want to pull out photo albums of your kids’ first years. (ps: look for some UP scenes hidden in Riley’s memories!)

2. The dream land Joy and Sadness go through had some nightmare related stuff–Riley even has a nightmare at one point. There was a giant clown, dead rats, ghosts, etc. I don’t think it was super scary–more silly. But beware if your kiddos are bothered by nightmares.

3. Anger really wants to use a curse word. (Although, the first time he mentions it he says, “that curse word we know”…meaning they only know one! So innocent.)

4. This movie totally reminded me of my long-lost favorite attraction at Epcot, Cranium Command! Right?!

5. Did you see Wreck-It Ralph? I thought it was one of the most boring Disney movies ever. One reason I didn’t like it is because of the long long journey the two characters had through all those weird candy lands. It was like never ending. Part of Inside Out felt that way, too. The whole time Joy and Sadness were trying to get back to headquarters they were going through all these weird made up places in Riley’s brain and always hitting a dead end. I’m not saying it was boring, just kinda long.

6. The end of the movie (maybe it was the credits, now that I think about it) finally showed everyone’s inner emotions (including cats and dogs!). It was probably the funniest part of the movie and I especially liked the “popular girls” inner thoughts, “Are they paying attention to me? Do they see how much I’m trying?” Her calm, cool and collected exterior did not match her inside. Another great conversation starter–people are not as they appear. And are usually more insecure than they let on.

7. You may have seen the preview where the mom dreams about a long-lost lover…that part really irked me. There was a slight recovery to it at the end but…eh. Wishing someone else was your husband doesn’t make me happy.

8. There was a super cute Hawaiian-volcano-song short but there wasn’t a secret at the end. Just a sweet dedication: “This movie is dedicated to our kids. Don’t grow up. Ever.”

I really did like this movie and as I’ve thought about it over the past few days, it’s grown on me. It’s not as amazing to me as Up or even Frozen. It doesn’t have the epic quality of Tangled or Toy Story. But parts of it are completely heart-squeezingly sweet. The parents-child relationship alone makes it worth watching!

I can see my sensitive 9 year old being a little overwhelmed by all the emotions and thoughts…especially if she relates them to her own thoughts. My funny six year old will like it but it won’t be something he’s going to watch over and over again.

It’s appropriate for all ages but I don’t think it will be adored by all ages. It definitely had an older feel to it. It is about an 11 year old girl and her 11 year old emotions.

Overall, I say THANK YOU Pixar for a movie about how great parents are and how emotions are fickle. Take your kids to see Inside Out and afterwards talk about your family relationships, how much you love your kids and are ready for any and every emotion that comes up in their life!

ps–Check out the Family Movie Moms Podcast where Heather and I talk about Inside Out, Tomorrowland and other fun movies for you and your kiddos!

I attended a screening of Inside Out as a member of the media. All opinions mine. Photos belong to Walt Disney Pictures.