You are here: Home / movies / Tinkerbell & the Legend of the Neverbeast

About once a month, we have movie night at our house. We snuggle on the couch with popcorn (or our new favorite, homemade roasted pecans with butter and salt!) and watch something from our treasure trove of movies. My husband and I collected kids’ movies even before the kids were born. I think the first DVD we ever owned was a Toy Story/Toy Story 2 combo set!

Two of our last movie nights we kicked it old school and watched Swiss Family Robinson (which the kids loved–and I thought was hilarious because of the animals. They would never do all those animal stunts today!) and An American Tail (which they also loved and I fell in love with Fievel’s little voice all over again!). Our latest movie night was the newest Tinkerbell movie, Tinkerbell and the Legend of the Neverbeast! 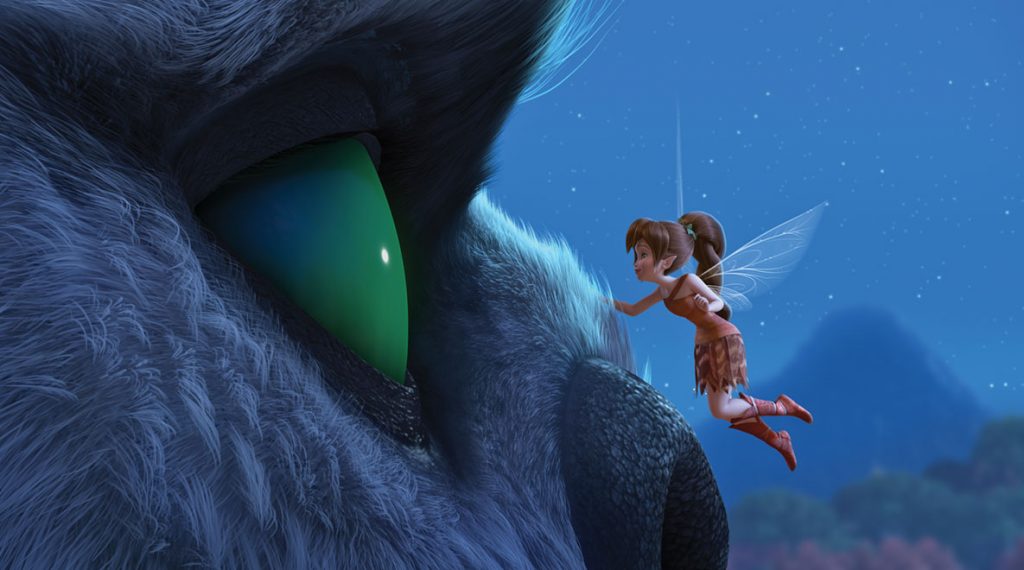 If you’ve been around here for any amount of time you know we are big fans of this Disney Fairies franchise. The fairies are basically modest in their attire, the big problems in the story are more about normal (fairy) life and less about a scary evil wizard, themes of friendship and working together always top the list. Plus, the stories are legitimately interesting. I genuinely like watching them!

Fawn, an animal talent fairy has a knack for attracting and loving some not-very cuddly animals. When she discovers a giant beast in the woods who is building some tall rock towers, she is enthralled and goes about trying to learn its ways and become it’s friend.

In the end, the Scout Fairies capture the beast which stops him from his mission of building towers to attract lightning, which seems like a good thing until Fawn realizes he is capturing the lightning to save Pixie Hollow, not destroy it. With Fawn and Tinkerbell’s help, they release the Neverbeast and save Pixie Hollow.

And now, a discussion guide…

1. Fawn deliberately keeps the Neverbeast (Gruff) a secret from the Scout Fairies. She knew Gruff was nicer than the Scout Fairies believed, but is it the best idea to keep something potentially dangerous a secret?

Read Ecclesiastes 9:4-12. If Fawn had worked together with the Scouts, how would the story have turned out differently?

2. Gruff looks like a big scary monster. Instead, he turned out to be a protector of the fairies and of Neverland.

Read 1 Samuel 16:7. Does it matter to God what we look like on the outside?

3. Every few thousand years, the green comet fell to Neverland and woke up the Neverbeast. It was Gruff’s one job to build the rock towers and collect the lightning to save Pixie Hollow.

Read Ephesians 2:10. God prepared good works for us to do. It might not be saving an entire land like Gruff, but it could be doing something really special for Him in our school, our home or community. How can you follow God and His plans for you?

Read James 1:5. What should you do next time you are unsure of the right choice?

This wasn’t my favorite of the Tinkerbell franchises. (I like Secret of the Wings best, with the Pirate Fairy a close second!) For one thing, Tink was a side character at best. So, the title is misleading. I really like when Tink and her friends are all central to the storyline. Periwinkle didn’t show up at all. And no Clank and Bobble!

Plus, Fawn went from wearing her uniform of pants and braid to a skirt and beach waves ponytail. What’s up with that?

This one was also the scariest because of all the lightning and the green storm. It was kinda creepy. It ended up being OK and not evil, just a weird Neverland fluke, but I can see little kids not liking it.

Overall, the kids super loved it and we had fun watching it. They kinda fell in love with the ferocious/adorable Neverbeast and said they wanted him as a stuffed animal. Ew. Next time you’re Netflixing, sit down with this fun movie!

{And don’t forget, Easter is in less than 3 weeks! Have you started A Sense of the Resurrection yet?}

I was given a copy of the Neverbeast movie to facilitate a review. Words and opinions mine. Affiliate links included. When you purchase anything via these links, I make a small commission. Very small. But very appreciated. Thanks for loving ohAmanda!