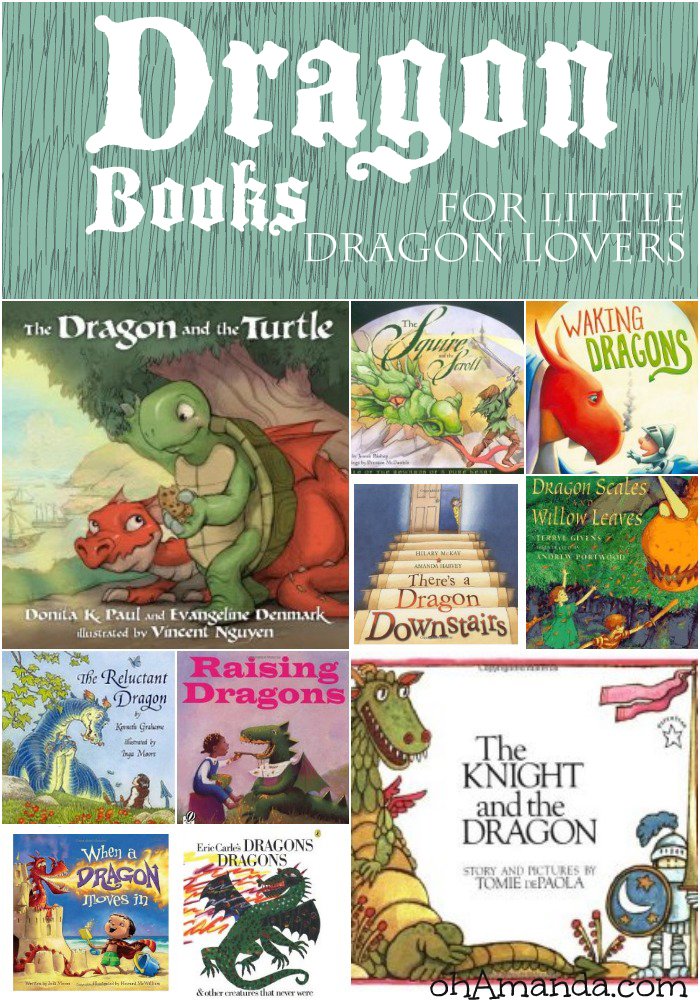 One of my favorite parts of Dragon Week was the books! Oh, the books! We spent several hours at the library hunting for any and all dragon books. I taught Asa how to search by author and the Dewey Decimal system (ok, I may be a bit rusty at that part) and we had so much fun reading and reading and reading when we got home.

Here’s all the books we read for Dragon Week. The good, the bad and the scaly…

Oh, how cute is this one?! It’s about a little boy who has to wake his dragons before he goes to Knight School. A fun little picture book with silly dragon illustrations (eating waffles with a catapult, anyone?) and Asa loved it.

This is a very odd book about a little girl dragon who doesn’t like it that her dad “smokes” because it makes his teeth yellow and is bad for him. Get it? Like smoking actual cigarettes? We didn’t make it past the first page of this one…

The Reluctant Dragon by Kenneth Grahame illustrated by Inga Moore

Goodness, how have I never read this before?! It was written in 1898 by Kenneth Grahame who also wrote Wind in the Willows. It’s a lovely story of a little boy who makes friends with a friendly reluctant dragon. When the town sends in Saint George to kill the dragon, it’s up to the little boy to hatch a plan to keep the dragon safe and Saint George a hero! This is a long story (abridged and illustrated by Inga Moore) but Asa and I loved it! It’s one I’d like to own!

The illustrations don’t look like much but this was our surprise favorite of the day. A little girl discovers a dragon egg on her father’s farm and enjoys raising it along with the other farm animals. Soon, she has to send it away, back to Dragon island but her dragon friend thanks her by sending her more eggs to raise!

This isn’t a story of dragons, but beautiful art by Eric Carle of mythological creatures paired with famous poems about each one. Asa was enthralled with this one. It had some really cool creatures–and then a few from mystical religions, so you can skip those if you want.

I didn’t love this book but Asa thought it was hysterical. It’s about a mean old dragon-librarian who won’t let the kids touch any of the library books. A brave little girl begins reading a book outloud and the mean old librarian drops her scales and becomes a friendly human again. There were lots of dragon puns throughout so it was fun–but the illustrations left me not very excited about it. 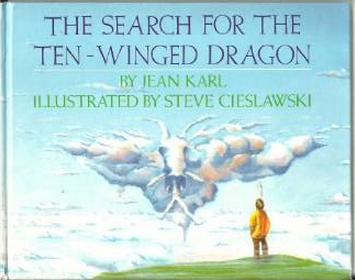 The Search for the Ten-Winged Dragon

This is one of those books where it’s almost like I wonder if it’s really a kids’ book or just some kind of strange folk tale that happened to get published. A little boy wants to be a toymaker but his mentor says he must find the ten-winged dragon before he can do so. The little boy goes on a journey to find this beast and is discourged when he can’t find one. Just before his quest ends, he begins to see ten-winged dragons everywhere–in clouds, in water, etc. It’s a story about imagination and discovery. But it was also kinda weird. And it was illustrated in 1990, so…

I thought this would be the typical kid-is-scared-of-dragon-shadow-at-night-but-it’s-actually-his-closet-door-shadow-in-the-morning. But it turned out to be a little more than that. It was a fun story that ended in a little surprise cat instead of a scary dragon. We liked this one a lot.

This isn’t really a story about dragons or willow leaves. Really, it’s the story of a little boy who sees adventure everywhere–dragon scales in the willow leaves, vikings in the corn fields and pirates in the ponds. I loved it because it’s just exactly my Ace–imaginaing and playing any and everywhere.

Over at the Castle

This is a cute little book set to the tune of “Over in the Meadow” but as I don’t know that song, I had to read it and probably missed some of the fun. But the illustrations are cute–all the inhabitatns of a castle and surrounding area are unaware of a dragon and it’s mother waiting for the perfect time to attack them….with fireworks. I’d actually like to read the companion, Hush, Little Dragon

which is to the tune of Hush, Little Baby.

Dragon in a Wagon

Another book that isn’t about a dragon. It’s really just rhymes about animals. But it had some creative illustrations (a moose on the loose, a shark in the dark) and Asa thought it was funny.

OK. At first I thought I was going to love this one. It’s about a little boy who discovers he has dragons at his house. Dragons that only he can see. And as you continue reading, you discover these dragons are really his fears. These fears never leave him, they pop out at him at the worst times and he can’t stop thinking about them. It’s a book to read to your scared, anxious and fearful kids. But I just didn’t like the ending. It was like, “acknowledge your dragons everyday” and “name your dragon” and then one day they’ll just disappear. It’s just not my view of fear, so I didn’t like it much. Asa didn’t get it, so it didn’t matter anyway.

When a Dragon Moves In

This was another fun surprise. This one has the feel of How I Became a Pirate. It’s about a little boy who has a dragon move into his sandcastle. The illustrations are modern and have some fun stories hidden in them. We really liked this one!

I’m not sure if I liked this one or not. It’s about a little boy, Max who sees a dragon in the sky. His brothers disagree, then later play along and imagine with him. It’s also kinda about weather and rhymes and wishes. I dunno. I liked it. But it was kinda weird, too.

A sweet little book about a baby dragon who doesn’t obey when his mother tells him to wait by the red fern. It’s perfect for conversations about trusting your parents even when you don’t understand.

The Knight and the Dragon

Oh, I love Tomie dePaola! This one is about a newbie knight and a newbie dragon who discover that fighting each other isn’t their best idea yet. It’s got funny illustrations and a surprise silly ending!

The Dragon and the Turtle

and The Dragon and the Turtle Go on Safari

I’ve written about these books before. I so super love Donita K Paul’s Young Adult series, Dragon Keepers Chronicles but these books are either a little too creative or not creative enough. Asa loves the illustrations but the stories are a little slow and hard to follow. I want to love them because they are based on Scripture and have some fun parent-connection ideas in the back. But they still aren’t my favorite to read.

The Squire and the Scroll

We actually didn’t read this one. I only remembered it halfway through Dragon Week and we just never got to it. But we have read it before–it’s got a Pilgrim’s Progress feel to it and a squire learns how to fight a dragon and keep himself pure by following the scroll explicitly. It’s on his bookshelf and we’ll read it soon!

Do you have a fun dragon book to share?