You are here: Home / Kids Crafts / Why I’m Not a Craft Blogger

You know, when I first started blogging my craft-y adventures with my kids, I thought my blog might turn into a craft blog. That I might be able to hang with Make and Takes or Inner Child Fun.

Alas, I have discovered that really, I’m just a crafty wannabe. I love all the Pinterest-worthy, etsy-licious stuff online but my follow-through isn’t that great. My craft style is more like find-something-cute-realize-you-don’t-have-all-the-supplies-try-it-anyway-and-shrug-when-it-doesn’t-really-work-but-at-least-you-had-fun-with-the-kids.

And with that, I’d like to show you the dragon craft Asa and I made for Dragon week! (Aren’t you excited?!)

All you need is a paper or plastic cup, some duct tape (preferably dragon colored), puff balls, wiggly eyes, some extra dragon decorations (we used green sparkly foam) and ric rac (we’ll talk more about that in a minute)… 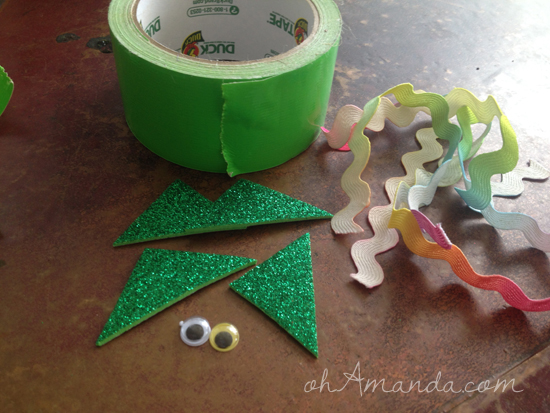 (See? I forgot to put the cup and the puffballs in the picture! Not a good craft blogger…)

Cover your cup with duct tape. It doesn’t have to be pretty. In fact, the more knobby and wrinkled it is, the better! 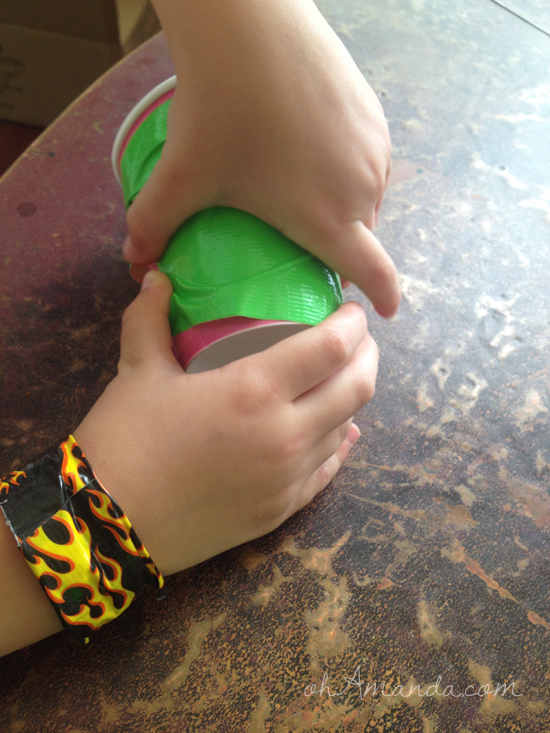 Next, glue the puffballs on top, add wiggly eyes and you have a dragon head!

Now. Cut a hole in the bottom of the cup. (We did a little hole, but you could cut the whole bottom off, too.) Why? Because you are going to put this dragon to your mouth and blow fire out of the dragon’s mouth!

For the fire we used rainbow colored ric rac (left over from Lydia’s American Girl Doll party) and when Asa put his mouth on the cup to blow—NOTHING happened.

I think the ric rac was too heavy. The original version I saw on Pinterest used streamers and I think that would work better. But after I had already stapled the ric rac to to a cup covered in duct tape? That was all we were gonna do.

I told Asa to just pretend there was fire instead. He liked it anyway. (So much so he won’t let me throw that thing away–it’s still sitting on his dresser!)

So, there you go. If you make this craft, you might wanna follow the original instructions or search your craft closet for some lighter ribbon to make your own fire-breathing dragon! (See why I’m not a craft blogger?!)

Don’t forget to check out my Dragon Week Pinterest board with all kinds of other (better) dragon crafts, books and a few other raising Knights kinda posts, too. I think you’ll dig it.