This morning I woke up at 6:25. I’ve been trying to get up at 6:00. When I fail as miserably as 25 minutes, it makes me want to just close my eyes and stay in the bed. Which is exactly what I did. I said to myself, “I’ll get up when Les gets Asa up.” That would give me 10 or so more minutes in the bed.

Well, when Les got Asa, he was upstairs for about 10 minutes and I fell asleep.

The next thing I know Les and Asa are in the room and Asa wants to snuggle in my arms. Well, who can pass that up? He’d lean his cheek against my lips for a kiss, he was singing Barbara Manatee, he rubbed my face with his hands, he smacked his lips together to make popping noises. Then my favorite–he grabbed my hair and rubbed it. When Asa is very tired he reaches up and rubs the hair on the top of his head. It’s one of those adorable little boy things that I love to see. When he reached up to rub my hair, it was like we were one little person. Like I was in on the secret of sleeping-like-Asa. 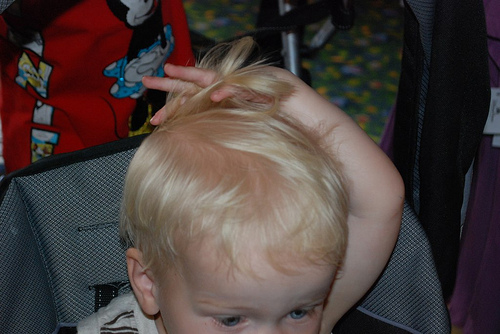 When we were at Disney World in September, he never ever ever fell asleep in the stroller. (SERIOUSLY.) But he rubbed his hair nonstop. It was constant position. The poor little guy was exhausted and his only source of rest was to rub his hair. It’s the cutest thing ever. (Is it bad that I can’t wait to see if he rubs his hair as a teenager?)

So, my #hellomornings did not go well and I’m still sitting in my pajamas with a birthday-party to do list ten miles long. But I didn’t want to forget about the morning Asa rubbed my hair. Just one of those random mommy things I want to tuck away and treasure.