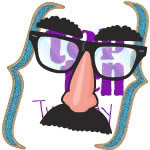 Here it is–the post you’ve all been waiting for. I am finally coming clean on yesterday’s Top Ten {Tuesday} post. Here are the ACTUAL WEIRD THINGS THAT HAPPENED TO ME THIS WEEK:

1. Made a date with my aunt to CAN TOMATOES.

It’s hard to believe but yes, my aunt and I are going to can tomatoes. Well, if any ever grow on our tomato plants. We were talking about Animal, Vegetable, Miracle and somehow got onto canning. She said she and her friend have done some canning. So, I told her I want her to teach me. There you go: TRUTH.

2. Stepped on a BINDER CLIP at the pool and sliced the bottom of my foot open.

We didn’t realize Asa didn’t have any swim diapers until I had already slathered him with sunblock. Les ran to the store and when he came back with Tigger & Pooh swim diapers (instead of the Dora ones poor Asa had been using before), I began to wrestle Asa into the diaper. He was totally distraught because he thought I was taking his suit OFF. I had to move over to one of the long lounge chairs and next thing I know I step on a binder clip. (Who brings a binder clip to the pool?!) I now have a cowboy hat-shaped chunk out of the bottom of my foot and it hurts like the dickens. TRUTH.

3. Went swimming with FOUR GUYS I WENT TO HIGH SCHOOL with.

My sisterchick, Mandi married a guy from my High School homeroom. He also went to my church but I met him at school first. We didn’t have the same friends in High School but like me, he’s kept the same friends since then. So, when Mandi throws a party for her kids, guess who shows up? His friends. So, this weekend, the only guests in attendance at the birthday party were me, some family friends and 4 guys I went to High School with. When you’re in High School you never think you’re going to be at a pool party watching these guys swim with their kids or lounge by the pool with their wife. It’s quite the perspective. So. TRUTH.

Every Sunday my husband and I lead 7 classrooms of 4 year olds in singing songs at church. I had 27 kids in 2 of my classes. But let’s just say there were 20 in each. That’s actually 140 4 year olds. It’s loud. But very fun. TRUTH.

5. Cooked dinner for nine of my IN-LAWS.

6. Missed a meeting because my husband took my kids AND MY CELL PHONE AND CAR KEYS out to dinner.

Ridiculous. Frustrating. This is TRUTH.

7. Discovered ON FACEBOOK that my cousin got married this week.

She was originally going to be engaged for 3 years. But obviously, that’s way too long. So, she and her fiance decided to just get married. They live in California and I guess it was a last minute thing. She was gorgeous. Stunning. That’s just how my family rolls. TRUTH.

8. Accidentally stabbed myself with 2 bamboo skewers. IN MY ELBOW.

I have a whole jar of bamboo skewers left over from my fruit kabobs. I was reaching up to put something on a top shelf. When I brought my arm down, I went right into the skewers, knocking them over. Except for 2 skewers that stuck straight into my elbow! They were hanging out of my arm and I had to PULL THEM OUT. I was bleeding out of two little holes like I had been struck by a snake. It still hurts. Shockingly, this is TRUTH.

I can’t believe how many of you suggested that this one was false. You know I’ve been walking every day for months now. How do you know I haven’t been wunning? Or even jogging? I may have just gotten a crazy hair one day to run my whole route and then fall breathless back into the bed. Mandi and Amy were brutal in their lack of faith. Teri must be a lawyer because she agreed with them and even used my own blog against me! Alas. You were right. I’m not a runner. This statement is FALSE.

10. Figured out the amazingness that is POKE on Facebook.

In case you can’t tell we’re POKE-ing each other between comments. So. Truth? Well, it may have been an exaggeration. It’s not quite amazing in it’s awesomeness. But it is amazing in it’s total weirdness. {Also, since then I’ve had about 3 other people POKE me. They can’t stop the POKE.}

Thanks for playing my game. I was laughing so hard at the comments! You guys made Tuesday fun! Mwuah! (<—that was supposed to be a big kiss.)