You are here: Home / me / I Have a Confession To Make 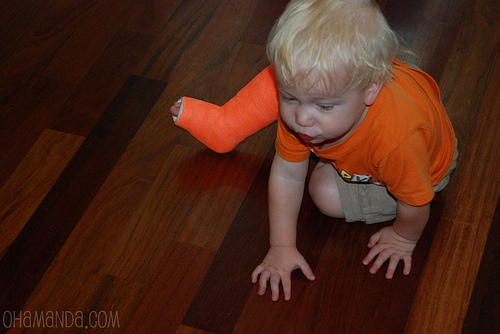 Asa is halfway through his cast-wearing adventure. He’s got crawling and scooting down pat. He’s only mentioned the possibility of getting the cast off twice. And he still says he doesn’t like his doctors.

But the whole reason he has a broken leg is not because I let an almost 2 year old go down Chick-fil-a’s slide. It’s because I let him go down the slide WITH HIS SHOES ON. Yup. He was wearing Crocs with no socks. And when I saw the dirty floor, I thought, “Ugh. He can just wear his shoes. No big deal.” Yeah, I know they have the cubbies for your shoes. I know there was a big sign that said “NO SHOES”. But, the floor was dirty. So, the Crocs stayed on. He only went down the slide twice. The first time, Lydia took him in her lap. He laughed and laughed, even though his slowed him down. The second time he came down right in front of Lydia and his little leg was stuck under him AND Lydia.

I promise I’m not beating myself up about it. But I can remember the exact moment I thought of keeping his shoes on. I wish I had just been obedient to the rules of the playplace and let him go shoeless—even if he did get dirty.

I just glanced through google (or rather swagbucks search) to see what was written about fast-food playground injuries. I found lots of things that made sick to my stomach. Like a 2009 article that said 200,000 children are treated at the ER for playground related injuries every year. There was even an incident of brain injury because a boy fell at a play place.

But the most sobering news was that 40% of injuries* are because lack of parent supervision. If you hang out at fast food restaurant playgrounds you know what I’m talking about. It’s not the parents that can’t see way up top in the tunnel. It’s the parents that are eating in another side of the restaurant while their child plays. (I know because this happened to me a few weeks ago. I was the only parent in the enclosed room with 12 kids.)

I think it boils down to integrity. Or lack there of. Parents don’t obey the “no shoes” rule or the “for children under 42 inches” or the “no unspervised children” rule. Then they wonder why their own children don’t obey the rules at school and home!

This is not an investigative report. I’m not trying to prove anything or scare you. I’m just reminding you (and me) to obey the rules, be an example and TAKE OFF YOUR KIDS SHOES AT CHICK-FIL-A!

*I promise I read that statistic but I cannot find the article again!

❮ ❮ How To Have The Best Cousin/Grandkid Camp EVER
How To Cut Letters, Make Your Own Stickers & Fingerpaint with Preschoolers (*whew*) ❯ ❯