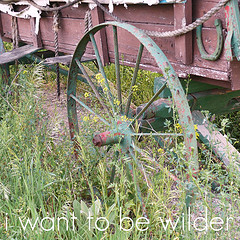 When I was a little girl, I read the Little House books by Laura Ingalls Wilder. I loved every second of  the stories and was excited to read them to Lydia. We read the first two books last year and after one of you suggested the audio versions read by Cherry Jones (that’s President Taylor for all you 24 fans), I picked up the 3rd book, Farmer Boy at the library. I wasn’t sure if Lydia would like it since it’s about…a boy–but my fears were unfounded. It is probably our favorite audiobook so far! My husband was even excited to listen to it. We would talk about the story over dinner and I’d think about it while cleaning or cooking. We kept the CDs in the car and I’d dream up places we needed to go just so we could listen to more of the story!

Farmer Boy is the story of Laura’s husband, Almanzo Wilder when he was a boy on his family’s farm in New York. It’s almost a documentary (if books can be documentaries) there is so much detail. It follows Almanzo through an entire year on the farm—the cold winter where they have to get up in the middle of the night to make sure the cows move and do not froze, the spring where they plant carrots, potatoes and grain; the summer when they raise pigs and pick berries; the fall is for harvesting pumpkins, hay and apples.

With every new season I was dumbfounded at the amount of work they did—they made candles to last an entire year, they butchered pigs and didn’t waste one piece, they sheared sheep so Mrs. Wilder could use it to make fabric, which she dyed herself. She even wove her own carpet for their parlor! They made shingles for roofs, cut ice blocks from the frozen lakes and raised every bit of food they would eat for the entire year.

The book begins with Almanzo’s 9th birthday. There was no special party, not even a special feast or a birthday cake. There was no special gathering or opening up birthday presents from all his friends. In fact, the only present he got was a yoke. A yoke. Like a piece of wood you put around two animals’ necks. He got this yoke so he could break and train his two young calves, Star and Bright. FOR HIS 9th BIRTHDAY. And when he saw the yoke, he was so happy. He was honored his father thought him old enough and mature enough to break the calves. He was excited to start WORKING with them!

The more we listened to the book, the more I felt like my family and I were missing out on something. I’m not remotely suggesting I want to buy a farm, start weaving my own carpet and making my own candles in lieu of electricity. But I do want to do something hard. I want to work. I want to see my children get excited about doing something that has a greater result than entertainment. I want them to love being a part of our family because we make things happen, we work together to do big things.

I know this whole “hard things” is not new—I’ve posted about it a few times. I was listening to Farmer Boy at the same time I was reading Start Here by the Harris brothers. With those two combined, I actually felt convicted. Like I wasn’t doing something I was supposed to be doing. I sat down at the computer and wrote a title for a post: I Want To Be Wilder. But I couldn’t actually write anything about it yet. It’s been sitting in my drafts folder for 3 months. It’s a pun on Laura & Almanzo’s name but it also shows the way I feel. I feel like I’m a sleeping person. I feel drugged and lame and as if I’ve been living under water my whole life. And I don’t want to any more.

I walk around grocery stores and see people yelling at their kids while filling their cart with whatever the kid just demanded. I watch television and see immorality touted as normal and admirable. I read blogs and websites that focus on events and stories and products that are frankly, pointless.

And I am one of those people: I pamper my kids, I entertain myself with immorality, I focus on finite and meaningless stuff.

If you’re looking for the punchline, I have none. I have no big plans to announce that I’m homeschooling my kids on a farm, or selling my house to move to Africa or anything like that. I told you a few weeks ago, that right now my hard things are scrubbing the dishes before I put them in the dishwasher and getting up at 6am before my kids. But I can see day by day and week by week that I’m feeling new “hard things” come into my life. I’m sensing the ability and desire to do things that from my previous mindset would be WILD.

The next few weeks I’m going to share a series of posts based on the things that have been changing in my heart and life. This is not going to be a series with homework for you. I’m not suggesting this is a path to emulate. I’m not equating Laura Ingalls to God or suggesting that we all need to live like it’s the 1800’s. I’m just ready to share my journey with you. And possibly inspire you to wake up and get a little wilder, too.

See the whole I WANT TO BE WILDER series:

Part 1: Believing the Best About Your Kids
Part 2: Serving Others
Part 3: The Choice of Freedom
Part 4: Putting Off A Hard Thing