You are here: Home / me / Parenting One on One with Children 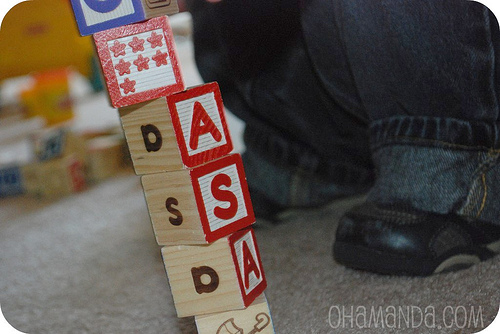 Lydia spent the night with my parents last night. I dropped her off at my mom’s church and Lydia happily waved good-bye. She was thrilled to be caught up in my parent’s schedule and their lives. Asa was amiable enough until I took Lydia’s carseat out the car. Then he started wailing. He loves his sister!

We drove to meet Les at a new Italian restaurant by our house. (And do you know that eating out does wonders for a clean kitchen?!) While we waited for Les to arrive, Asa was his cutest self. He waved and flirted with the waitress. He pointed out the fans, the decorations, the candle on the table and the fountain outside. He was having such a fun time. And I felt sad that if Lydia had been there, I may not have noticed his adorableness.

This morning Asa woke up about an hour early. He wasn’t crying, just laying in his bed calling all our names. I got up and went for my walk (FIVE DAYS IN A ROW!!) and when I came back Asa and my husband were snuggling in the bed. I had to curl up next to them and I rubbed Asa’s sweet face till I dragged myself out of bed for the second time to take a shower. (Note to self: do not go back to bed!)

This morning Asa and I have been cooking pancakes, watching Sesame Street and generally enjoying each other’s company. Right now he’s quietly reading books to himself. Although, this is one of his favorite activities, if Lydia had been here, they would have been running all over the house or we would have moved on to something more productive.

But as I stood in the kitchen flipping pancakes and listening my little guy patter around and read to himself, I felt so…wistful. My son is a unique being. He’s not just my second. He’s not just Lydia’s little brother. He’s Asa. Every bit as sparkling and dynamic as his big sister. I don’t mean to say I ignore him when the two of them are together (believe me, the chid is attached to my hip) but I don’t always get to experience him so singularly.

Maria Bailey once told me the best gift I could ever give my child is a sibling. And I see that to be true every single day. I am jealous for the love and laughter my children share together. But some days it’s a gift and a breath of fresh air to spend some one on one time with them. I want to know my children, their hearts and their desires. And today, I’m going to learn something new about my son. My beloved son, in whom I am well pleased.