All week I’ve had a tab open to the new (in)courage blog. I love the idea of this new community—a group of women bloggers who write to encourage other women in their relationship with God. The description from the front page gives me a yummy sisterchick-feeling inside: it’s like a “beach house–you can put your sandy dirty feet on the coffee table, help yourself to whatever’s in the fridge, laugh late into the night with friends and hear God’s voice more clearly than perhaps anywhere else“. Isn’t that just cozy? I love it.

To kick off their new blog, (in)courage is inviting everyone to share what encourages them. It’s funny because this week I was planning on re-publishing some of my favorite posts–things I wrote that show when I heard God’s voice clearly and saw Him move in real ways. It encourages me to hear stories of God’s interaction in the lives of real people. So, here is my first story; my miracle. Be (in)couraged… 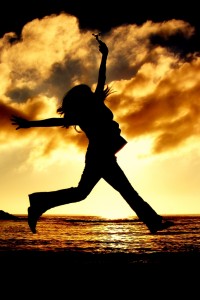 I’m sharing this story with trepidation. I have met so many moms who have had miscarriages or moms who are afraid to announce they are pregnant for fear of miscarriage. I don’t want my story to sound self-serving or prideful. This story only affirms my utter dependence upon God, my Father.

When I found out I was pregnant, I was beyond excited. We had purposely waited for 7 years to get pregnant and it was just the perfect time in our life. At my first ob appointment (about 8 weeks pregnant) my parents were in town and we all loaded up to see the doctor and see that little baby heartbeat on the ultrasound.

I just remember being nervous–a surreal fluttery nervousness. I laid on the table with my family circled around me, the tech rubbed that yucky (freezing) jelly on my abdomen and then began to look for our baby. She kept moving it around saying things like, “Hmm….where is that thing? Gosh, you sure are skinny!” Finally, she shooed my family out and did a vaginal ultrasound (gag!). When we were alone in that room and she was looking for my little baby, I got the first inkling…no rush of protectiveness for my unborn child. Finally, the tech said, “I see the sac, but no heartbeat.” I think my stomach, my heart and my mind dropped. She called my family back in and showed them the ultrasound, everyone was just silent. I don’t remember making my way back to the ob/gyn doctor, but somehow she told me that I needed to come back for the next two days to check my horomone levels, then on that 2nd day do an ultrasound, just in case. If my levels weren’t up to where they should and/or they didn’t hear a heartbeat, then they would do a D&C. She told me not to eat breakfast on that day, in case I had to have “surgery”. Meaning, in case we have to scrape your baby out of your body.

I remember we went straight to lunch after that at Jason’s Deli. It was May, so it was warm and we sat outside. I felt like I was fragile. Or like I was made of something fragile. My body just felt different. When you know that you could potentially have a dead body inside of you, and that dead body could be your very own baby, it’s surreal. The four of us talked about the possibility of miscarriage, but we tried to be hopeful that my horomone levels would go back up.

The next day I had a wedding rehearsal dinner for our favorite people in the world, the Lombards. We call them our psuedo-family. When we pulled into the parking lot, the nurse called and said my hormone levels had gone up a tiny bit but not enough to show I was pregnant. It was horrible to be at such a celebration and be thinking about death. I was scheduled for a ultrasound 7:30 the next morning. She told me again to not eat breakfast in case of the D&C.

I just remembered, I was the “wedding coordinator” for the wedding. Really, I just kept the family walking in at the right time! Anyway, after the rehearsal, the amazing dinner and an amazing time of encouraging and sharing dreams and prayers for the new couple, the whole Lombard family (all 8 of them!) stood outside in the parking lot and prayed for our baby. Having them with us, strengthened our faith.

Before we went home, we remembered we had a list of scriptures about healing at our office. We decided to read every single one of those scriptures over our baby that night. I remember I was laying on the bed and Les was standing in the bathroom when I started reading out loud. The second scripture was Exodus 23:25-26, “ Worship the LORD your God, and his blessing will be on your food and water. I will take away sickness from among you, and none will miscarry or be barren in your land. I will give you a full life span. ” That phrase “none will miscarry” leaped off the page into my heart! I knew that’s what God was promising us–none will miscarry! I read the rest of the scriptures including Romans 4:19 which talks about 100 year old Abraham believing that his 99 year old wife, Sara would have a baby, “Without weakening in his [Abraham’s] faith, he faced the fact that his body was as good as dead—since he was about a hundred years old—and that Sarah’s womb was also dead. Yet he did not waver through unbelief regarding the promise of God, but was strengthened in his faith and gave glory to God, being fully persuaded that God had power to do what he had promised.”

These 2 scriptures together gave me this undeniable faith and assurance that God would keep his promise to me and I would NOT miscarry. That night, I didn’t really sleep; I dreamed prayers. I dreamed those scriptures. I can’t explain it, all I know is that I had my mind set. I was not going to be deterred.

When we got up the next morning, I ate breakfast. I ate it as an act of defiance to the devil, the doctors, the world or whatever it was that would take my baby from me. On the way to the hospital, we were sitting at a red light. One light away from the entrance and I threw up all over the car. My first morning sickness! Again, proof to me that my baby was alive.

When we got into the hospital, the women’s ultrasound office was closed, so we went to the general ultrasound waiting room. We ended up waiting for a full hour. During that time I refused to pick up a magazine or watch television. My husband and I kept our minds focused on God’s promises to us.

Finally they called us in and said, “Did they tell you to drink 32 oz of water?” I almost laughed–32 oz? So, they made me drink 32 oz of water. It was ice water and I got so cold I was shivering. They had to bring me a blanket. Thirty minutes and 3 vomits later, I had all the water in me I was going to get.

At long last they led me into the ultrasound room. It was dark and the tech was so nice. She told me she had a brand new machine and was very glad to use it. Les was standing in the back facing the monitor. She put the instrument inside of me, looked around for less than a minute and then we heard it…the heartbeat. A tear slid down my face and my husband said, “Praise the Lord.” I think we both laughed then. According to the tech’s measurements, our baby was 6 weeks and 6 days old. Our baby was alive! Lydia was born into this world January 5, 2006 at 9:31am…and is right now sleeping like a normal 14 month old in her crib!

A baby’s heart typically starts to beat between 4 & 5 weeks. You can’t really hear it until around 8 weeks, hence the ultrasound at 8 weeks. So, it is possible that Lydia was too young and we couldn’t hear her heartbeat. Or maybe the new machine was better than the woman’s center machine. It doesn’t matter–it was still a miracle. If my appointment had been one day earlier Lydia would have been dead. If the women’s center had been open, Lydia would have been dead.

I personally think Lydia was dead. I believe that when Les and I stood in the authority that God gave us through His Word, the Bible, God brought Lydia back to life. I believe with all my heart that God’s Word is living and active, that it is able to penetrate body and soul, joints and marrow. I believe God’s Word has the power to bring new life.

I hope this wasn’t too weird or freaky for you. If you know me, or stick around my blog for awhile, you’ll know I am absolutely NOT freaky. But I do believe God keeps His promises, even to little old me. And I hope my story encouraged you.