You are here: Home / me / Wikki Sticks Save the Day

The day before I left for California, Lydia and I were running all around buying up that last minute stuff you just need before a vacation. Every time we would get back in the car, I would turn the key and everything would start blinking and clicking! The car started but it seemed like the electrical was messed up.

We had just finished up at Target and were on our way to *choke* Mimi Maternity to buy a *double choke* maternity bathing suit. I was parked in the parking garage and there were 2 giant poles/columns by my car. One at the front passenger side and one at the back.

I inched out, trying to avoid that back pole against my back bumper. As I was turning the key, everything clicked and blinked and then my window rolled down by itself. Freaky. Next thing I know, I hear a sickening scrape and crunch. I flipped open my phone, called Les and jumped out of the car to survey the damage.

I looked immediately at the back of the car and it was unscathed. Then my eyes wandered to the front of the car and I saw my right side blinker hanging off the car, along with the front and side bumper. I had worked so hard getting the back end out of the parking space, I ended up hitting the front end! *sob*

My hubby tried to be nice, but he wasn’t very happy either. He was on his way home so he met me at the darned maternity store to survey the damage (of the car and the bathing suits). Well, there was nothing we could do 12 hours before I left for California and apparently he worked long hours while we were gone and the car has sat in the carport all week. When Les tried to start it the other day it was dead.

To make an incredibly long and boring story short, we realized the battery had been slowly dying because the passenger side mirror was broken. Yes, the light that illuminates your face as you’re applying lipstick in the front seat was missing it’s cover. This made the light permanently on…and it was slowly sucking the juice out of the battery. Hence the clicking and blinking and phantom window rolling.

Hubby tried to tape the switch to off. We jammed paper clips and pen tops up there. But nothing would keep it closed. I sat in the car last night at 11 o’clock trying to figure out how to jimmy-rig that silly light. Then suddenly I saw it– a blob of Wikki Sticks! You know those little strings with a gummy little waxy coating? They came in a kids meal of Lydia’s. I grabbed the blue one and shoved it up into the mirror. The light turned off and stayed off.
This morning, the light was still off, my car cranked and Lydia and I headed off to a puppet show and lunch with my good friend & messageboard mama and her 2 sons. All thanks to my Wikki Sticks! 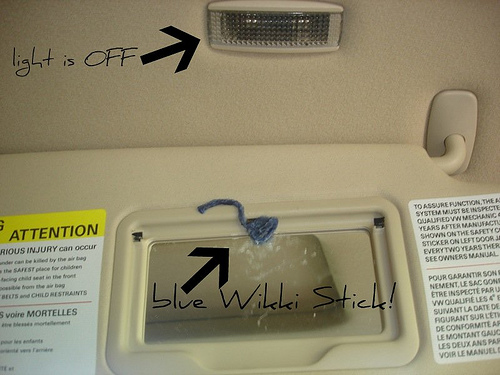 ❮ ❮ Californy is the Place You Oughta Be!
Peeps & Kiddies ❯ ❯