Today is the 35th anniversary of the legalization of abortion.

I took Lydia downtown today to join Georgia Right To Life‘s Memorial for the Unborn.

From the time I woke up, I was thinking about how I’d blog this. I don’t want to start an abortion debate. I’m not a good debater. I believe what I believe. I think abortion is murder. You can’t change my mind. I’m saying this with complete frankness because I don’t want this post to be a persuasive piece, I’m just posting on my blog about what I did today. I want to be sensitive to those that might not agree with me…but then again…I don’t. I believe life starts at conception. And I believe abortion is America’s holocaust. Over 40,000,000 children have been aborted in the last 35 years.

That is the same amount as the population of the smallest 26 states in America. TWENTY SIX.

So to say this was a solemn event is an understatement. As soon as I rounded the corner and heard the music playing and saw the crowd in front of Georgia’s capital, I got tears in my eyes. 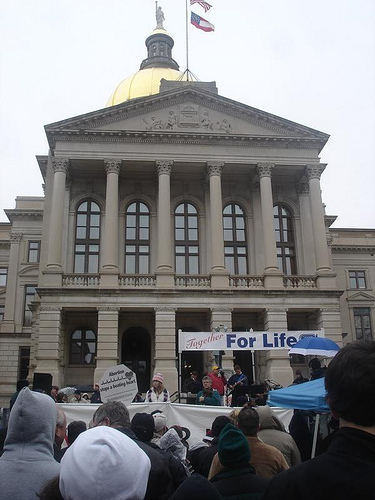 So many people spoke and I was impressed with each one. Especially our Lt. Govenor, Casey Cagle. Wow! What a great man! Atlanta Archbishop Wilton Gregory began with prayer and was wonderful. Sonny Perdue, Georgia’s Governor introduced my favorite speaker of the day, MIKE HUCKABEE.

I may have mentioned that I like famous people. Well, as soon as they announced Mike Huckabee would be speaking next, my mom and I grabbed our stuff (including Lydia) and raced to the front of the crowd. And I have to say, we got pretty close… 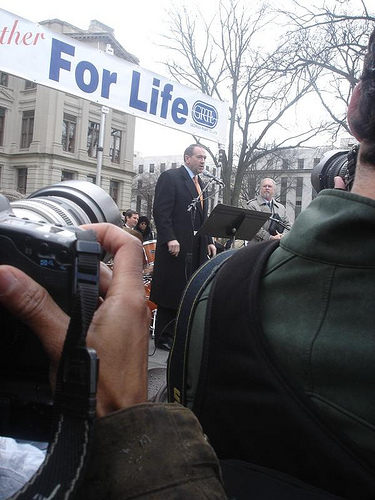 What? You didn’t quite see how close we were? 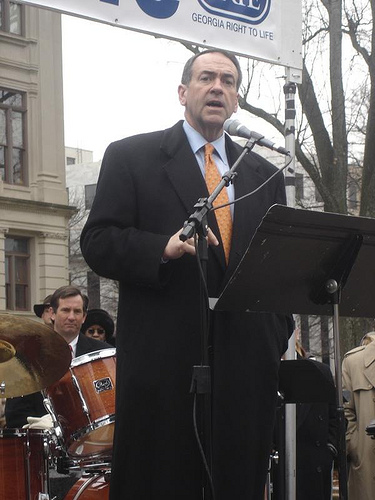 Well, we were very very close. So close in fact… 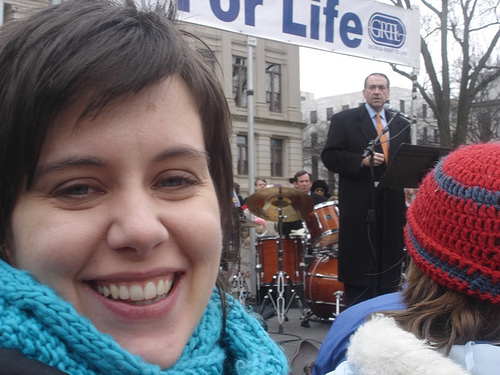 Governor Huckabee and I got our picture together.

Now, back to the event.

After all the speakers (oh, I wish I had been able to take notes! The facts and statistics they gave were staggering!) we began a silent memorial march through downtown. It was amazing to be in the middle of thousands of people and not hear one word spoken. Everyone was respectful. There was no yelling, no chants not even anyone talking amongst themselves. There weren’t even any big posters or graphic photos. I was impressed at how NORMAL everyone was. I didn’t see one freaky person.

As we marched, we passed several people just walking around downtown. Especially as we walked through Georgia State University. Many of the students stood and watched us walk by. Now, let me say that our crowd was made up of a lot of young people–I saw several groups of kids in matching school uniforms. There were lots of moms with their kids. So, as we walked by these college students, I was shocked at the things they were yelling to us. Yelling at the SILENT marchers. One girl yelled, “Why don’t you guys stop marching and start giving out sandwiches to homeless people? That would be more beneficial!” (I’m not quoting her word for word, she said several things, but that was the gist.) One guy yelled at us, “I am a baby killer!” while his friends chortled around him. Another guy walked right through our crowd and said, “What are you guys trying to do? Brainwash us?” No one responded to them (well, actually, someone threw that girl a wrapped sandwich after they passed…I mean, she did ask for one!), everyone just kept marching. I don’t know why that was so shocking to me. Our college campuses are portrayed as being full of our POLITICALLY CORRECT, TOLERANT, FREE THINKING minds. Why would someone on a college campus yell at someone else SILENTLY exercising their right to assemble? I wonder if they would have yelled the same thing if we were Planned Parenthood, PETA or the Alliance for Climate Protection?

But my favorite part of the day was how the march began. A young woman wearing her infant child and trailed by her toddler, played taps on the trumpet. 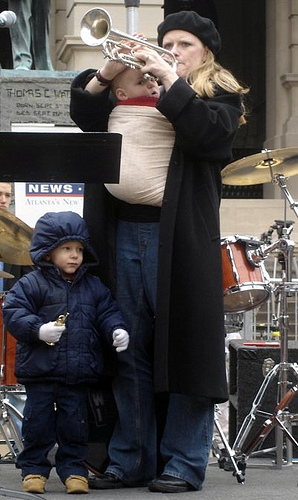 Then as we began to walk, trumpeters stood along our path and played taps as we went by. I still have tears in my eyes remembering it. And remembering the 40million children for whom we marched.

And a few more pictures to give you a feel for what it was like to be there today. 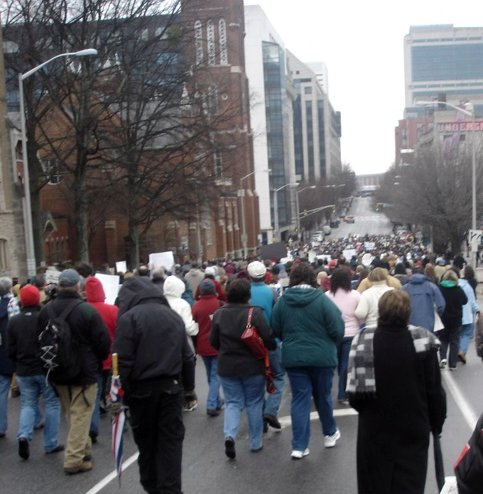 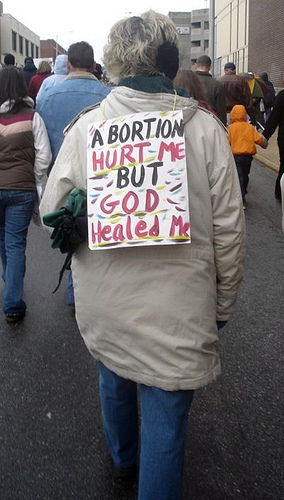 One of many signs with similar sentiments. 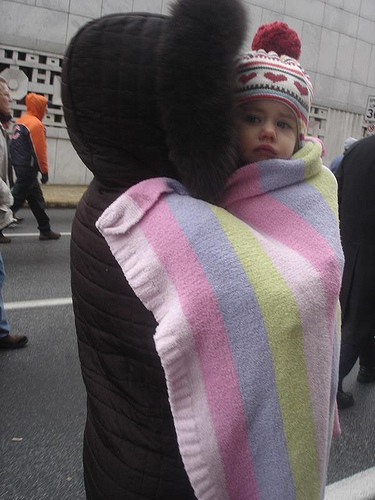 Lydia during the march.