You are here: Home / books / Ch-ch-ch-change

Does change make you quake in your boots? I’m not talking about pennies and quarters. I’m talking about that yank-you-out-of-your-comfort-zone change.

I kinda have a thing about change. I’ve had a lot in my life. I’ve lived in 5 states since I’ve been married. I’ve had two “real” jobs and a few other mini jobs. Last year, like I mentioned in one of my last posts, I experienced so much change, I could have been a psychological study! But the thing about change, for me, is that with each change, it somehow changes you for that next phase. blahdeblah. What I mean is, with each change in a certain area, I feel like it’s harder to change in that area. Hmmm…I can’t say this clearly, let me give you an example:

I’ve mentioned before that my hubby and I were children’s pastors at two different churches. And both of them ended badly. (The second one started badly, but that’s a different story.) When those BIG changes came–of us leaving our homes and churches, it was hard! We didn’t want to. And now that we’re on the other side of those changes, when I think about going into another church, another job, another change–it gets me nervous! I have insecurities that weren’t there before. I have doubts and baggage and (ahem!) unforgiveness that plagues me!

(Wow. We’re letting it all hang out today on Oh Amanda!)

My husband and I go up and down about these changes. Sometimes we talk about it a lot. Sometimes we go weeks without discussing the changes that we know will come in our future. I am in such a comfortable position now, I don’t like to think about change! I don’t want to feel out of control and unsure and vulnerable!

Which leads me to the whole purpose of this post…a book. Yes, a book, Splitting Harriet by Tamara Leigh. I received this book from the wonderful people at Multnomah. As soon as they asked me to read it I said YES, PLEASE! It was practically written for me–it’s about PK (pastor’s kid), involved in church and dreading the changes in her life and her church. The heroine, Harriet, is a reformed rebellious teenager who’s afraid to do anything fun because she thinks she might be tempted to sin again. This isn’t really me, but the whole “I want to be in control” and “I want to have a plan” is VERY me.

I just loved reading a book about someone who has REAL issues. Not like other chick-lit books which are mainly, “OMG! Should I marry the uber-hot missionary or the kinda hot pediatraician?” (hey, I still like those, I’m just sayin’.) I liked the…realness of it.

Am I talking too much about this? Here, read the summary by Multnomah: 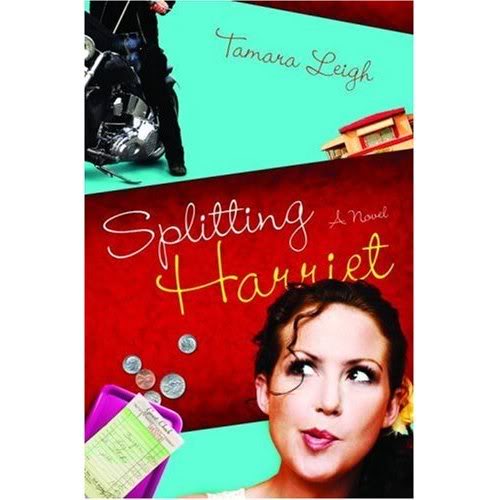 Preacher’s kid and prodigal Harriet Bisset returned to her church and her family in Franklin , Tennessee, seven years ago. Once the proud owner of two tattoos and a nose ring, Harri is now addicted to Jelly Bellys in lieu of hangovers and Bible verses in lieu of foul language. The good news is that she has everything under control: a part-time position as director of women’s ministry, a church family that adores her, a rent-free home in a senior mobile home park, and the possibility of owning the café where she waitresses. Nothing could tempt Harri to return to her old ways. Nothing but a 1298 cc, liquid-cooled, sixteen-valve, in-line four-cylinder motorcycle—and the church consultant riding it. Reformed rebel Maddox McCray’s arrival at First Grace spells C-H-A-N-G-E for the dying church. And it just might mean change for Harri when Maddox sets out to convince her that even Christians are allowed to have fun. The story of a prodigal daughter’s transformation, Splitting Harriet reminds readers of God’s delight in forgiving, loving, and enjoying the ride.

This book was just right up my alley–ministry jobs, church consultants, and Jelly Bellys. Not to mention a major theme in the book is judgment and forgiveness. Which is EXACTLY what our pastor has been speaking on the past four weeks. Hmmm…is God talking to me?!

ANYWAY, if you got through all that heart gush I just typed, you deserve a prize! How about a copy of Splitting Harriet by Tamara Leigh? Well, Multnomah sent me TWO to give away! Leave me a comment and I’ll pick a winner…uhm…on Friday! I’ll announce it the same day as my oh! ho! ho! giveaway, ok?

(oh, I just re-read this post and I didn’t mention so much about the book that I wanted to! There was just so much more that I identified with! I highly recommend it because I think Tamara hit a ton of stuff on the head! Please go pick it up–and if you’d like to read a great interview with Tamara Leigh, click over to Deena’s.)