You are here: Home / me / Helping Kids Deal With Tragedies 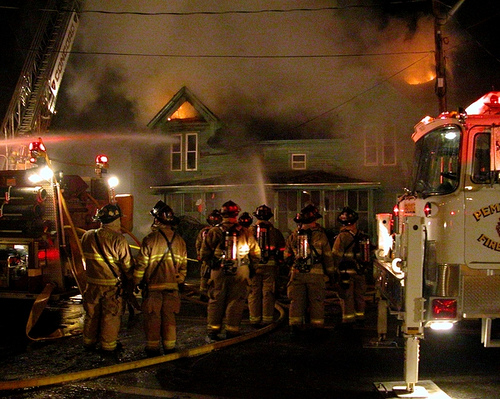 Last week during Performing Arts Camp, my niece came over to spend the night. Her mom (my sister-in-law) was the choir director and was staying late at church so I thought it would be nice to bring my niece home one night. It was a fun-filled afternoon where the kids played in the sprinkler, took a bath in our giant tub, went to the pool and took a shower all in one day. So, as we were getting ready for bed, the girls wanted curlers in their wet hair. And in the middle of it, my phone rang.

My niece handed me the phone and all I heard was screaming on the other end. It was my mom. She was hysterical. I heard her say my brother’s name and something about a fire. I said, “What’s going on?” And she yelled again. Then I heard it–my brother’s house was on fire. And my mom didn’t know where my brother was.

I ran downstairs and told my husband then ran out the door. It was the most sickening, terrifying feeling I’ve ever had. By the time I got to their house (they live next door to my parents), the firemen had arrived and the fire was out. But the damage had been done. Lightning had struck the kitchen and the fire had destroyed most of their belongings.

The miracle in the story is that my niece wasn’t supposed to be spending the night with me that night. She was supposed to come on Tuesday. But I had to cancel at the last minute for a dance class. And because my niece was with me, my brother and sister-in-law did what any kid-less parents would do–they went out to eat. A mere 40 minutes before the lightning struck. Had they been there–cooking dinner in that kitchen? They would have been dead. Immediately.

When I got home, the kids were already in bed (thank you to my husband!). The next morning I didn’t tell them what happened. We decided to bring my niece to her (other) grandmother’s house so my brother and sister-in-law could explain what  happened. They decided to ease her into the story and only tell her the house had been hurt and she’d have to stay with Grammy for the day. Well, after the story got around, they got to check out the damage and they realized that almost everything was gone, they didn’t know what to do.

It was such a scary sight. They didn’t want her to see it and be afraid of lightning for the rest of her life. Or have nightmares about their horrifying looking house. But they couldn’t hide it from her either–the entire church knew! Plus, she’s 7 years old! She’s not stupid.

Remember, this is in the middle of the Performing Arts Camp and VBS which my mom and my sister-in-law are in charge of! Everyone was abnormally stressed anyway! So, finally, they decided they had to  show her the house. They took her out to breakfast alone and told her what happened. Then they all walked through the house together. They said she cried when she saw her room.

Now they’ve had to buy shoes, clothes and even a Build-a-Bear to get back on their feet. They are living with us for the next week until they move into their new home (Another miracle–they were renting their home and just signed a lease on a new house. They were already planning to move out at the end of the month!). It has been a crazy crazy place in our family this week. But we are praising God for His protection and His promise to bring beauty from ashes!

You gave me such good advice when my husband’s grandfather died, so I’m asking today: How do you help kids deal with tragedies like fire, storms or natural disasters?

pic above not their house! photo by benmcleod.