You are here: Home / christmas / The King’s Christmas List 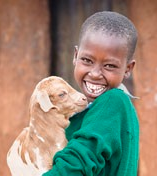 Last night the four of us snuggled on the couch with hot chocolate (chocolate milk in a sippy cup for Asa) and some catalogs. We were looking for Christmas gifts. Were the kids making their Christmas lists with Toys R Us catalogs? Nope. We had the Samaritan’s Purse and World Vision gift catalogs. We were picking out gifts for Jesus.

Asa picked out a goat. Only $75 from World Vision and it can give milk, cheese, yogurt, meat and even fertilizer for a family in an impoverished country. Asa couldn’t live without his “milkie” so we knew he’d like this gift best!

Lydia had me read every single entry. She was interested in every single one. She couldn’t decide what to pick so I asked her “If you were a little girl in another country who didn’t have a lot of food or clothes, what would you want?” I was trying to steer towards fruit trees or uniforms for school. But she chose bunnies! For just $80 you can send 5 bunnies that will produce over 100 babies in a year! Just think of the food and profit that will result from those 5 rabbits.

I chose blue plastic. Yup. 1000 square feet of blue plastic is $130 and it is enough to build a temporary shelter in Haiti. The first time I saw these “blue villages” I knew I had to help buy one. I could just imagine a mom like me who had no place to lay her kids down at night. What would that be like? Giving a house to a mom on Christmas? I can’t think of anything better.

My husband is deciding between farming help and stocking a pond with fish. Typical man gift, don’t ya’ think?

We prayed over our gifts and asked Jesus to accept them as gifts to him. And that he would make them miracles in someone’s life. I think this will be my most favorite activity this year! 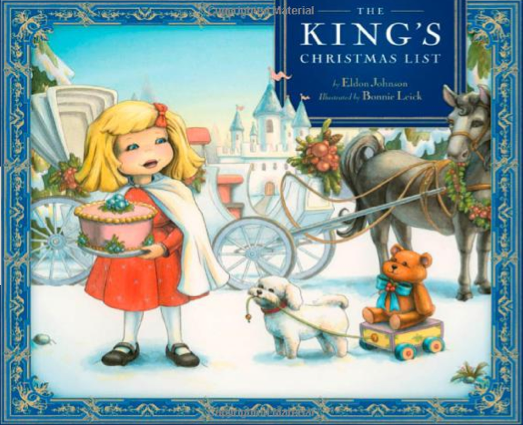 by Eldon Johnson. It’s a sweet story of a little girl and her dog who are invited to The King’s Birthday party. On the way to the party, the little girl encounters several people who need help. She gives her own possessions to them and arrives empty handed to the King’s party. But just when she feels uncomfortable about it, she sees that all the guests start giving gifts to each other and not to the King.

The girl approaches the King and asks him why the guests are giving each other gifts. The King explains that the gifts He truly wants are the ones she had already given to those in need…

“Then the King will say to those on his right, ‘Come, you who are blessed by my Father; take your inheritance, the kingdom prepared for you since the creation of the world. For I was hungry and you gave me something to eat, I was thirsty and you gave me something to drink, I was a stranger and you invited me in, I needed clothes and you clothed me, I was sick and you looked after me, I was in prison and you came to visit me.’ “Then the righteous will answer him, ‘Lord, when did we see you hungry and feed you, or thirsty and give you something to drink? When did we see you a stranger and invite you in, or needing clothes and clothe you? When did we see you sick or in prison and go to visit you?’ “The King will reply, ‘Truly I tell you, whatever you did for one of the least of these brothers and sisters of mine, you did for me.’

But the best part of the whole book is the end–the author encourages kids to redefine Christmas and start giving gifts to Jesus! He’s partnered with World Vision and blood:water to give to kids around the world—which really means giving to Jesus! You can even go to the King’s Christmas List website and click a big map to pick gifts for kids in those countries.

I wish I could explain how excited I am about this. We’ve always done only 3 gifts to the kids (in honor of the 3 Wise Men) but I would honestly love to do NO gifts on Christmas and just give gifts to Jesus instead. My kids don’t need another toy, book or shirt. But there are kids around the globe who need bunnies and goats and blue plastic to survive. I pray this small act will instill a love for others in my children—and most importantly a love for Jesus!

So, what would you give Jesus?