Being on the Disney World Moms Panel doesn’t make me a Disney genius. But I think it’s pretty much assumed and expected that you can hold your own on some Disney trivia, can make your way through the park without a map and recognize the characters at a glance.

Well, I had a few fails at Disney World that made me question my Moms Panel-ness.

First of all, we planned to leave our house at 6:30am. We figured it would take us 9 hours to get to Orlando with the kids. Our first reservation was at 5:30 so that would give us time to check in, freshen up and ride the bus to the Boardwalk. Well, 2 minutes into our trip I remember I didn’t pack any extra contacts. Since I’m blind as a bat, extra contacts are mandatory. We turned around. No biggie. It took maybe 10 extra minutes.

We start driving down the road, hit rush hour traffic and suddenly Les says, “WE FORGOT THE STROLLER.” Not just any stroller, our double sit-and-stand stroller. THE STROLLER. We just stared at each other in disbelief. Really? FORGOT THE STROLLER?! We discussed renting a stroller (but for the life of me, I couldn’t remember how much they were) and I wasn’t even sure Asa would sleep in one of those strollers. So, we turned around. We wasted the first hour of happy, energetic kids by driving home. TWICE. 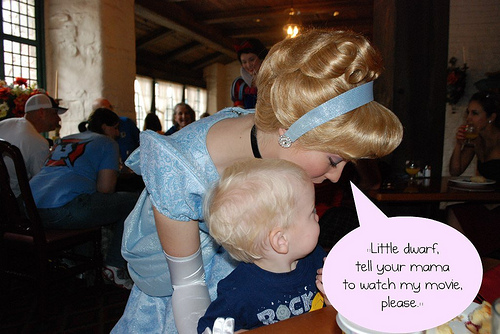 When we had our big breakfast at Akershus to meet all the Princesses, Lydia and I planned to ask every princess a question. If you ask them a question about their story, they’ll talk to you for awhile. It’s makes meeting them even more fun (we had the longest & most fun conversation with Mulan!). Lydia was going to ask Ariel where Flounder was, tell Belle she loved to read, too; ask Snow White why Dopey doesn’t talk and explain to Sleeping Beauty that Lydia has a cousin named Bryar (Briar Rose is Sleeping Beauty’s name…well, her fake name that the fairies gave her).

{For those of you not chuckling yet, it’s because you don’t know the story well. DOPEY is one of the Seven Dwarfs from SNOW WHITE’S story!}

Cinderella says, “Well, I don’t know! You’ll have to ask Snow White! Maybe he’s kind of like my friend Gus Gus!” And even then, I’m all starry eyed and still did not get that I made Lydia ask this question. Finally she leaves and I come out of storybook-land. I look at Les and say, “Why did I ask that?” He said, “I was wondering about that.” Seriously?! You noticed I asked the wrong question and you LET US ASK IT?! Thanks a lot. (He called me “Disney Mom” for the rest of the day.)

I was so kerflumped that I didn’t even ask Snow White a question. Knowing those girls were all in the back discussing their shift and Cindy says, “Did you see those idiots who thought Dopey was in my story?” 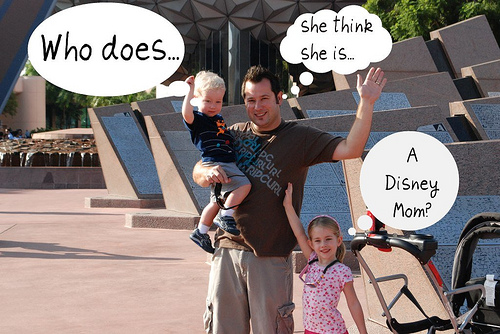 My next big fail is our first day at Epcot. We get up early enough for rope drop (which is when the park opens…and usually a few characters or two to say hello) and as soon as Spaceship Earth (that’s the big ball for you uninitated) comes into view Les and I look at each other and say, “Do you have the tickets?”

No tickets? We forgot the tickets?!! {I have an excuse, really, I do. I had 2 sets of tickets. One connected to our room and one set from the Moms Panel.}

So, Les had to get back on the bus, ride it back to the hotel and then back again. It took about an hour. The kids and I walked around the front entrance, stared at the people running to Soarin’ and Test Track, looked through the mini gift shop and otherwise sat around sighing till Les came back with our tickets. And we walked in with all the other late-comers. 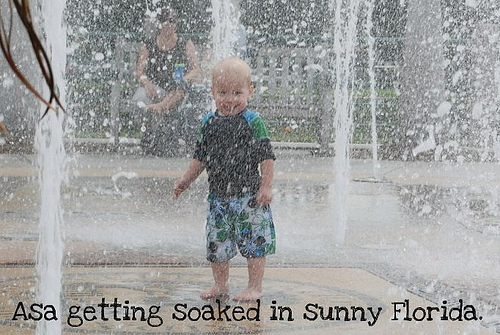 The night we went to Cirque de Soleil we had dinner at Downtown Disney.  As we drove up to Downtown Disney it began to POUR. And I didn’t have a poncho or umbrella with us. Not because we were in the truck either. It’s because I DID NOT PACK ONE. Didn’t even cross my mind. I didn’t pack a pair of jeans, a hoodie or anything that might protect us. So, I had to buy one of those cheesy Disney umbrellas that are about the size of a dime.

What’s worse is I still have the Pocahontas poncho Staci and I got when we were at Disney World 15 years ago. I could have sported that thing in all it’s glory! 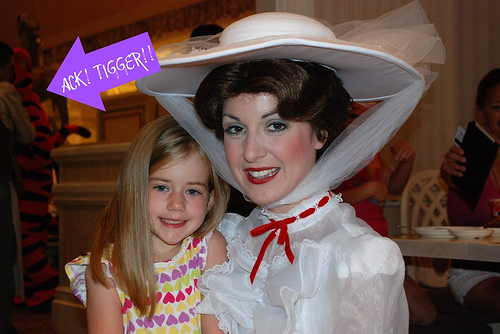 We left Disney early Friday morning and I booked a character breakfast  at 1900 Park Fair to send us off. It’s at the Grand Floridian, the characters are Mary Poppins, the Mad Hatter and Alice. Since Lydia is afraid of the costume characters (but just fine with the face characters) this was the perfect choice. Not to mention the Grand Floridian is gorgeous!

So, we walk in, get our picture taken and when the open the doors to lead us to our table I see WINNIE THE POOH and TIGGER, too! Lydia is absolutely terrified and jumps into my arms burying her face in my shoulder. I just stared at the manager (?) and said, “I didn’t know they were going to be here! I thought it was just face characters!”. We had to do closed eye manuevers through the crowd, Lydia had to hide her face in my lap, I had to shoo away every nice Tigger and Pooh that came to our table. It was heart-wrenching. I kept telling her, “I didn’t know. I didn’t know.” Of course, I also threatened to spank her if she got out of control and started screaming and flailing on the floor. So, it was a lovely morning.

How does a Disney Mom NOT know the difference between Cinderella and Snow White, to bring ponchos, to check the characters at a character meal and TO BRING TICKETS TO THE PARKS?!!

And there you have it. Aren’t you sad you didn’t try out for the Mom’s Panel? If I made it, anyone can!!