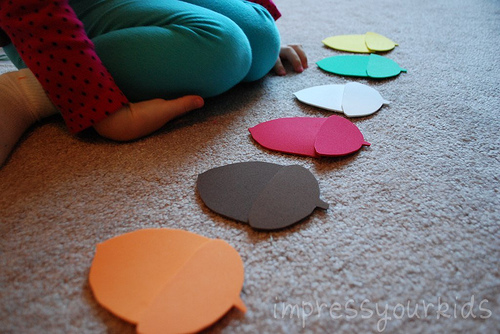 My kids fell in love with Chip and Dale while we were at Disney World. One day as we were walking to a resort for dinner we found some enormous acorns on the ground (like the size of a silver dollar!) and the kids grabbed them, took them to the hotel and put them in their drawers so they could hide them from Chip and Dale. It was like the best souvenir ever!

Coupled with the fact that it is officially Autumn I thought a good acorn craft would be appropriate for the kids this week! I cut out a few acorns and tops from craft foam. Then wrote their colors on them.  They matched up the colors and even Asa got one or two right! 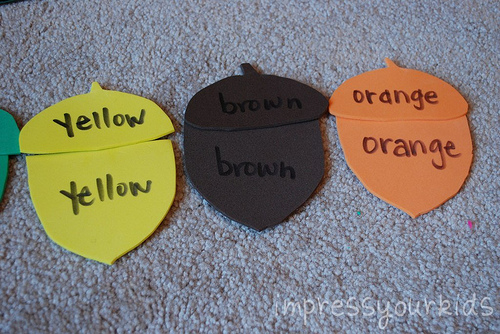 Then I flipped it over and wrote Psalm 104:24 on it. Psalm 104 is one of my very favorite chapters about God being creator. This verse just says, “Lord you have made so many things!” We talked about the different things God made (including chipmunks and acorns) and then I let them match the acorns up again. (Of course, I had to put them in order to read the verse correctly…)

Finally, Lydia just mixed them all up and we read the verse with “red” “green” and “yellow” thrown in. But it was nice because the gist was, “Lord! Look at all the amazing colors you’ve made: red, green, yellow, brown, red and white!” 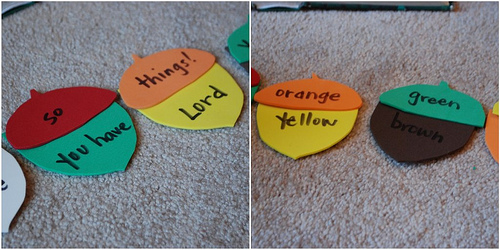 It ended up being a better lesson than I intended but not as much as a real game as I hoped! Regardless, the kids had fun and a seed was planted. (Heh.)