After my little pirate was born, I had planned that his first big event would be BlogHer’s Reach Out Tour in Atlanta. I was all ready to show him off to some fine Southern bloggers. After coming out of the newborn fog, I realized the tour was canceled (about 2 weeks late) and was bummed. I’ve been blogging for almost two years and have never stumbled across an Atlanta blogger!

So, when BlogHer contacted me about attending and reviewing the Blogher & Saturn Meet-Up in Atlanta, well, I was pumped! No need to mention that I know absolutely nothing about cars and any self-respecting car buff would laugh at me if I attempted to make a comment on one. It was all about the bloggers for me!

I hopped in my hubby’s truck (making me even more excited about checking out some new Saturns) with my seven week old pirate and drove down to Atlantic Station. Next time you’re in Atlanta, this is where you want to go. It’s the trendiest place to live, right next door to IKEA (be still my heart!), full of great shopping and yummy restaurants. I parked in the parking garage and realized I left my stroller at home. Nothing like toting an infant carrier, a giant diaper bag, a winter coat and a couple of blankets when you’re meeting new people.

I lugged ourselves up to the main level and to our meeting place, The Lobby at Twelve (uber trendy hotel) and as I walked past the valet area, I thought, “Wow, those are some shiny cars. Who keeps their car that clean?! Guess that’s why they valet.” (Ahem.) I walked in and met Aubra and Abby from Saturn. The properly oohed and aahed over the pirate and then we hopped in an SUV, the Outlook.

As the mom of 2, driver of a four-door sedan, hater of all things mini-van and station-wagon, this SUV was looking like candy to me. Oh, and did I mention it was one of the shiny cars at the valet? Yeah, that’s how quick I am.

I strapped Asa the pirate into the back (very easily, by the way). And while I was back there trying not to wake him as I jiggled the seat belt in place, I noticed three rows of seats. THREE rows! Oooh baby, the things you get excited about as a mom! This car didn’t look big enough to have three rows! I hopped in the front and headed out into Atlanta traffic.

Now, I’m checking out the things that interest me…navigation system, plush leather seats, OnStar, DVD player in the back, XM radio, hidden compartments and power seat adjustments. The stuff that’s really important. As opposed to miles per gallon, all-wheel drive, alloy wheels and all that other silly stuff.

We spend the next five or ten minutes driving around Atlanta (all right turns, of course) and talking about two year olds. Because that’s what I’d be doing in that car anyway. I was pleasantly surprised to discover that the Outlook does NOT feel like an SUV. I didn’t feel like I was driving a boat. I wasn’t being jostled like when driving my husband’s truck. The Outlook hardly felt any bigger than my little four door.

We got back to The Twelve and I tried out those back seats. They fold down quickly with one little pull and you can even fold down all of them for storage space. I like that! Then we transferred Asa to the Aura. This was more the size of my little four-door. It’s cute on the inside, shorter in the front and of course, smaller in the back. It was the Car of the Year last year and I did like it. But I was still digging the Outlook–it’s like a clown car–small on the outside and huge on the inside! (Do you hear an Outlook fan being born?)

The Saturn folks were all so nice, every time they saw Asa they’d say, “Oh, a real life trial, huh?” or “You’re a real mom blogger aren’t you?” Especially after taking this picture of my little pirate reviewing the back seat for me. 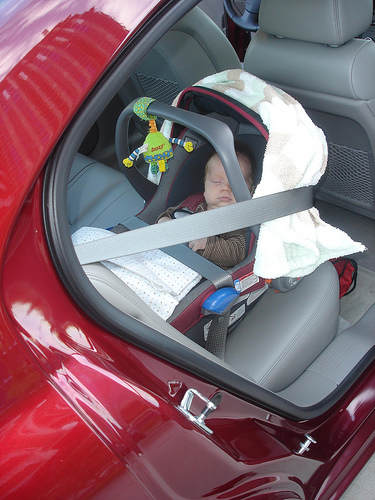 I guess I was early because not everyone had even showed up by the time I was done with my ride and drives. So, I chatted with the girls from Saturn, became the first one to try (every single one of) the hors d’oeuvres and nursed Asa before the room filled up.

Soon, the lobby was filled with ladies (and a few hubbies, too) talking about technorati, twitter and oh yeah, cars. Everyone loved the Sky (Asa and I opted out of that two-seater) and the hybrid. I was championing the Outlook, of course.

And now for the bloggers. There is nothing like getting a subculture together. I’m not saying we looked like a group of trekkies or losties, but I’m sure we sounded just as crazy. I discovered Dawn, my twitterfly who I didn’t even know lived in Atlanta. I met Renee, a somewhat newbie blogger who knows waaay more about blogging than I do. I met food bloggers, shoe bloggers, sports bloggers, mama bloggers and frugal bloggers. We stuffed our faces with spinach phylo triangles, crab balls, spring rolls and blue cheese meat-sicles (I’m sure they had a better name than that…).

The Saturn people just stood around and let us chat. I think they may have been a little mystified by our conversation! Once our end time of 8:00 started rolling around and no one was budging, they said the magic words, “WOULD YOU LIKE DESSERT?” Thank you, Saturn for the flourless chocolate cake. Music to my tastebuds.

So, the venue? Uber trendy. The Saturn folks? Personable and gracious. The cars? Still pushing my hubby for an Outlook. The bloggers? My fave.

Thanks BlogHer! Thank you, Saturn!