I usually only go to movies to review them if I kinda wanted to see the movie anyway. I mean, I’m not going to Trolls Returns or Air Bud 14. So, when I was invited to Ralph Breaks the Internet, I wasn’t sure I wanted to go. My son and I had seen Wreck-It Ralph in the Dollar Theatre a few years ago and I thought it was kinda boring. But, everyone was busy the night of the movie preview except for the two of us, so we decided to go.

Do you already know where this is going?

Vanellope’s game breaks when she goes off-road. She and Ralph go into the internet to get a new controller off of eBay. They try many things to make money. Vanellope discovers another racing game and likes it better than hers, even willing to leave her life with Ralph in vintage-video game land. (I cannot believe I just did that so concisely.)

WHY YOU WILL WANT TO SEE RALPH BREAKS THE INTERNET

1–You like the internet. There were all kinds of internet jokes throughout the movie. From eBay to dial-up, viral YouTube videos to the Dark Web. You’ll have to be quick to take it all in, it’s like a crazy, neon Japanese mall (not that I’ve ever been to one…) with a bazillion flashing lights.

2–You like rambling stories that don’t really have a plot or maybe have one or two and then turn off into another direction with an incredibly lame message and moral to the story. Wow. That wasn’t fair. Let’s go to our next section…

WHY YOU WILL NOT WANT TO SEE RALPH BREAKS THE INTERNET

1–The story line was just…I don’t even really know what it was about. There was definitely the first storyline of Ralph and Vanellope trying to get the part to her game. They go to eBay, they try to make money but it quickly turned into this weird thing about Ralph being insecure and overprotective and “best friends don’t have to have the same dream” thing that just barrrely made sense. I told my son it was like a bunch of 21 year olds wrote this movie and then some older Producer was like, “It needs a moral!”, so they just tried their best to come up with something.

2–Vanellope discovers a new racing game that she wants to live in from now on called Slaughter Race…which looks remarkably like Grand Theft Auto to me. In fact, they discover the game because they are TRYING TO STEAL A CAR. Vanellope ends up singing her own live-your-dreams song about Slaughter Race (which is supposed to be tongue-in-cheek but was super weird to me). Can I just say it one more time: SLAUGHTER RACE.

3–While trying to raise money, Ralph and Vanellope do all kinds of things online: the aforementioned car theft and make viral videos to get millions of “hearts”. I literally cannot think of anything worse I’d want my kids to imitate. I’m not saying they are going to imitate Ralph and Vanellope in that way but SERIOUSLY?

4–Ralph then visits the Dark Web to get a virus and through a series of events turns into a million insecure, zombie-like versions of himself which all turn into a giant, writhing Ralph and it was super gross. (Did you see the Nutcracker and the Four Realms yet? Kinda like the Rat King.)

THINGS TO TALK ABOUT

The only meaningful conversation my son and I had about the movie was not even a part of the plot nor did it involve Ralph or Vanellope. At one point, Vanellope goes to OHMY.DISNEY.com and sees a girl playing a game show-like quiz. Something like, “What do your friends say you are? Nice? Funny? Kind? Helpful?” She is in front of a giant curtained stage with a host in a tux and thousands of people watching her. Right when she is about to choose one of the attributes, it flashes to the actual girl sitting on her bed, with her iPad in a quiet room saying, “Kind?”

THAT was the most real picture of the internet ever. I told my son, this is what the internet seems like–you are alone, no one knows what you’re doing, you’re just entertaining yourself. Instead there is all this expanse of people watching, trying to make money off of you, connect to you and influence you. When you are alone online, you are not alone nor anonymous.

There may have been something to talk about with Ralph’s insecurity but I still can’t put my finger on it. I personally thought Ralph was a good friend throughout the movie.

The Princesses! If it weren’t for the Princesses I may not have made it through the movie. It’s always fun when Disney pokes fun at themselves. 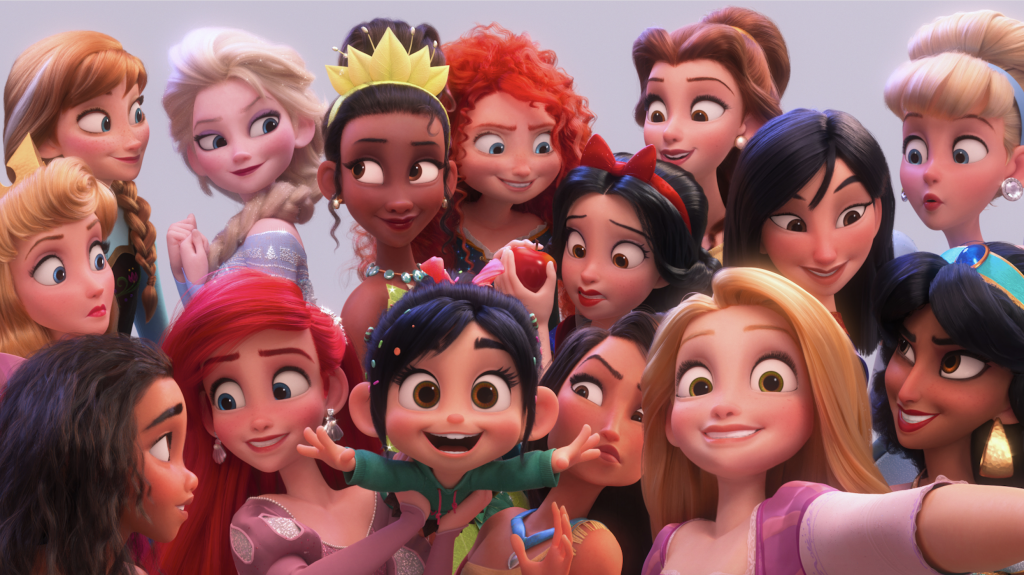 I mean, I told you my thoughts about the big strong man solves all your problems comment, but overall, the Princess scenes saved the movie. Also. I want all their pajamas.

When the movie was over, my 10 year old son, unprompted, said, “I don’t know if I liked that movie.” So. If you’re thinking about seeing Ralph Breaks the Internet over Thanksgiving, I’d stay home and eat more pie. Then, in a few months when it comes on Netflix, just fast forward to the Princess scenes.