You are here: Home / books / Speaking Godly Character Over Your Son

This post was originally published on the MOB Society in 2010 and subsequently lost in the bowels on the internet. I just ran across it today and thought it was fun enough (and 2 year old Asa cute enough) to post for posterity. Enjoy!

I usually get inspired to do activities with my kids when we read. I find a book they like and I try to figure out how we can make it come alive for them. My son, Asa’s favorite book is called, I’d Be Your Hero by Kathryn O’Brien. It’s an awesome story about a little boy who tells his mother, “If you were a queen, I’d be your hero!”

As he tells her all the exciting things he’d do {like go on quests with his father, ride a white steed through the countryside and practice archery}, she counters with good things he’d do within those events. It’s the perfect example of how every parent should speak over their child. For example, the little boy says, “At nighttime we would read by the fire in our castle’s great hall” And the mom replies with “…And you would listen carefully because you are a good listener”. Then there is a supporting scripture italicized at the bottom of each page.

In essence? This book is a fictional account of how you can lead your son into godly character qualities! I love reading it and saying “Asa” instead of “the boy” and “Mommy” instead of “his mother”.

To help illuminate this story for Asa, I picked one of my favorite pages about how the little boy discovers all kinds of new bugs and insects. 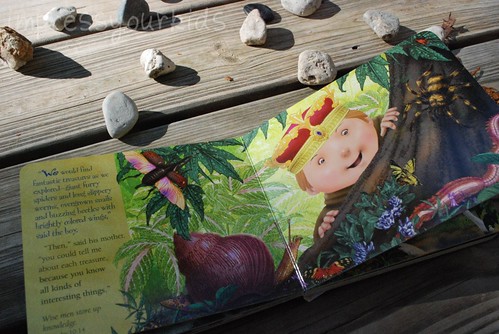 When the little boy tells about the bugs he’s going to find, his mother says, “Then…you could tell me about each treasure, because you know all kinds of interesting things.” And the verse on the bottom is Proverbs 10:14, “Wise men store up knowledge.”

And whether my son stores up knowledge about insects, the solar system, government or Bible trivia, I pray he will always be wise!

So, we set out to make our own amazing insects. We took our bug collector outside to locate some pretty rocks and other nature items. According to that big mosquito bite on his head, it looks like a bug actually got to him first! 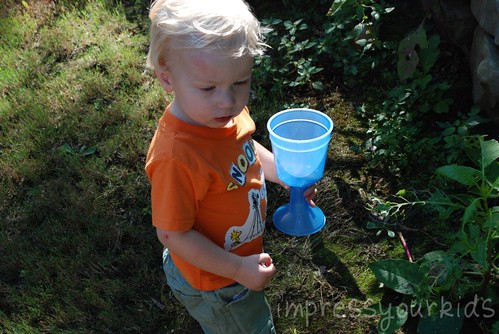 After we collected some rocks and a few fun nature items, I grabbed my hot glue gun and we set to making bugs. I have to admit my almost 2 year old little guy didn’t have a lot of creative input on this one. But he definitely liked them and even giggled when I asked him if they were silly. 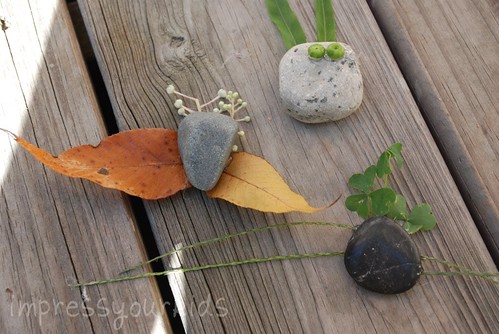 We were going to hide our rock bugs and go exploring for them just like the little hero in the book. With the mosquitoes and the Georgia sun, it was the most we could do to make our creatures. Before we went inside, Asa joined the ranks of boyhood by doing what boys everywhere do-he pulled all the legs off our new bugs! 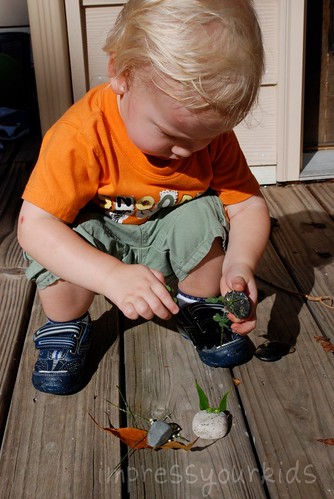 I encourage you to pick up this book and start speaking God’s character over your son—and then see what you can do to make these qualities tangible in his life!