(I got so excited about this post, I felt like I was shouting it with my fingers. So, I recorded myself reading it for you. Click play below to hear! And no, there’s no shouting.) 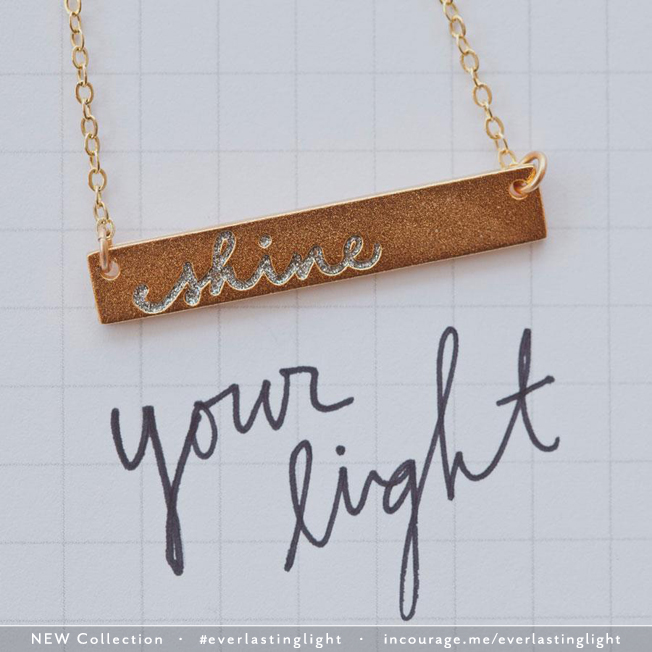 When I was in Middle and High School it seems like our Youth Pastor talked about being a light a lot. You know, “Let your light shine before men, so they can see your good deeds and praise your Father in heaven” kinda thing? Newsboys’ song SHINE was a hit, we wore Wordless Book bracelets and Christian T-shirts were big-time. As a Christian teen, shining your light is like the number one thing to do.

I think what I missed out of that whole equation was WHAT that light was. Of course, it was Jesus. But what exactly? Every time I did a good deed, it made me shine a little brighter? If someone saw me with my Bible, it made me glow? It’s a good rallying cry, but who needs my little light?

As I’ve grown–and maybe this is just part of growing up, I’ve seen the darkness of this world. A dark world where babies die, people I know murder and are murdered, death shows up unexpectedly, marriages break-up, affairs are hidden, sickness wreaks havoc and depression wins. I feel that darkness all around me. I want to shield my children from it, wrap them up, hide them and keep it as far away as possible. That sticky, inky, overwhelming darkness. I hate it.

And then I remember.

It’s not something I conjured or drum up because I said a prayer or obey the rules. The Light is from God. From the beginning of time.

“In the beginning was the Word, and the Word was with God, and the Word was God.  He was with God in the beginning. Through him all things were made; without him nothing was made that has been made. In him was life, and that life was the light of all mankind.  The light shines in the darkness, and the darkness has not overcome it. There was a man sent from God whose name was John. He came as a witness to testify concerning that light, so that through him all might believe. He himself was not the light; he came only as a witness to the light. The true light that gives light to everyone was coming into the world. He was in the world, and though the world was made through him, the world did not recognize him. He came to that which was his own, but his own did not receive him. Yet to all who did receive him, to those who believed in his name, he gave the right to become children of God— children born not of natural descent, nor of human decision or a husband’s will, but born of God. The Word became flesh and made his dwelling among us. We have seen his glory, the glory of the one and only Son, who came from the Father, full of grace and truth.” John 1:1-14

Jesus was with God in the beginning. He created the light:

“In the beginning God created the heavens and the earth. Now the earth was formless and empty, darkness was over the surface of the deep, and the Spirit of God was hovering over the waters. And God said, “Let there be light,” and there was light.  God saw that the light was good, and he separated the light from the darkness. God called the light “day,” and the darkness he called “night.” And there was evening, and there was morning—the first day.” Genesis 1:1-5

And after this prophetic first act, He spoke through the prophet Isaiah about the real, utter darkness…

“The people walking in darkness
have seen a great light;
on those living in the land of deep darkness
a light has dawned…For to us a child is born,
to us a son is given,
and the government will be on his shoulders.
And he will be called
Wonderful Counselor, Mighty God,
Everlasting Father, Prince of Peace.
Of the greatness of his government and peace
there will be no end.
He will reign on David’s throne
and over his kingdom,
establishing and upholding it
with justice and righteousness
from that time on and forever.” Isaiah 9:2, 6-7

Soon, the Light promised in the form of a baby would arrive. But even as this Light was forming in Mary’s womb, we were told of His coming by Zechariah as he speaks to his son, John:

“And you, my child, will be called a prophet of the Most High;
for you will go on before the Lord to prepare the way for him,
to give his people the knowledge of salvation
through the forgiveness of their sins,
because of the tender mercy of our God,
by which the rising sun will come to us from heaven
to shine on those living in darkness
and in the shadow of death,
to guide our feet into the path of peace.” Luke 1:76-69

Jesus is born with fanfare. Angels! Shepherds! And the worship of an aged man named Simeon,

“Sovereign Lord, as you have promised,
you may now dismiss your servant in peace.
For my eyes have seen your salvation,
which you have prepared in the sight of all nations:
a light for revelation to the Gentiles,
and the glory of your people Israel.” Luke 2:29-32

Soon, wise men from the east followed a star—a bright light in the sky!—that announced the birth of a King:

“…they went on their way, and the star they had seen when it rose went ahead of them until it stopped over the place where the child was. When they saw the star, they were overjoyed. On coming to the house, they saw the child with his mother Mary, and they bowed down and worshiped him. Then they opened their treasures and presented him with gifts of gold, frankincense and myrrh.” Matthew 2:9-11

All this light symbolism and metaphor comes together when Jesus himself, in the days before He is to be crucified says,

“I have come into the world as a light, so that no one who believes in me should stay in darkness.” John 12:46

If there’s any light inside of me, it’s because of Jesus’ great light. It’s because He has peeled off the thick black skin of darkness and open me up into His blinding, healing, freeing light.

A light that rules forever:

“ There will be no more night. They will not need the light of a lamp or the light of the sun, for the Lord God will give them light. And they will reign for ever and ever.” Revelation 22:5

There was darkness. And God spoke light into existence. And He separated the darkness from the light.

There is darkness. And God sent Light into our existence. And Jesus separated us from the darkness with His Light.

The light of Christmas, the magic and the sparkle and the shine? Just a blip in this timeline of Jesus’ majestic everlasting Light! 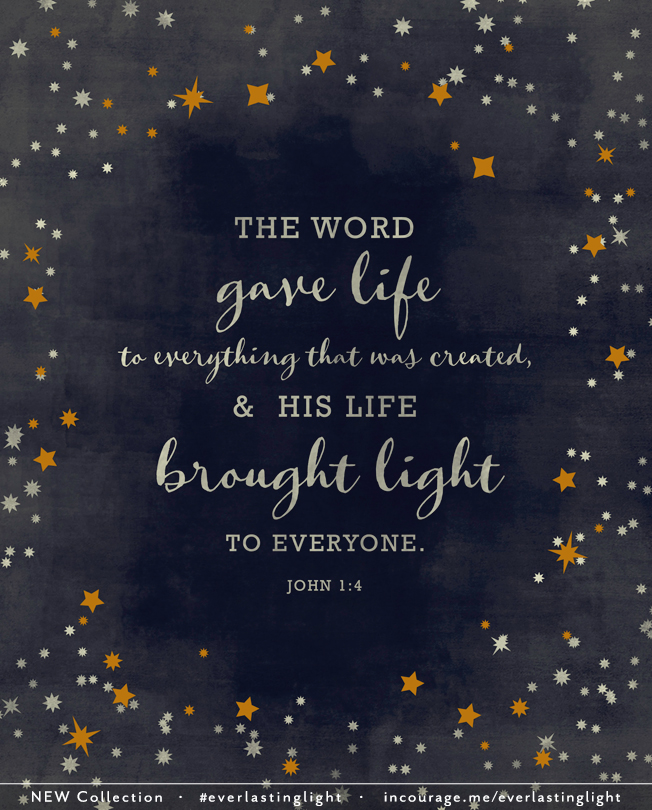