It’s been a whole month since I’ve been in these here parts! During my little bloggy break, as you know, Asa started kindergarten. With our homeschool-hybrid, he goes to school two days a week with Lydia. I assumed those two days–MY two alone days would be full of answering my emails, finishing posts I’ve had in my drafts folder and other such super-star-blogger practices. If nothing else, my house would be cleaner, right?

The very first day I was home without the kids, I was literally standing in the middle of the house looking up at the sky wondering what in the world I should do. I felt absolutely lost. I knew I was supposed to do something productive but just couldn’t put my finger on exactly what that productive thing should be. It got a little better the next few days but then, well, LIFE took over. I had to help the kindergarten teacher (and lots of other moms) cut out crafts for Art class, I went to Moms in Prayer, I had to run errands for my husband, I went to the grocery store and all sorts of other…STUFF.

Anywhoo, the break was good, too. I was much more singularly focused on school and home this last month. But then, something began to sneak up on me that got my focus moved and my heart-rate pumping a bit. Do you know that there are only FIFTEEN Saturdays until CHRISTMAS?! Y’all. That means there are only TWELVE Saturdays until Truth in the Tinsel begins! You might not know (or you might, because I talk about it every year) that October through December are straight up Truth-in-the-Tinsel time in my inbox and mind. And ever since my friend Sunny’s post about a Truth in the Tinsel Swap Party, I’ve had it in mind to do a meet-up of all the Atlanta-area Truth in the Tinsel folks to have our own little Swap Party.

So, I did it! I got it all squared away and figured out and now, my Atlanta-area friends, you are cordially invited to a Truth in the Tinsel Swap Party on Sunday, October 12th! 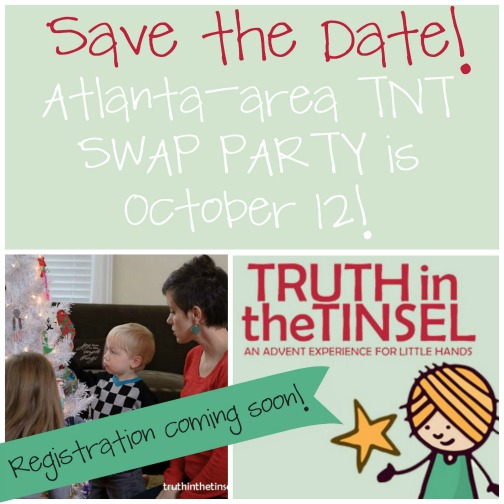 What’s a Swap Party? Well, basically, it’s like a cookie exchange party. But instead of bringing 4 dozen cookies, you bring a slew of craft supplies all ready to go for one of the days of Truth in the Tinsel (maybe enough black paper and tissue paper for 24 people to make the day Day 1 candle) and then you’ll switch out with the other people at the party and when you walk away–you’ll have EVERY SINGLE craft ready to go for Advent! How cool is that?!

Registration will begin later this week and will include all the details (including time, location, what craft to bring, childcare, super-fun extras and more!) And if you’re not in Atlanta (*sniff*), don’t worry, we’ll be sharing the fun with you, too! I’ll also be keeping track of all the details and behind-the-scenes so you can craft your own Swap Party!

So, right now? All I want you to do is be CRAZY EXCITED about this, share it with all your Atlanta-area friends and then leave me a comment telling me how excited you are there are only 12 weeks till Christmas!! The registration will be limited (based on the venue) so make sure you’re subscribed to ohAmanda to get the most instant updates and are a friend on Facebook so you don’t miss the announcement when registration opens!