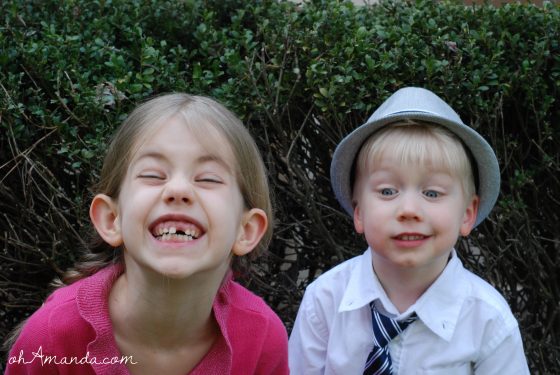 (I don’t think I ever showed you pictures of the kids at Easter. Pretty snazzy, huh?)

This is  my one awesome make-your-kids-obey-and-stop-whining-fighting-and-otherwise-disobeying trick. Ready?

It’s a sad truth that many people believe. But I don’t want that attitude for my kids. I want my kids to be best friends. I want them to see the advantage of having someone who has known you your entire life and is your best ally. I want my kids to practice growing up with someone who loves them the most. I want my kids to view their sibling as their ace in the hole, the person they can always fall back on, their secret keeper, and the one who will always pick them up. 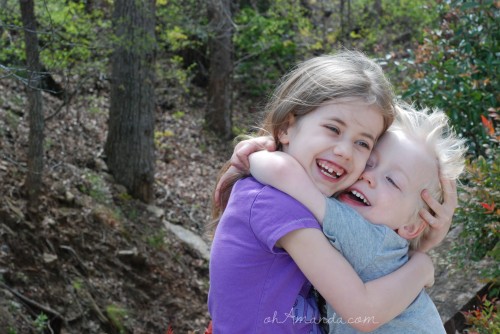 There is one thing that gets in the way of this beautiful sibling relationship: my kids are human. And human beings are selfish. I know, because I am one. Whenever my mama-pride begins to swell at my sweetly playing children, you can bet that one of them shows that selfish human side and starts yelling, “Uh! No fair! That’s mine! Mommy! She took that! Give that back!”. Which of course makes the other one shoot back, “Nu-uh! It’s my turn! Give it to me! MOOOOMMMMMYYYY!”

Those little arguments can get out of hand and take over a game, a conversation, a playdate and even a whole day. Those little arguments hurt feelings and can set a course of an entire relationship! My goal is to help my kids navigate through those tough spots so hat tthey can set aside their pride and really love each other.

There are many different ways to stop sibling squabbling. I’ve tried the whole this-is-your-brother-and-he’ll-be-your-best-friend-forever speech. I’ve given them time-outs. I’ve separated them. I’ve taken away privileges and given punishments. I’ve made them apologize and give hugs.

But my all time best strategy for stopping arguments in an instant?

I take away the privilege of speech.

When an argument goes on too long or takes a step into that-was-too-mean, I say, “No more talking.” And even though they weren’t obeying any of my other rules of being kind, gentle and loving, they for some reason obey this one. They immediately stop talking, and it immediately douses the fire of anger and whining.

I think what makes this little trick work so well is that it has nothing to do with their attitude, their heart or their actions. It’s as quick as dropping a ball–it drops the argument, drops the whine and drops the anger. And more often than not, when they are allowed to speak again gentle words return, too.

Not only is this an effective strategy that can be used at any place and any time, I think it’s a picture of how we should be in all of our relationships. When we find ourselves getting too selfish, too argumentative and too upset, we need to just shut our mouths. We need to drop the conversation and let our minds and hearts take a break. Then we’re able to start again, either forgetting the past or confronting the problem with new clarity.

In the Bible, James writes, “we should be quick to listen, slow to speak and slow to become angry.” (James 1:19) I want to help my kids understand this concept, and I think this little step of literally shutting our mouths is a practice they can use for years to come.

What’s your favorite way to douse the spark of sibling squabbles?