You are here: Home / books / The Story of The Story 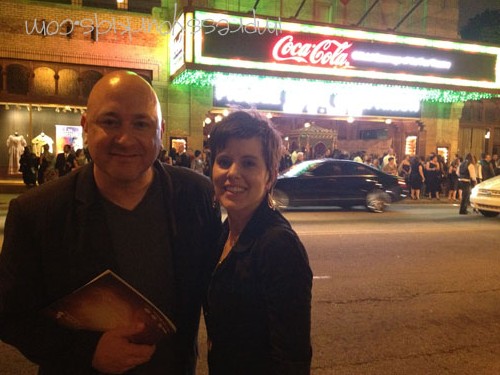 {Michael and me at the Fox Theatre!}

A few weeks ago, I got a direct-message on Twitter from my friend, Michael from World Vision. He’s the guy that led us on our blogging trip to the Dominican Republic. He normally leads big-time artists on trips and he’s super well-connected in the Christian Music industry. So, when his direct-message asked if I wanted to go to the Dove Awards with him I was pumped! (OK, giddy might be a better word!) My best friend Staci and I have crashed the Dove Awards twice and we’ve always been Christian Music fans.

So, Staci and I got dolled up, drove to downtown Atlanta and met Michael. He led us to our seats on Row F (!!!) and we settled in as he explained why he was such a VIP at the Doves. World Vision and Zondervan partnered to produce this fabulous CD and tour called, The Story. Have you heard it? It’s all written by Nichole Nordeman (my fave!) and each song tells a different story from the Bible. 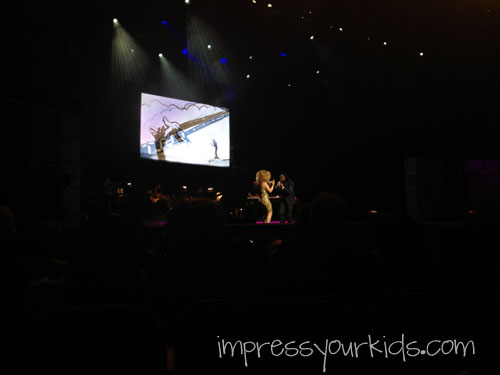 {the story of Joshua performed by Blanca and Michael Tait}

Michael produced three songs from the tour at the Dove Awards. People like Michael Tait, Todd Smith from Selah and Natalie Grant sang songs that told the story of Joshua, Jesus and Mary Magdelene. It was so incredibly powerful I have tears in my eyes just writing this! When the three songs (and accompanying video segments) were done I turned to Michael and said, “I forgot where I was.” I was not in the Fox Theatre watching the Dove Awards, I was in the middle of the Bible. It was chill-worthy.

Which is pretty amazing as Staci and I were pretty star-struck the whole night, especially since we were sitting right in the middle of the artists and industry-type folks. We felt kinda famous. 🙂

Fast-forward a few days and I’m off to the Orange Conference. One of the vendors was Zondervan and The Story. This time it wasn’t the CDs or the tour, but the accompanying curriculum for churches. I was so excited I talked the poor PR guys’ ears off at the table about the tour. They in turn, let me take home The Story curriculum and books to preview and share with you!

It’s really a fabulous idea. Preschool, elementary, teens and adults all have their own age-appropriate chronological Bible story-books. The books follow the same stories and then the churches teach on those lessons. It’s a fabulous idea to keep families on the same page at church and talking about it during the week.

I’ve just been reading the Children’s version to Lydia each night before bed. And honestly, before we started I thought, “She’s gonna get bored with this.” The stories are only about 2-3 pages long and the stories are straight-forward (not story-ish like The Jesus Storybook Bible) but I was wrong. She loves it! She can’t wait to read it every night.

Plus, we’ve had some very interesting conversations about the Bible because of it. For example, have you ever talked to your kids about the Ark of the Covenant? Trying to explain how it’s not an idol but still a place for God’s Spirit? Really weird. But still. Good conversation about how the Holy Spirit isn’t far away from us–but really in our lives and working in our hearts every day.

I haven’t read the other versions of the book or looked through the curriculum yet. But I am thinking about doing something fun with it this summer (they even have trading cards!). So, I’ll let you know what I think of it. If you’re looking for a Bible storybook for your elementary kiddos, I really do like this one. And yes, the CD. You must get the CD!! 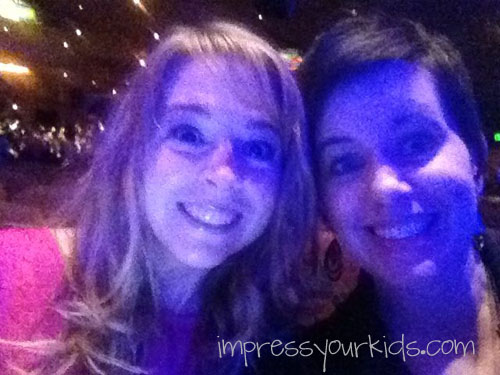 OK. And one more Dove Awards picture for you. This is Staci and me as we freak out that we’re in Row F. I think the magical blue glow is from our phones! Giddy, right?

Have you read or heard The Story? What do you think of it?