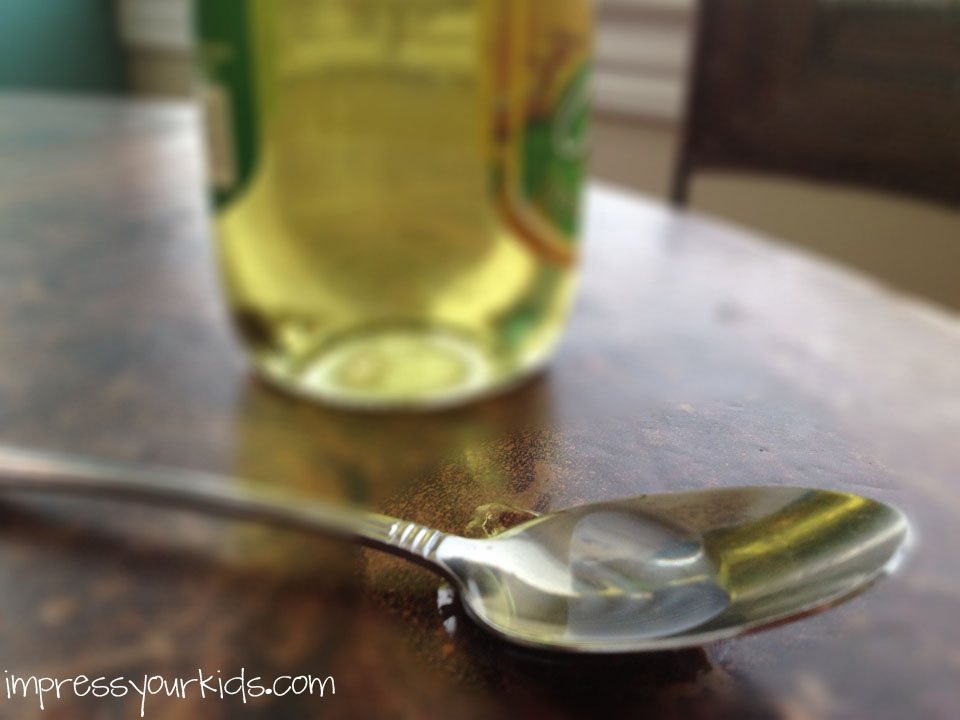 I wasn’t super excited about this day’s activity. I knew I wanted to do the vinegar because it shows up in all four gospels. Jesus is offered vinegar with myrrh which he refuses (presumably because he didn’t want to dull the pain), then just before He dies he says, “I’m thirsty!” and they offer him rice vinegar to drink. After he drinks it, He gives His spirit up and dies.

I loved the idea of the kids tasting vinegar but couldn’t get a good handle on what it meant. What would be the purpose outside of just using their sense of taste?

I told the kids I wanted them to taste vinegar so they would know what Jesus tasted. My husband poured a spoonful of rice vinegar a la Mary Poppins for the kids. The meekly drank it (I did, too and shuddered! Gah!) and were appropriately apalled by its flavor!

Then we talked for a few minutes about how horrible being on the cross must have been. That Jesus would have been in pain, embarrassed and potentially angry, yet he forgave the robber, the soldiers and took care of His mother while on the cross. Even in the bitterness of crucifixion, He was loving.

I think it was a good object lesson. It definitely reminded me (especially because that vinegar stayed in my throat for hours!) that Jesus did something hard for me.

But that night as we prayed, I feel like I had even more understanding about the vinegar. Again, maybe not expressly shown in the Bible (so take it with a grain of salt), but we know that Jesus took all our sin on Him, all our sickness in Him. In affect, it was poured into his own human body. In fact, in the garden, He asked His Father, “please, let this cup pass from me!”. He didn’t want to drink it.

But he did drink it. He drank our sin and sickness. He did not pass the cup, but poured the bitterness of our life into His own. He drank the cup so we could be united to Him. John 19:28 says,

“Later Jesus said, ‘I am thirsty.’ He knew that everything was now finished. He knew that what Scripture said must come true. A jar of wine vinegar was there. So they soaked a sponge in it. They put a sponge on a stem of the hyssop plant. They lifted it up to Jesus’ lips. After Jesus drank he said, “It is finished.“

Jesus drank not just the vinegar but the cup of God’s wrath against our sin. He drank it for us. He knew it was finished after He drank.

So to me, that vinegar is not just a sign of Jesus’ thirst. The vinegar is a picture of what He truly drank for me. My sin, my pain, my sickness, my depravity.

Thank you, Jesus! Thank you for willing to drink the bitterness of my sin on the cross!