{I wrote this post Monday morning and added to it throughout the day. I was all fired up to post it, then felt weird posting it. Then after reading Amy’s post and her desire to chronicle her feelings, I decided to do the same.} 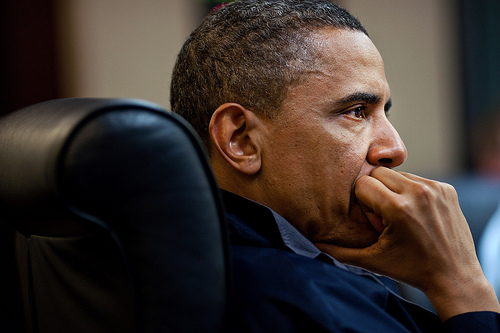 Becky loves to send me text messages. Everything from “Did you watch Big Bang last night?” to “I just found a possum in my trashcan at school.” (True story.) But this morning I checked my phone and saw, “Osama bin Laden is dead.”

Who knew I could be so affected by those words?

I don’t think of September 11 every day. Probably not every week. Or even every month. But when I do see the images? And remember the terror (very real, literal and present terror) I am overcome. Last week I saw Eric Draper, White House photographer interviewed. He shared pictures from 9/11 and tears immediately came to my eyes. Because in that one day, all of the United States was united. We, like George W Bush were saying to New York City, “I hear you!”

So, to hear that the mastermind of the September 11 attacks was dead–I was emotional. In fact a bevy of emotions…

Pride: People rushed to the White House and were chanting, “U-S-A!” while taxi cab drivers honked their horns to the beat. I love that camaraderie and patriotism. It’s something we haven’t had since 9/11! I got teary-eyed thinking about the people around the country who were hearing the news and rejoicing because bin Laden’s death kind of signals a chapter closing in one of the most horrific events in our country.

Admiration: As I read an article (the only one I read, all the news I got was from twitter & facebook) about the play-by-play of what went down yesterday, I could just imagine the Navy Seals that were DOING THEIR JOB. It doesn’t matter if they agreed with what they were doing, if they were Christians or Muslims, if they were scared, if they had voted for Obama or George W–they had to do their job. And they did it. And they will never be publicly honored for it. I wonder what those men are doing now? Do their families even know?

Shock: Obama ordered an attack on Osama bin Laden? He said, “justice has been served”? So, it’s justice put a bullet in someone’s head? Isn’t that revenge? What happened to standing trial for your crimes? I mean, I’m glad the man’s dead. But, I dunno, maybe it shows my ignorance, I thought Obama would be “above” that.

Anger: What kind of world do we live in? Who hides in a shelter and uses a woman as a human shield? Who masterminds attacks on entire countries! How can there be people so dangerous we have to send secret black ops into get them?

Fascination: Did you know twitter broke the news before the speech? Before the news stations? Some people in Pakistan were tweeting the entire event not knowing Osama was involved. How small has our world become?!

I wrote this post in my closet this morning. I’ll admit I was hiding from my kids because I wanted to finish it but didn’t really want to tell them what it was all about. And since then I’ve been reading lots of posts from Christian bloggers who are upset at the jubilation they’ve seen as people are updating facebook and twitter with things like, “Thank God, Osama is dead”. And even more cavalier statements.

And these posts ruined mine. I was feeling patriotic and happy. And now? I’m irritated. Not at the idiots who write nonsensical things about Osama. But the other people who feel it’s necessary to write an entire blog post reprimanding them. If you don’t want to celebrate, then don’t. If you are a pacifist, then don’t vote. That’s right—governments make war. The USA takes peace by force. Why does this surprise us?

I might throw a red-white-and-blue party tonight. Not because I think it’s a good idea to do some vigilante style law enforcement. But because as an American, I saw closure happen for many people affected by September 11th. I saw our government do something that was 10 years in the making.

As a Christian, I do not rejoice that a man died separated from God. But I mourned for him before he was dead. I mourn for people around the globe that don’t know Jesus.

There is no right and wrong answer to our response here. In fact, I think we’re in a quandary. We are in fact double-minded and an emotional oxymoron. We should be happy when evil is eliminated. We should be sad for those who do not know Christ. But we should not be majoring on the minors and aiming our own weapons at people not as articulate as we.

{And feel free to tell me in the comments if this post was just as bad as the other posts.}

{Not sure if I should post this or not. Contemplating it’s awesomeness.}

Killing one man does not destroy Evil in the world. But there was One Man who, in His own death, triumphed over Evil. And He shall reign!

So, how did the news of Osama bin Laden’s death affect you?