You are here: Home / disney / Fun Stuff To Do At Disney Without Spending A Ton of Extra Money

Remember Tuesday? Like 2 days ago? Remember how I never did a Top Ten list? Yeah, well. I finally got around to finishing it. And the reason it took so long is because I AM AT DISNEY WORLD TODAY! Actually, I’m at the Omni Resort by ChampionsGate and it is SWANKY! We got the deal of the century (waaaay cheaper than Disney) by doing Priceline. In just a few minutes we will be driving to Disney’s Grand Floridian Resort and staying there for the next three days–for Disney’s Social Media Moms Celebration! We’re talking Disney World with lots of my favorite bloggers!  Yay!

Now, let’s get to my list. I know Disney is expensive. And the shirts and stuffed animals and balloons and pins are calling for you to spend money on them. But there is SO much stuff to do at Disney that doesn’t cost a lot. Disney is more than a theme park, more than a list of stuff to do, it’s an experience. So, here are the…

TOP TEN FUN THINGS TO DO AT DISNEY WORLD WITHOUT SPENDING A TON OF {EXTRA} MONEY: 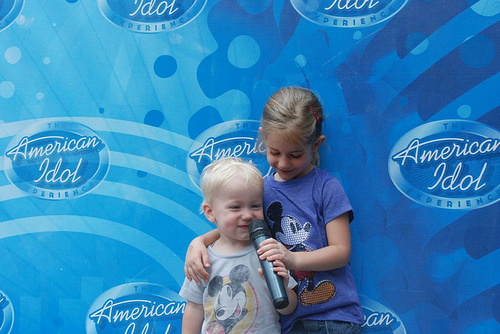 There are so many fun places to take pictures at Disney. This was outside the American Idol Experience at Hollywood Studios and the cast member there thought Asa was cute and let him hold the microphone. There are tons of other great places–outside the Sci-Fi Diner, in front of any -land sign and at any Kodak Photo Spot!

price: included in the ticket 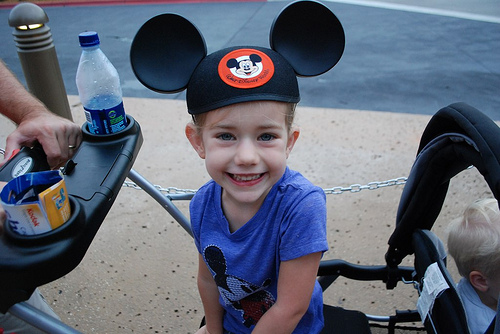 See that cute sparkly Mickey Mouse shirt Lydia has on? Well, we got it free as a gift after visiting the First Aid Station. And why did we visit the First Aid Station? Well, because when we were at the Lights, Motors, Action! Stunt Show, Les accidentally elbowed Lydia in the nose. And she started bleeding EVERYWHERE. And screaming like a banshee. So, we had to run with a bleeding Lydia to the front of the park.

Thankfully, I had put one of our hotel’s handtowels in my backpack that morning so at least she wasn’t bleeding all over the ground. But she did bleed on her clothes. Hence the new shirt. They nicely gave us a coupon for a free shirt–any shirt in the park!

Oh, but the best part was that Asa started freaking out when we got in the clinic because he thought we were at the doctor…he had just gotten his cast off a few weeks before, remember?

3. Chat with the Characters 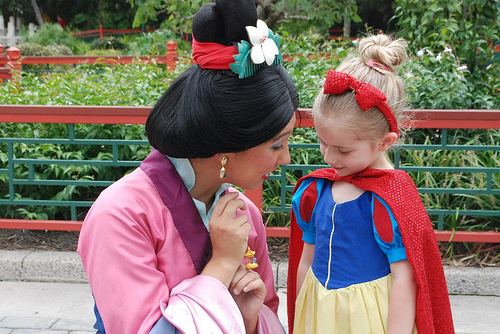 Yes, I know, you stand in line to get your picture taken with some random Orlando-ian dressed as a Disney character. But have you ever chatted with them? Next time you get face to face with a face character, ask a question. They have all kinds of great back-story to talk to you about.

We asked Mulan where her lucky cricket was and she went through this whole huge story about her grandmother and then secretly pulled out the cricket from under her dress! It was so fun! I bet she talked to Lydia for 5 minutes! 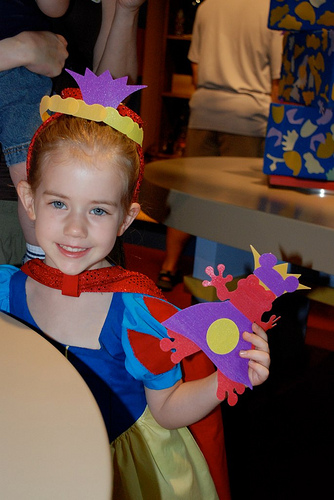 All over Disney World are small little things that seem insignificant but can be a great activity! In Innoventions at Epcot there is a VELCRO comedy stage and when you leave the theatre there is a room full of velcro frogs with clothes–kinda like a paper doll. You can dress your own frog and take it with you! We happen to be there BEFORE a show and the cast member made Lydia a velcro crown! That’s like TWO souvenirs, y’all!

Don’t rush on to the next item on the map. Spend time seeing and doing everything–you never know what fun might pop up! 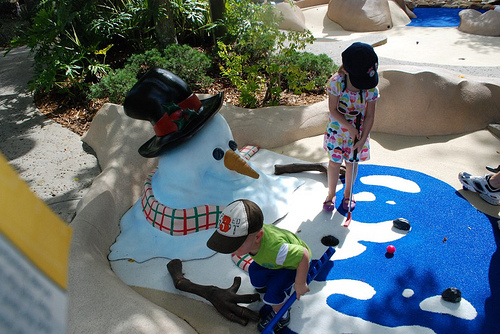 There are two great mini golf courses at Disney World. Winter Summerland is just outside the Blizzard Beach waterpark and is my fave! It’s like Santa’s summer vacation–a mix of snow and sand! There was tons of fun even for kids not so good at golf! 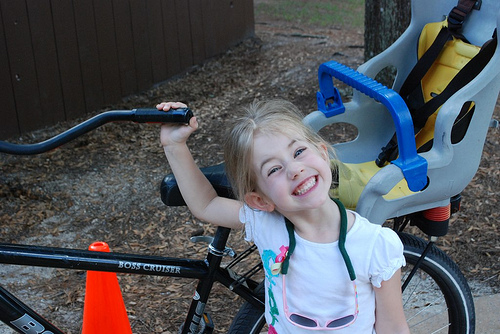 Several of the resorts have bikes for rent! This is one of my favorite memories as a kid–we always rented bikes on vacations. This year we rented bikes at Fort Wilderness. It’s such a beautiful place and you can drive in and out of just about everywhere. Asa hated the helmets and cried and kicked the entire time. (But it kinda worked out nice because he also fell asleep immediately after–one of 4 times he napped in the stroller during our 14 day trip!)

This was our ONE activity for the day–that and the Hoop Dee Doo Revue! 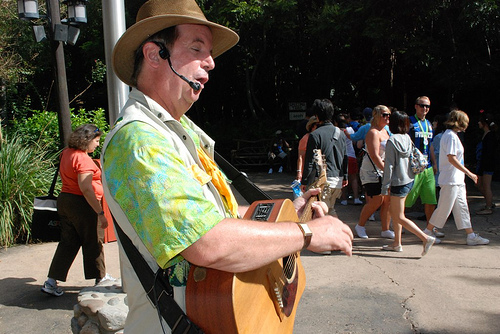 There are so many fun fun street entertainers at Disney. This is one of my faves–GuitarDan. He basically walks around Camp Minnie Mickey at Animal Kingdom and just makes up songs about you. When I saw him I made a beeline for him and sure enough, he made up a song about Asa on his birthday!

So, if you see a crowd forming, stop and listen! See what’s going on!

These are Asa’s cute toes in the sand of the beach at the Beach Club Resort. We went here for dinner and then walked around to look at their huge, amazing and awesome pool. Then walk down to the beach, rock on the rocking chairs and generally enjoy the view.

When we lived in Orlando and our friends would come to visit, we’d always drive to the hotels and walk around–especially the Animal Kingdom Lodge–there are GIRAFFES and ZEBRAS there! Every resort is like an adventure to me!

9. Play with the Maids 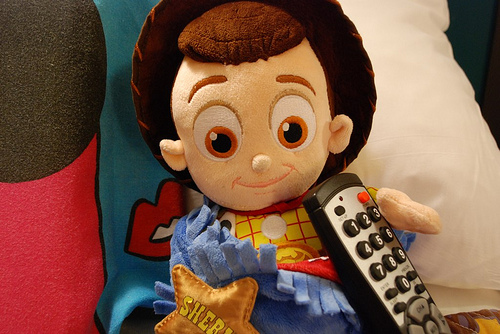 This is baby Woody sitting on our hotel bed with the remote. This is how he was positioned when we got back from our first day at the parks. Every single one of our stuffed animals (and we brought a lot–all Disney themed) were posed around the room and in our front window. The kids thought this was pure magic! They’d do the same for the maids when we left and every day was like a contest to see who could do more fun things with our room. One day the maids even left a Mickey Mouse balloon and birthday note for Asa!

OK, so we didn’t plan this, but it cracks me up! Especially because Lydia is ALWAYS posing and Asa is NEVER looking! When my brother and I were little we would take pictures in every country at Epcot–we’d just put on some of the traditional clothes/hats in the giftshop, take a picture and walk away without spending a dime! {And oh, the pictures Staci and I took when we went in High School!}

What do you do at Disney without breaking the bank?

i am not a disney employee. all thoughts are my own.