You are here: Home / christmas / The Light 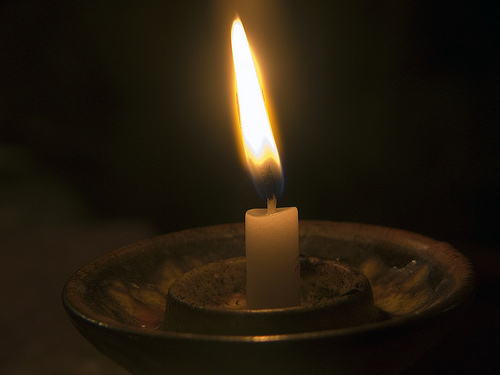 It’s December 2 and we’ve already done four of our advent calendar activities! We had to do three in one day because I am literally on the plane (free Wi-Fi from Delta and Google Chrome!) traveling to California and Operation Christmas Child! I’ll be touring their packing warehouse and learning more about this awesome ministry. {Speaking of which, have you packed a virtual shoebox yet?}

So, yesterday I grabbed 3 of the little candle papers and let the kids “pick” them from a Christmas cookie jar…basically because it was the only Christmasy thing sitting around and honestly, who uses cookie jars for cookies? (That was way confusing so we put them into our box advent calendar.)

The first thing we did was light the “advent candle”. I’m putting that in quotes because it’s certainly not traditional–it’s just a red candle inside a votive. Lydia and Asa were so excited about lighting! a! candle! in! our! house! that we had to move pass that activity pretty quickly.

Then we opened up the Bible and read Isaiah 9:2 and 6…

The people who are now living in darkness
will see a great light.
They are now living in a very dark land.
But a light will shine on them…
A child will be born to us.
A son will be given to us.
He will rule over us.
And he will be called
Wonderful Adviser and Mighty God.
He will also be called Father Who Lives Forever
and Prince Who Brings Peace.
The authority of his rule will continue to grow.
The peace he brings will never end.
He will rule on David’s throne
and over his kingdom.
He will make the kingdom strong and secure.
His rule will be based on what is fair and right.
It will last forever.
The Lord’s great love will make sure that happens.
He rules over all.

After reading, I asked them who the verse was about. Lydia shouted, “Jesus!”. I was feeling pretty good about my parenting skills with that boisterous response. Then I told them to imagine what the world was like before Jesus was born–dark, sad, lonely.

I backpedaled and tried to explain that the Holy Spirit is here now. And that He had never come to earth as a baby before this point. She was confused—and I kinda was, too.

So, I quickly moved on and I told them we were going to put blindfolds on. I had these old neck warmer thingies my husband uses when he skis. They put them on and I instructed them to find the lamb from our Little People nativity. It was less than 2 feet away from them and I honestly thought they could do it.

Well, it kind of made Lydia nervous. She doesn’t like to look silly or unsure, so she started getting aggravated. And even though I was encouraging her she started to cry. I took her blindfold off and put her in my arms, “Lydia, we’re just playing a game. We’re trying to do something fun, ok?”

Then I went on to tell her that the world before Jesus’ birth felt the same way she felt under the blindfold—scared, hard, unsure and lonely. She said, “But my friend J doesn’t know Jesus. She’s happy.”

What do I say to that?

How do I compare true happiness to laughing and playing? She was almost asking as if I were pulling the wool over her eyes. As if maybe Jesus doesn’t bring fulfillment like I’ve always told her. How can I explain that in her friends’ heart of hearts, they are full of darkness and sin and loneliness? That the forever-and-ever part of them is lost in darkness? And that in fact, her heart is the same?

I have no idea what I said. I tried to explain it. But my words fizzled out and she promptly forgot about it as we started our next activity (candle holders! tutorial coming tomorrow!). As we did our craft, I read aloud some verses about Jesus being the light of the world:

John 8:12 “I am the light of the world. Whoever follows me will never walk in darkness, but will have the light of life.”

John 12:36 “Believe in the light while you have the light, so that you may become children of light.”

John 12:46 “”I have come into the world to be a light. No one who believes in me will stay in darkness.”

John 1: 1-8 “In the beginning, the Word was already there. The Word was with God, and the Word was God. He was with God in the beginning. All things were made through him. Nothing that has been made was made without him. Life was in him, and that life was the light for all people. The light shines in the darkness. But the darkness has not understood it. A man came who was sent from God. His name was John. He came to give witness about that light. He gave witness so that all people could believe. John himself was not the light. He came only as a witness to the light.  The true light that gives light to every man was coming into the world.”

As I read, I prayed that the metaphor would stick. That Lydia would understand the darkness of our hearts. That the only way to truly see is to have the light of Jesus. I prayed this Christmas season Lydia would see Jesus’ birth not just as a celebration of some mythical Jesus’ birthday but as the real Savior coming to rescue her and her alone.

❮ ❮ How Being A Mom Is Like Being in a Sorority
Christmas Candles with Sand Art! ❯ ❯