You are here: Home / me / Tattletale 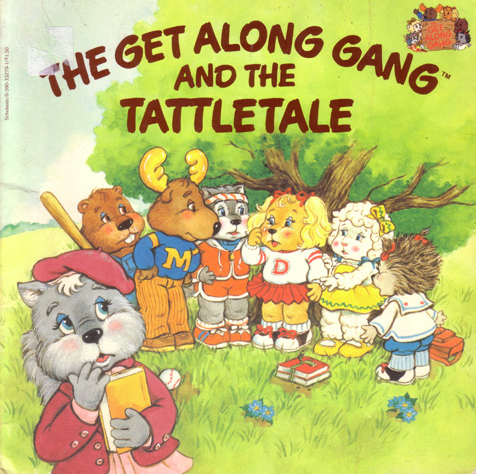 (I just randomly found this image online. Remember the Get Along Gang?!)

My daughter is 4. My son will be 2 in two weeks. And we have come into the new season of TATTLING! At first, Lydia would just tell me things Asa was doing–“He’s putting a rock in his mouth!” or “Asa has scissors!”. But now it’s every. single. thing. She says, “Asa just touched my book!” or “He is pushing his foot on me!” or “Asa took my doll!!”. And as much as I want her to keep me updated on if Asa is about to put his finger in the electric socket, I do not need a running commentary on his every move.

I remember reading something (maybe from Have a New Kid by Friday?) about parents staying out of sibling squabbles. It seems a little backwards because we want to lead our kids in the way they should respond to each other. But the idea was that it’s not just about teaching kids how to respond, it’s teaching them to figure out on their own how to respond. A sibling squabble allows kids to interact with each other—it’s THEIR problem. They don’t need to run to Mama and let her sort out all the problems–kids need to solve problems for themselves.

As a former substitute teacher (ok, only for a few months, but still, it does teach you a few things about kids), I remember one of the main things that got on my nerves struck me was that kids could do nothing without asking the teacher to fix it. “He’s on the slide!” or “She took my pencil!” or “I was sitting there first!” One of the teachers I worked with had a picture of a turtle on her desk. When the kids came to tattle on one of their classmates she told them, “Tell the Tattle Turtle.” She wouldn’t even listen to their complaint. It was not her problem–those kids were waaaay old enough to solve a simple problem like moving to the other side of the playground, or choosing a new place to sit.

Leave a comment, I’d love to hear your suggestions!