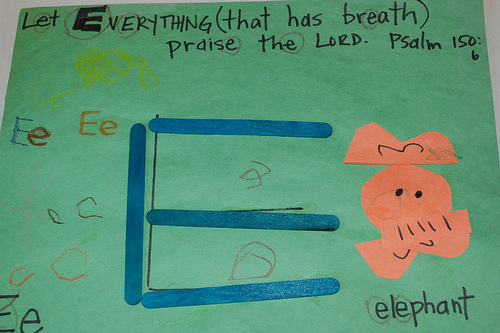 Ah, the letter E! I actually like this one. I thought I was so creative because although this verse doesn’t actually begin with the letter E it has 6 inside of it! You can see I let Lydia circle (ok, I circled them) each letter E and then let her draw some E’s. So, even though it’s not exactly an “e” verse, I still think it’s a good one to learn and practice. Not just that we’re all created to praise, but that we need to be purposeful in doing so!

I really liked making the letter E from popsicle sticks. You could do this with any letter—as long as you don’t mind some block letters.

But my favorite is the elephant. What, you don’t see it? It’s that little orange hamburger looking thing on the right. I cut out a head, two ears and a trunk. Then I let her piece it together. I’m not sure if it was my horrible artistic skills or the fact that my daughter was just 2 years old, but she did not put that animal together correctly! I didn’t correct her because I thought it was cuter her way!

I actually think this would be super cute to do for kids–make your own animal puzzles. You could cut out a few circles, some rectangles and triangles and let the kids make their own animals. Here’s a few we tried out today:

Pretty cute, right? Maybe I’ll try some ears and trunk and see if my  now 4 year old Lydia can put together an physically correct elephant!