You are here: Home / me / TGIFAYKMIAOOTBLT

I don’t even remember what that title stands for. It’s something like WHAT?! IT’S FRIDAY? HOLY TOLEDO. I’VE GOT NOTHING DONE THIS WEEK!

Yesterday I met Mandi and her kiddos at her parent’s pool. Isn’t it nice to have a private pool? It *almost* made me want one. Almost. I do wish I had my camera yesterday, though. Her son and Lydia were pretending to be divers. (Which is hilarious because Lydia won’t put her head under the water.) They had on goggles. And flippers. And they put those diving sticks in their mouths like scuba gear. So adorable.

Anywhoo, Mandi and I apparently couldn’t get enough of each other because we met up at Chick-fil-a…wait, their Wi-Fi was out, so we went to the library…oh, but they closed at 9, so we found a Starbucks and started brainstorming about a super fun, super cool CHRISTMAS blog adventure. (Yes. I said CHRISTMAS.) Are you so excited? I AM! We’ll roll it out in about a month. Just know in your head that you are going to love it.

Uhm. What other randomness did I want to tell you today? Oh yeah, ASA IS STILL NOT WALKING. He refuses. His crawls. He scoots. He whines for me to pick him up. But walking? Not so much. Has anyone else had a cast? How long before you can use your limb again? This is getting frustrating! 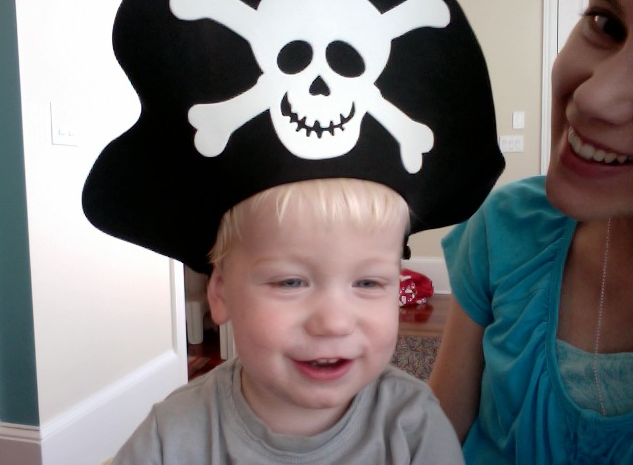 And that’s really all I got for you…except for a really awesome pirate-y guest post at The MOB Society by yours truly. A special activity I did just for my little pirate. (I miss calling him “the pirate”…maybe I should start again? Pirate puns are fun. Avast ye, me hearties!)

Also. Two points for the most creative translation/interpretation of my post’s title.