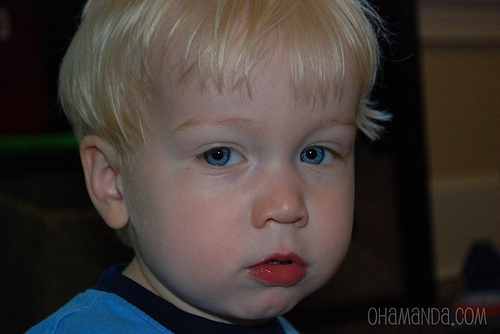 Monday night we took Lydia to Chick-fil-a as a way to honor her courage during the fireworks the night before. You might remember that Lydia is ridiculously freaked by loud noises–fireworks, thunder, etc. We were dreading the fireworks on the 4th and Lydia was so brave. She stayed in her bed calmly, she sang songs so she could remember to be brave (and to drown out the noise), it was precious!

After we ate (another Spicy Chicken for me!) the kids played on the playground for awhile. Asa was sliding down the slide in Lydia’s lap and his little foot got stuck underneath him (think hamstring stretch/split). He cried and screamed like nothing I’ve ever seen him do before. And from then on he wouldn’t play or get out of my arms. One time when I set him down, I thought he was kinda favoring his foot and not wanting to set it down. But it was late and his foot wasn’t swollen or red so, we put him to bed and prayed it would be ok in the morning.

Well, the next morning it wasn’t better. He wasn’t even standing in his crib. He wouldn’t put any weight on it and would barely crawl. We called the doctor’s office and an answering service answered. We told them the problem and they said a nurse would call within the hour. She called within 5 minutes and suggested Asa’s leg was fractured. So, we woke up Lydia, got ready and drove to 15 minutes away to one of two locations our pediatrician offers. No less than 4 friendly nurses and doctors helped us as they checked out Asa’s leg, weighed him and gave him Motrin. They said he definitely needed x-rays.

So, we drove less than ten minutes to an x-ray technician. They held my poor little boy down on the table and x-rayed his leg (THREE TIMES!). He was not a happy camper. But I was happy when they told me it was NOT a fracture. The doctor said it’s probably a muscle strain and I was to give him motrin and call them in a week if it wasn’t better.

Well, it’s day 3 and he’s still not walking on it. Every once in awhile he’ll hold his leg up and say, “Huuurt.” It’s pitiful.

But as we were traveling back and forth between doctors and x-rays and pharmacists, I thought, “What if it was a fracture? What would I do if I lived in a place where I couldn’t get to a doctor? What if he was never able to be treated? No cast? No splint?” What would I do? What would happen to my son? Would a little injury at 1 year old bother him for the rest of his life? What if it impaired his ability to walk? to run? to play?

This morning I was listening to Richard Stearns’ The Hole in Our Gospel. He began to discuss the main problems developing countries have–no, not genocide or corrupt governments but things like no access to clean water and death from preventable diseases.

Did you know every 30 SECONDS a child dies from malaria? Malaria has been eradicated in the US since the 50’s.

And here I am calling a doctor’s answering service, talking to a nurse, seeing a doctor (and a half dozen other nurses) and several x-ray technicians in the matter of a few hours because my son hurt his leg on the slide of a fast food restaurant! While 1 in 6 people in the world don’t even have CLEAN water? Or are threatened by a disease my kids will never even hear of?

I’m not saying I should NOT use the doctors our country has been so blessed to have. It just makes me realize the huge blessing I have. But even more it makes me realize that I can do something about it. I spent $40 on my co-pay for Asa’s leg. It only costs $100 to provide a well for clean water that would benefit about 300 people! It only costs $35 to sponsor a child for a month.

I feel so serious as I write this. Seeing the disparity between my life and the life of the majority of the world. That my child can receive x-rays in minutes when I fork over $40 (that I won’t even miss!) while thousands of children die each day from preventable causes (things like diarrhea and pneumonia). It should not be so. In a world where money is transferred instantly, food can be grown anywhere and people can travel across the globe in hours there should not be such a wide gulf between those that have TOO much and those that have NONE. 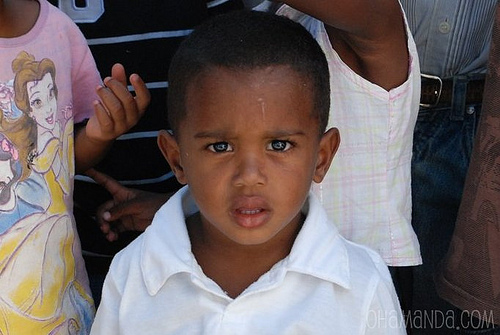 a little boy in the dominican affected by HIV

I want to shout EMPTY YOUR POCKETS and GIVE! FOCUS YOUR LIFE and YOUR KIDS HEARTS on HELPING OTHERS! STOP CARING ABOUT THE EMPTY and FINITE! REALLY STOP AND HELP SOMEONE! I’m not just shouting this at you…I’m shouting it at my own heart and life.

Instead I’ll ask you to do what I’ve been doing–get educated. Read websites, find ministries and organizations that are making a difference, find statistics and then choose how you can do something active and immediate for your neighbor.

Here are some organizations I admire:

World Vision
Richard Stearns is the president of World Vision. The above statistics are from his website. You can find more stats and ways to give there. You can also read my experience with World Vision in the Dominican Republic. Or you can just bite the bullet and sponsor a child. (<—-please.)

Compassion International
I sponsor two children in Burkina Faso through Compassion. They have changed my life. I pray I have changed theirs. I also help fund a Child Survival Program in Haiti. If you would like to see first hand what Compassion does you can read several actual trip reports from some of my favorite bloggers.

Samaritan’s Purse
They may be best known for Operation Christmas Child but they do so much more. I receive Samaritan’s Purse monthly newsletter. I am always impressed and amazed at their reach around the world and in the United States.

And to close, I’m going to share a scripture. I’ll admit, I usually skip over scriptures in blogs because I figure I’ve already read it and know the story. But will you stop and read? Really read?

In reply Jesus said: “A man was going down from Jerusalem to Jericho, when he fell into the hands of robbers. They stripped him of his clothes, beat him and went away, leaving him half dead. A priest happened to be going down the same road, and when he saw the man, he passed by on the other side. So too, a Levite, when he came to the place and saw him, passed by on the other side. But a Samaritan, as he traveled, came where the man was; and when he saw him, he took pity on him. He went to him and bandaged his wounds, pouring on oil and wine. Then he put the man on his own donkey, brought him to an inn and took care of him. The next day he took out two denarii  and gave them to the innkeeper. ‘Look after him,’ he said, ‘and when I return, I will reimburse you for any extra expense you may have.’

“Which of these three do you think was a neighbor to the man who fell into the hands of robbers?”

The expert in the law replied, “The one who had mercy on him.”

Jesus told him, “Go and do likewise.”