You are here: Home / me / On Amphibians and Sleep 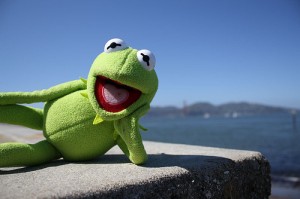 I’m tired. It’s been raining for like 13 days here. (Well, two anyway.) Yesterday there was even thunder. And you may remember that Lydia is TERRIFIED of thunder. So, last night I was half awake listening for the thunder and her cry. (That’s some serious faith in my daughter, isn’t it?) Anyway, I heard thunder three times. She only called out once. My husband checked on her (love him!). Still, I couldn’t sleep. I kept hearing THIS NOISE.

It was kinda like the whining of a machine. Or maybe a baby? It was a weird high-pitched sound that crescendoed about 75 times a minute. Les and I laid in the bed contemplating what it might be…broken humidifier in the kids’ room? an animal howling outside? an alarm?

Finally I made asked my husband to get up and check it out. He opened our back door, immediately turned around and said, “It’s a frog.”

Frogs say RIBBIT. This was not RIBBIT. This was more like eeeEEERRRIIIIIIIIBBBBBBEEEeeeeEEEETTTttttTTTT. Every once in awhile that little froggie would take a break (probably ambling closer to my window) and I’d fall asleep. Then I’d slightly wake up to hear him in the background—far far away. I’d fight myself to go back to sleep, “DON’T LISTEN TO IT! DON’T LISTEN!” But it was too late, my mind would pinpoint the sound and suddenly it was so loud I couldn’t sleep. Again. I think when all was said and done, I spent about 4 hours sleeping and about 4 hours listening to that frog.

“It ain’t easy bein’ green.” Hmph. I’d like to deliver on that promise.

photo by kermit on tour, which is hilarious and worth a click.