You are here: Home / me / Alliance Theatre: Disney’s Mulan (Reason #842 Why I Love Atlanta) 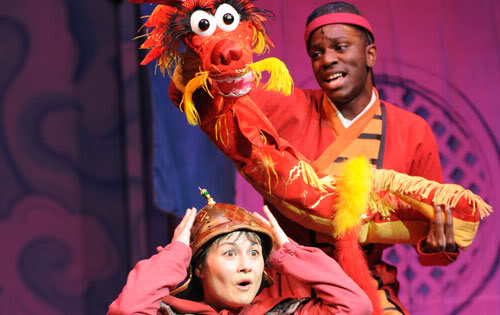 We went to the Alliance Theatre in Atlanta to see the theatrical version of Disney’s Mulan. And can I just say that it was like every single thing I loved all wrapped up into one?

The Alliance Theatre is one of my favorite places in Atlanta anyway. It’s part of the Woodruff Arts Center and it just feels metropolitan and swanky and Atlanta-ish. I love it. It’s a cozy theatre that doesn’t have a bad seat.

Our seats were row A. We walked straight down to the first row and felt a little stupid because we could not locate seat 130. We walked up and down the front row at least 3 times. And the whole time all I could think was, “Oh my goodness, we’re going to sit on the front row with a 1 and 4 year old. A 4 year old who hates loud noises, surprises and scary costumes.” Finally we realized our seats were row A on the BALCONY. Oops. But much better for our little girl who needs to be eased into new adventures.

However, I did not need to worry about the scariness. Every scary part was handled with such creativity! Let’s rewind a bit…in case you don’t know Mulan is the story of a Chinese girl who poses as a man to join the army and fight for the emperor. Mulan’s anscestors play a big role…but how do you show ghostly figures in a play?

How ’bout by using puppets?! The actors had huge backpack puppets that waved and glided above their heads while they spoke and manipulated the arms. I love this type of puppetry and love seeing it in theatre.

Each of the actors (except Mulan) played at least one other part. In fact, the entire show was done with just eight actors! EIGHT! They were are all very funny and great at jumping from character to character. Lydia’s favorite was Mushu and Mulan, of course. Because Mulan is basically a princess. And princesses are always a fave.

The show had some original songs in it that don’t appear in the movie. And they had to change some of the story line to make it work on stage. But I think it really added to the story. There was a whole male-female-yin-yang thing that really worked. And that’s not even my thing—but it kind of fleshed the story out even more.

It was a 70 minute show with no intermission but Lydia and Asa were mesmerized. (OK, I had to give Asa some pretzel sticks and a cup of milk to keep him quiet.) We laughed and I may have even had a tear in my eye when Mulan’s dad said, “The greatest honor is having you as a daughter.”

Then the best part came afterwards–since it was the opening day they had a huge Chinese celebration in the lobby. We got a passport and then had it stamped at every station. The Center for Puppetry Arts helped us make a shadow puppet dragon. The Atlanta Zoo let us pet a snake. The Atlanta Symphony let the kids try out any instrument they wanted. They had fan dancers, sword fighting demonstrations, face painting, animal balloons, actor autographs and more. We had an absolute blast. It made the story come even more alive for Lydia. And it totally made me want to have a Mulan birthday party!

If you are in Atlanta, you will want to take your kids to see Mulan. It’s a great story, told with such creativity and being at the Alliance Theatre will make it an adventure in itself!

Disclosure: Complimentary tickets were given for the sake of reviewing the play.